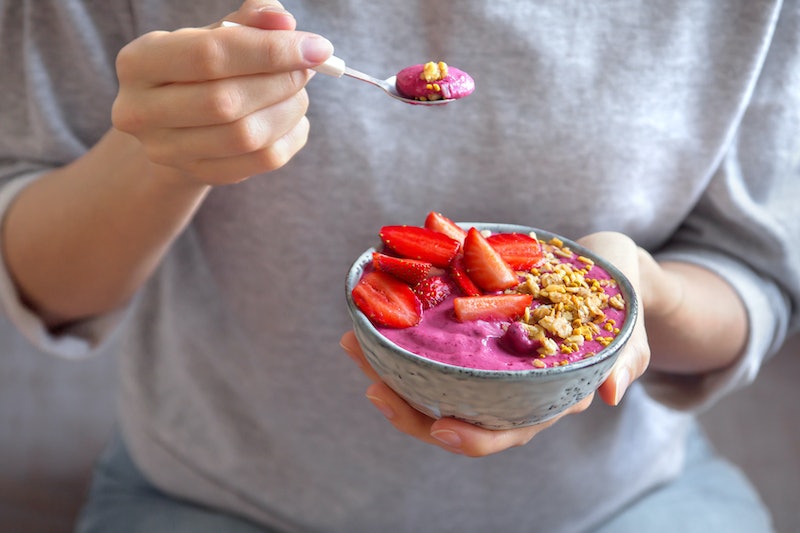 Researchers surveyed people between 18 and 29 years old and people who were 30 years old and older. They asked them to fill out an anonymous questionnaire about their diet and foods that are linked to changes in mood. After analyzing the data, researchers found that young adults reported benefitting benefited from frequent meat consumption, which can improve brain function. But the story was different for older adults, who need food that increases the antioxidants in your system (antioxidants can help avoid cell damage) for optimal mental health. People over 30 also reported feeling better when they avoided coffee and skipping breakfast, according to the research. What you eat can affect mental health, but if you're looking for resources to help improve mental health issues, it's always best to talk to a medical professional.

Lead author Lina Begdache, who is an assistant professor of health and wellness studies at Binghamton University, said in a press release that one of the study's biggest takeaways is that diet choices will affect people differently depending on how old they are.

"One of the major findings of this paper is that diet and dietary practices differentially affect mental health in young adults versus mature adults," Begdache said. "Young adult mood appears to be sensitive to build-up of brain chemicals. Regular consumption of meat leads to build-up of two brain chemicals (serotonin and dopamine) known to promote mood."

The most effective way to handle mental distress is talking to a doctor or therapist who can help you figure out your options. But if you're looking to adjust your eating habits to support your mood and you're under 29 years old, exercise and meat consumption may be the way to go. The researchers found that people who were sedentary and ate meat less than three times a week "showed a significant mental distress." If you're not a meat eater, you can try foods like nuts, avocados and dark chocolate to get a dopamine release. For people over 30, antioxidants are a major key. It's never a bad idea to consume antioxidants, but the effect is more profound as you age. As you get older, your body produces oxidants that can cause disturbances in your brain chemistry, so eating foods with antioxidant qualities can help avoid unnecessary mental distress. The next time you're at the grocery store, pick up some grapes, blueberries, sweet potatoes, and green vegetables like kale and broccoli, which can all help improve mental health.

The study shows that there's no one-size-fits-all approach when it comes to diet and mental health. Your brain changes as you get older, so it makes sense that you may need to make adjustments to your diet as you age if you choose to include foods that support your mood. It's not always realistic to eat healthy foods, especially because eating regular meals and keeping a balanced diet is a hard adjustment to make for people who are mentally healthy, let alone those who already deal with mental illness. Healthy foods can also be inaccessible to people who can't afford them, or who live in food deserts. But if you are looking for ways to change up your food routine with an eye toward your mental health, this study is something to keep in mind. I have a few years left before I need to avoid coffee, so I'm going to enjoy it while I can.