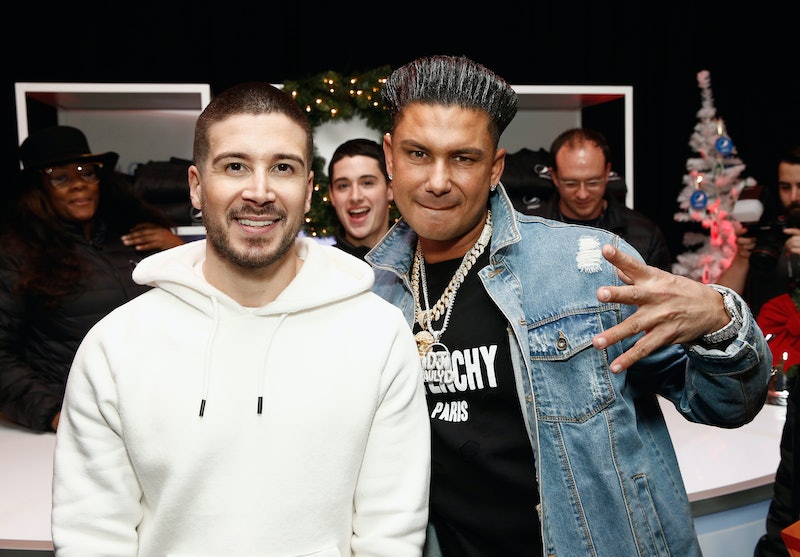 Entertaining as it may be, the trailer for A Double Shot At Love with DJ Pauly D and Vinny doesn't do a great job of explaining how the show works. Between the flying rose petals and sleeveless tuxedos, we don't get a lot of information about the actual format. Which is not to say the trailer isn't funny — just that you'll need a bit of an explainer before watching the show.

As the promos have suggested, Double Shot is kind of like a Jersey Shore version of The Bachelor. Think less grand romance, more funny antics. That doesn't necessarily mean Pauly and Vinny aren't as serious about finding love, but it makes sense that they'd tailor the show to who they are. The pair has always liked to goof around, and that seems to be reflected in the way Double Shot works.

As in The Bachelor, a bunch of singles arrive at a mansion looking for love, but the Double Shot house has a tanning bed. And while, according to the show's official description, Pauly and Vinny get to decide who goes home each week, the women have some say-so, too — they get to choose if they want to date Pauly or Vinny.

In an MTV Cribs-style video to promote the series, Vinny and Pauly give fans a tour of the Double Shot house, which does provide some more context about the show. They point out the bar "where everyone is gonna come take 'shots' at love," Vinny says, and the half-moon couch that comfortably seats exactly 20 ladies and two guidos. "This place is where the cab ceremonies will take place," Vinny explains. He and Pauly go on to stage a mock version of one of the ceremonies. "Vinny, please come down to the cab ceremony," Pauly says. "Vinny — awkward pause — your cab is here."

Based on their recreation, similar to a rose ceremony on The Bachelor, it sounds like the contestants will gather each week for an exit ceremony. Then, one of the guys will reveal if a cab (in lieu of a Bachelor-style limo) is or isn't there to take them home. It's definitely not as romantic as receiving or not receiving a rose, but hey, at least it's upfront.

In the house tour video, the guys also show off the smush room (because it wouldn't be a Shore house without one), as well as the in-house barber shop, where they'll apparently have all their conversations about "who's staying and who's going home."

There are so many things that could happen once all 20 girls are in the house and so many ways the show could go. The only real way to find out how it works is to watch on Jersdays at 8 p.m. ET, starting on April 11.