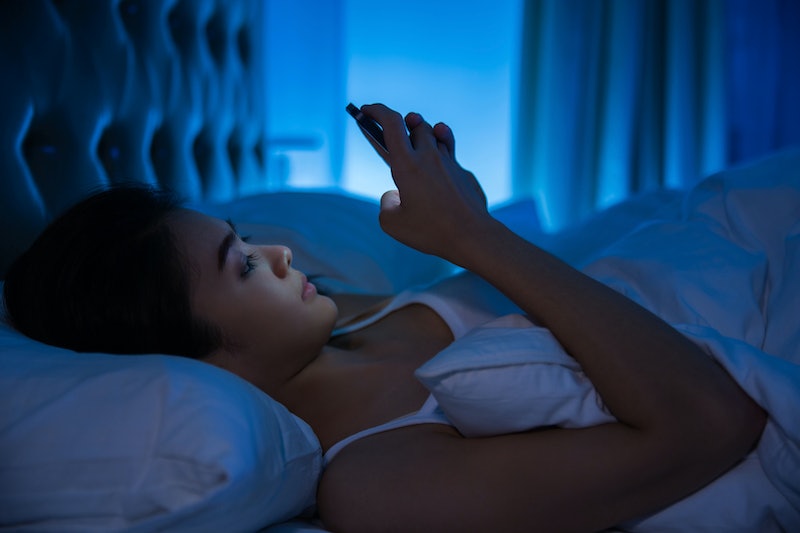 If you have trouble sleeping, you're far from alone. According to the American Sleep Association, between 50 and 70 million adults have a sleep disorder, and up to 20 percent of those folks have serious insomnia, with periods of trouble sleeping lasting up to three months, the American Academy of Sleep Medicine reported. Struggling with insomnia can mean getting trapped in a cycle of anxiety that can literally train your brain not to quiet down when you're preparing for or are in bed. But it can give us more than psychological effects. Insomnia can affect physical health, too.

Though we often notice the mental issues that come along with insomnia — being unable to focus, having a snappy temper — the long-term physical toll insomnia takes on us isn't often something folks consider. In fact, insomnia's physical effects on us weren't explored until recently, according to a study published in 2014. That study found that physiological consequences of insomnia involve hyperarousal of the body's systems, which can lead to "cardiometabolic and neurocognitive" issues. Some of those common issues are hypertension, diabetes, cognitive impairment, and, ominously, a general "increased mortality."

WebMD also has a pretty serious list of potential health problems, which includes heart disease, heart attack, and heart failure, along with an irregular heartbeat and increased risk for stroke. And if you have insomnia plus other health issues, you're in company: WebMD estimates that 90 percent of insomniacs also have another health condition.

Along with these critical health problems, insomnia can have effects you may not expect, and which may not seem as serious, but should still be considered and addressed, including skin problems. Though many "people have experienced sallow skin and puffy eyes after a few nights of missed sleep," those are only the short-lived cousins of what can really happen, says Camille Peri, writing for WebMD.

Peri adds that when you've got insomnia, your body releases more of the stress hormone cortisol. Cortisol is an essential part of our parasympathetic nervous system's response to stress — aka, the "fight or flight" response. When our parasympathetic nervous system is repeatedly triggered and can't shut off, cortisol continues to flood our system, putting us on edge and making us feel like we constantly need to choose between fight or flight. And feeling wonky isn't all it does; cortisol can also break down skin collagen, "the protein that keeps skin smooth and elastic," Peri says.

Insomnia affects the amount of human growth hormone in our bodies too, which, when we're finished growing, switches from helping us reach adulthood to helping "increase muscle mass, thicken skin, and strengthen bones," Peri writes. Human growth hormone is also "part of normal tissue repair — patching the wear and tear of the day," Dr. Phil Gehrman told WebMD. It's only during deep sleep that this hormone is released, he adds. So if you're experiencing regular insomnia, either the kind where you can't get to sleep at all, or possibly even more frustratingly, do manage to get to sleep, only to wake up an hour later, or repeatedly wake through the night, you're not sinking into the deep sleep that would produce what your body needs. And your body becomes less able to repair the damage that simply living causes it.

It may not surprise you that the physical toll insomnia takes can feel a lot like the mental toll: It wears you down over time, reducing your ability to bounce back from daily stressors. That's why it's important to get your insomnia, whether it's occasional or chronic, checked out asap, and to work out a plan with your doctor to help get you back to a regular sleep schedule. Common treatments for insomnia involve medication and cognitive behavioral therapy, where you can alter your thought and behavioral patterns to help you disassociate going to bed with anxious or frustrated feelings resulting from previous experiences of not sleeping.

But however you and your doctor decide to treat your anxiety, remember that whatever treatment you pursue likely won't be an instant fix. Not sleeping is rough on your mind and your body, so when you're trying to break the cycle and prevent its physical effects, remember to be gentle with yourself — because insomnia won't be.