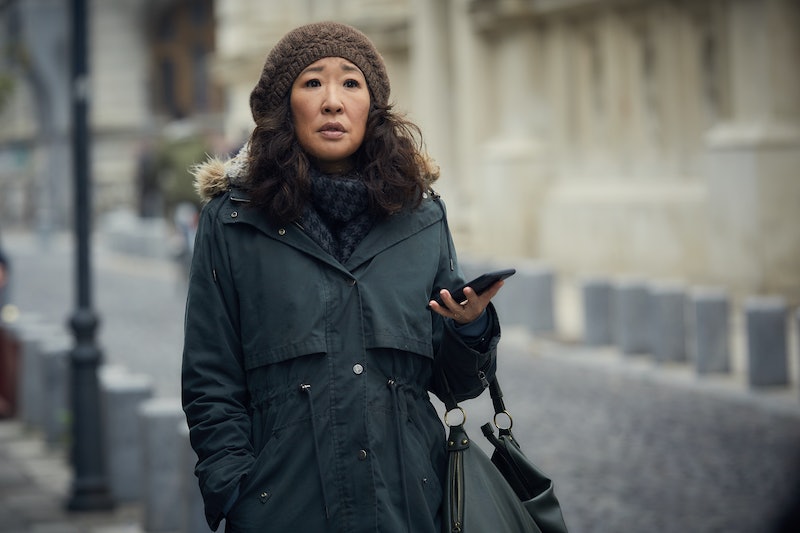 If all you can think about lately is Killing Eve, you are not alone. The BBC America drama starring Sandra Oh was brought over the UK after taking the States by storm. In case you haven't seen it, the first series ends on a major cliff-hanger (no spoilers yet, don't worry). But said cliffhanger will probably have been a tad confusing for those that have read Codename Villanelle by Luke Jennings (aka the book on which the show is based) because the two are so different. With that in mind, how does Killing Eve the book end?

Well, the book certainly doesn't take the same path as the TV show, that's for sure. In fact, at the end of Codename Villanelle (which was first published as a novella titled Odessa), Villanelle (Jodie Comer) tries to free her mentor from a fortified mansion in the Ukraine, and, spoiler alert, Konstantin (Kim Bodnia) dies pretty early on and gruesomely in the book too. Unlike the TV show, in Codename Villanelle , Villanelle is yet to send a suitcase of clothes Eve's way, and the novel ends in a way that seems to set up the relationship between Eve and Villanelle (maybe like the one's that been shown on TV).

So, why are the book and TV show so different? Well, that's all down to script writer Phoebe Waller Bridges. When Jennings first met Bridges, who also penned revered comedy Fleabag, they immediately hit it off. In fact, Jennings described the meeting to the Guardian back in August, remembering how Bridges exclaimed, "Oh god I looooooved it. It’s suspenseful, dark, cruel, sexy, glamorous, dirty, clinical, epic and immediate all at the same time. Villanelle has captured my imagination completely," after she first read his novella. During the writing process, Jennings and Bridges proved to be a "great combo", as Jennings gave Bridges the go ahead to "run with the concept and make it her own," Jennings recalled. And this is why the TV show sees a bit of a departure from Jennings' novella.

Luckily for the viewer, Bridges took a fair few liberties with the material. Like, for instance, Eve and Villanelle aren't introduced until much later on in the novel. But thankfully, Bridges doesn't beat around the bush. As the Mirror pointed out, the characters have hardly even had a conversation with one another in Jennings' novellas. But in the show? Well, there's plenty of face to face meetings and sexual tension that's off the chart, and maybe even a stabbing or two.

Also unlike the show, is Jennings' unravelling of The Twelve. Bridges has kept up the mystery, and viewers who haven't read the books won't know much about the shadowy Twelve, who they are, or where they came from. You also won't find that excruciatingly tense stabbing scene in the novellas either. In fact, Jennings left things at the Italian Opera, where Villanelle successfully assassinated Greco, in a similar way to what she did in episode one of the TV show.

If you've finished Killing Eve the TV series and you're not sure what to do with yourself thanks to that long wait until the next season, you might as well get yourself some copies of Jennings' novellas IMHO. With his next book out in late October, you can get your next fix of Eve and Villanelle sooner than you think. So get involved, people.