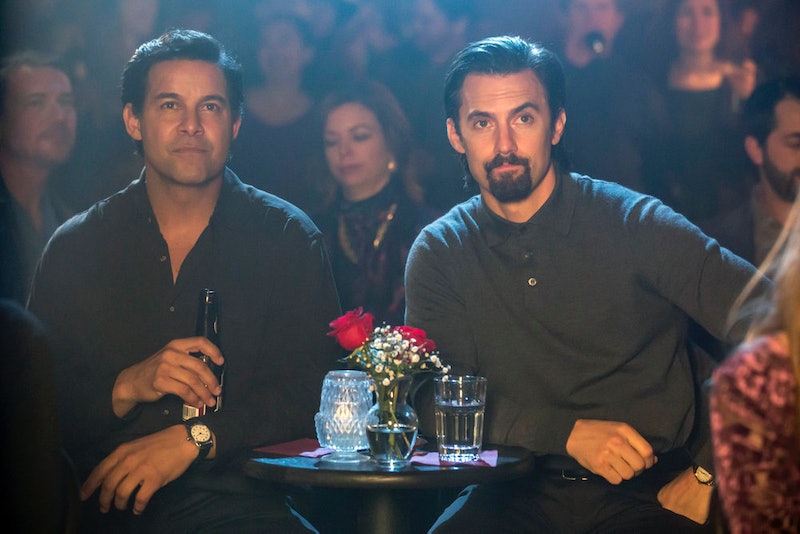 The one show that is seemingly on everybody's lips lately is This Is Us. It's dramatic, funny, and manages to make me cry every week. Oh, you too? Well, one quibble I have with the show is how Miguel ends up with Rebecca. We're nearly done with the first season and we have yet to see any romantic spark between these two. Aside from the occasional burst of chumminess in flashbacks, there's hardly any reason to believe that Miguel and Rebecca would ever end up together.

Fans have offered up some theories about how Miguel ends up with Rebecca and boy, does it get dark. But there's one that I thought was particularly beautiful that I stumbled across on Reddit that actually sounds like it would work, given what This Is Us has established with its story and characters.

On the This Is Us subreddit, harmony30 proposed this theory on how Rebecca and Miguel get together:

I think Miguel and Rebecca eventually came together because of their love and respect for Jack. There is noone [sic] else in the world that admires or really gets Jack, besides Miguel and Rebecca. The kids only see dad as dad and although they share the pain of losing Jack, I don't think it is comparable to Rebecca and Miguel's loss. [...] He misses his best friend just as much as Rebecca misses her husband. It makes alot [sic] of sense for Miguel to be involved with the Pearson family and to hopefully pass on things that Jack has told Miguel but not necessarily to the kids and to be their 'father' figure.

It not only sounds plausible, but it matches the version of Miguel we met in "Jack Pearson's Son."

In "Jack Pearson's Son," viewers were given the chance to sympathize with Miguel, who up until this point had been show as a kind of "pathetic stepdad" who somehow hadn't earned the love and affection of his stepchildren despite having been their stepfather for years. In the episode, we saw a side of Miguel that was kinder and a side that proved he was as good a listener and counselor as Jack (both in flashbacks with Jack and in the present day timeline with Kevin). Even with this more sympathetic side of Miguel unveiled, it's tough to understand how Rebecca could have ever "replaced" Jack with Miguel.

Which is why harmony30's theory works so well. Rather than theorizing that Miguel may have been with Jack the night he died and then got together with his grieving widow, harmony30's observation fits in precisely with the characterization of Miguel thus far. Additionally, when you consider that Rebecca still wears the crescent moon-shaped necklace Jack bought for her in the '80s, theories around Rebecca and Jack divorcing before his death kinda fall apart.

It makes sense that in the wake of Jack's death, Miguel and Rebecca came together to mourn him and perhaps they found a new connection to one another in their grief. Arguably, nobody would understand (not even Kate, Kevin, and Randall) just how deeply the death of Jack would cut Miguel and Rebecca except them. Furthermore, this kind of relationship, born of total grief, would fit with the kind of emotional rollercoaster that This Is Us has been built on.

That said, we won't actually know more about Miguel and Rebecca until This Is Us decides to tell us. So, This Is Us, can you just devote an entire episode to these two lovebirds already so we don't have to keep theorizing? Thanks a bunch.