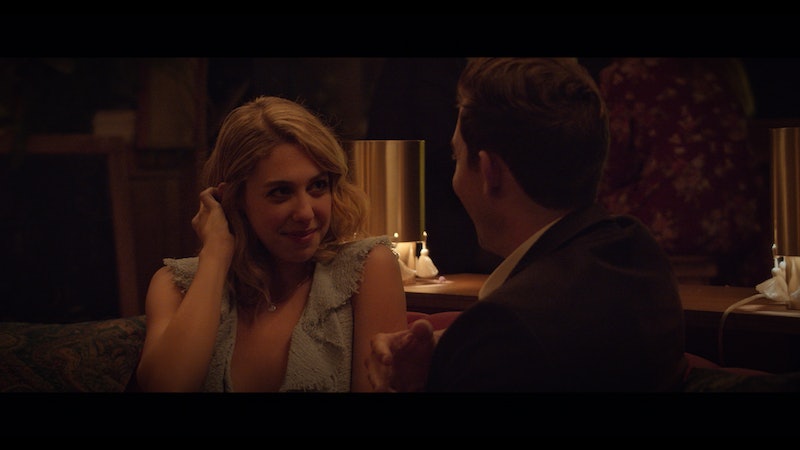 If it's been a while since you've been on a first date, Dating Around will instantly bring back all those familiar jitters. And if you're preparing for one, you may find yourself watching through your fingers with anticipation and glee — the same feelings everyone experiences when testing the romantic waters with someone new. The Netflix reality series, releasing on Valentine's Day, is a more realistic and diversified take on the typical dating show, which might make you wonder how Dating Around works. Like, where did they find these people? How do they choose the dates? Did any of them actually end up together? There are so many questions left unanswered.

First of all, anyone hoping for a Bachelor substitute should kindly look elsewhere, as the show is nothing like ABC's Monday night staple. The only feature they share is a bunch of hopefuls looking for love, but that doesn't mean it's not worth watching. In a way, Dating Around is slightly reminiscent of MTV's Next — yes, the circa-2005 show in which dates were treated like samples of ice cream; if the suitor didn't like date number one, he or she could call the magic word, "Next!" and another person would run off the awaiting Greyhound bus.

In Dating Around, there are no buses, and its speed dating process is much more sophisticated and real. In each episode, a different New Yorker is set up on five blind dates in a city hot spot, and they each begin with a round of drinks to break the ice. Things get interesting when you notice that all five dates are invisibly cut together and appear as if they're taking place concurrently. Obviously, they're not, but it allows you to begin comparing the experiences almost immediately. Just when one conversation becomes compelling, editing cuts to another date, and then you're hooked.

To assist in seamless editing, the suitor, who is the episode's constant, wears the same outfit to all five dates. They all appear to occur at the same time of day, which makes you wonder if they were filmed on separate nights. Regardless, it makes for an intriguing format that's at times cringe-worthy, and other times wholly endearing.

After drinks — a few tequila shots, per the first episode — each pair moves on to dinner. There, they tend to dive into deeper conversation about their careers, love lives, goals, and aspirations. You even get to watch them order their food and eat it in real time, which seems weirdly vulnerable and telling, considering no one ever actually eats during The Bachelor one-on-ones. After all, there are few better ways to bond than over food.

Then comes after hours, to which not every date is invited. Sometimes, one of them may not feel a connection and decide to end the night early. ("I don't think we're soulmates," one date says as she calls her Lyft. "But I know we'll be friends.")

Where some dates end, though, others are just beginning. The couples start feeling the warmth of the booze that began the night, and they're getting more comfortable with each other, which often leads to more booze. The grueling first kiss anticipation seeps through the screen — sometimes it happens, and sometimes it doesn't. Before they know it, sunrise is approaching, and it's time to share a ride home.

Will there be a second date? That's not revealed during the cab ride, but instead at the end of the episode. It's a new day, and in a cinematic cityscape reveal, the suitor approaches his or her choice for a second date — if there is one, that is. By this time, you find yourself attached to the people looking for love, but unfortunately, we don't see where they are post-filming. Slightly disheartened, you resolve to hitting play on the next episode, and the cycle begins once more.