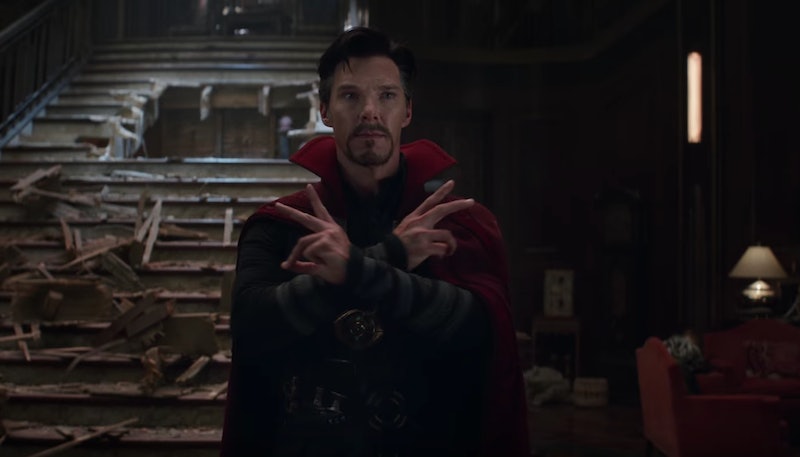 Avengers: Infinity War might be the most secretive Marvel movie ever to hit theaters. The plot of the third Avengers film is so top secret, only Doctor Strange star Benedict Cumberbatch has even admitted to reading the entire script. Coincidentally, this one admission has launched a massive fan theory that time travel will feature heavily in the next two Avengers film. And if you haven't seen Doctor Strange, you're going to be wondering how the Avengers: Infinity War time travel works.

Time travel has never really been huge in the MCU. Yes, movies like Iron Man 2 and Captain America: Civil War are dependent on flashbacks to make a complete narrative, and, yes, the time jump between Captain America: The First Avenger and The Winter Soldier sort of feels like time travel. But time travel had never been crucial to a MCU narrative until Doctor Strange, which is why Doctor Strange's prominent role in some of the early trailers for Infinity War has been taken as a signal to fans that time travel will be crucial to the film.

In Doctor Strange, the titular sorcerer gets his hands on an amulet known as the Eye of Agamotto. The amulet holds the Time Stone, one of the Infinity Stones Thanos is after in Infinity War, and allows the wearer to manipulate time. The magical object is not easy to use, nor is it meant to be used often. Messing with the space time continuum is always tricky and comes with an innumerable amount of risks. It's a last resort at best — one that Strange uses to keep Dormammu in a time loop until he gives up on destroying Earth. And if there's ever a time to use it again, it's definitely a battle against Thanos.

Granted, just because Doctor Strange is in Infinity War does not necessarily mean he will use the Time Stone. He appeared briefly in Thor: Ragnarok and there was no time travel in that film. However, on a recent interview with Good Morning America, Cumberbatch revealed that Doctor Strange would be at the center of Infinity War after admitting that he had read the entire script (something many of his co-stars have insisted they did not get to do). "I had to sort of understand what the context was," Cumberbatch said. "Strange has this wonderful role in it and I'm trying to find of hold the multiverse together, so I kind of needed to know what goes on in between."

Assuming Strange is crucial to Infinity War, it makes sense that the film would involve time travel. At this point in the MCU, Doctor Strange without time travel is almost like Thor without the power of thunder. Sure, both superheroes have other powers to keep them safe during a fight, but that's not what they're known for.

Doctor Strange's Eye of Agamotto aside, time travel could also be a bit less literal when it comes to Infinity War. As stated above, the MCU is heavy on flashbacks, and it just so happens that Tony Stark has created a technology that merges the two. "Certainly there is a five minute sequence in Civil War around a piece of technology that was laid in for a very specific reason, so if you go back and look at that film you may get a hint as to a direction," co-director Joe Russo told Josh Horowitz, via Collider. As Collider reported, it appears that Russo is talking about Tony's Binarily Augmented Retro-Framing, the tech that brought his last memory of his parents back to life in the opening of Civil War. It's possible that this device is used by the Avengers somehow in Infinity War, and will substitute actual time travel.

If time travel does not feature heavily in Infinity War, it could very well play a huge role in Avengers 4. Some fans have theorized that Infinity War will end in the destruction of the Avengers and Earth, leading Doctor Strange to use the Time Stone and go back in time, making Avengers 4 a sort of do-over movie. Others believe that the Time Stone could be used to bring in future characters, like the teen version of Ant-Man's daughter, Cassie Lang, who was recently announced as part of Avengers 4 on IMDB, according to The Mary Sue. In the current Ant-Man timeline, Cassie is still a little girl, so this casting news suggests either a massive time jump or some time travel shenanigans.

Adding in time travel to the MCU will only make the franchise more confusing, but, if it saves some of our favorite Avengers, then it's all worth it.