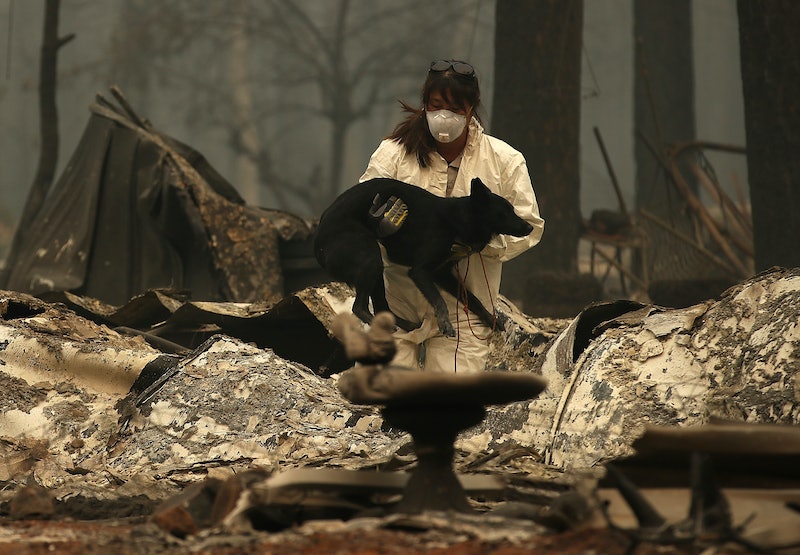 As many on the West Coast grapple with a devastating environmental disaster that began on Nov. 8, there is another group affected by the California wildfire: cats and dogs. The flames that began in Butte County, California, have reportedly displaced hundreds of pets in the affected areas. According to Mother Nature Network, North Valley Animal Disaster Group has already opened shelter for 1,365 displaced animals.

SFGate.com reported that the wildfires have burned a dizzying 151,373 acres of land, and destroyed 12,637 residences. Although local authorities have said that 70 percent of the wildfires have been contained — nearly two weeks after it started — it is unfortunately possible that domesticated animals, like cats and dogs, are still reeling from the horrific fire after their owners were unable to bring them along during evacuation.

Pets are especially vulnerable to the smoke that travels after a wildfire like that in California. As Preventive Vet's chief medical officer and veterinarian Jason Nicholas told The Oregonian in August, cats and dogs who already have respiratory issues are especially prone to develop weaker tracheas as a result of the smoke. Given their age, older pets as well as puppies and kittens are also more likely to be affected by air pollutants.

One way to spot an ailing breathing system in a dog or cat early on, according to The Oregonian, is to keep an ear open for any usual sounds made by your pet. If you hear your cat or dog coughing an unusual amount or producing a hoarse sound when they bark or meow, you should contact a veterinarian.

The American Veterinary Medical Association reported that the wildfires are also dangerous to cats and dogs' eyes. The flames and subsequent smoke can cause eye irritation as well as watering. These animals are also likely to develop excessive nasal discharge.

The association also stated that animals can develop inflamed throats as well as burning mouths as a result of the wildfires. Additionally, with a weakened cardiovascular system, pets can experience fatigue, exhaustion, and disorientation during their day-to-day activities. For instance, they may show difficulty in walking or playing while their appetites might tank.

But there are ways to help your furry friends. After a wildfire, veterinarians say that it is critical for pet owners to keep their dogs and cats inside their homes as much as possible. This cuts down on the likelihood of air pollutants affecting your pet's lungs.

On top of that, experts advise against extended physical activity for dogs and cats if there is smoke in the air. Plus, make sure that you have clean and fresh water for your pets nearby at all times as the risk of dehydration during or after a wildfire is often high.

And if you don't have a cat or dog but still want to help animals affected by the California wildfires, you can certainly do so by donating to organizations like the Butte Humane Society as well as the North Valley Animal Disaster Group. Both groups are seeking financial help to carry out surgeries, bring medicine, and other tasks to tend to wounded animals.