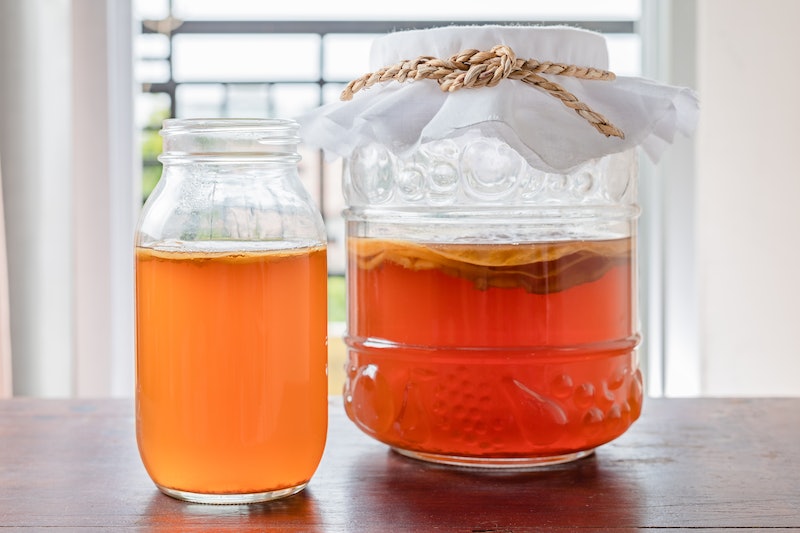 Hard cider and kombucha may feel like totally different beverages, but they're more alike than you think. Both are created from fermenting plants; hard cider is made of fermented cider apples, while kombucha forms when you ferment green, black, rooibos or herbal tea using a symbiotic culture of bacteria and yeast (SCOBY). Science has discovered that consuming fermented food and drinks might have beneficial effects on our gut health, but experts tell Bustle that what sort of fermented product you choose to drink does appear to matter — and that hard cider and kombucha can have quite different impacts.

The main impact you're likely looking for is different effects on gut health. The health of your gut depends a lot on its microbiome, the combination of bacteria and other microbes that live in the gut and help with digestion and other essential functions. "The larger the variety of bacteria in your gut, the more your system is optimized for good health," gastroenterologist Dr. Niket Sonpal M.D. tells Bustle. "People who have imbalances of gut bacteria, where one strain is overwhelmingly present over others, can begin to feel less healthy." Kombucha has a reputation for helping gut balance, though more research is needed to determine those effects. Hard cider may not be so helpful — in large part because of its alcohol content.

Kombucha isn't definitively alcohol-free; because it's a fermented product, many varieties contain a small amount, and hard kombucha with higher alcohol content is easily available. However, hard cider is always alcoholic, and that means it can have quite a different effect on your gut than non-alcoholic fermented drinks. Dr. Will Bulsiewicz M.D., a gastroenterologist, tells Bustle that while a lot of kombucha has around 0.5% alcohol, many hard ciders are in the range of 4.5 to 10%.

Along with the obvious side effects of consuming higher-alcohol beverages, hard cider's alcohol content can also affect your gut. "Alcohol consumption has been shown to negatively impact our gut microbiome, leading to a decrease in beneficial microflora," Dr. Mahmoud Ghannoum Ph.D. of Case Western University tells Bustle. That decrease can have knock-on effects; alcohol can stress your gut, making it more inflamed and vulnerable to infection.

The microbial mixes in kombucha and hard cider are also different. Dr. Bulsiewicz tells Bustle this is because they're fermented in different ways. Kombucha contains both bacteria and yeast, while hard cider has microbes related to yeast, fermented apples, and fungi, according to a study of ciders published in Microorganisms in 2017. "There are no direct comparisons to say which of these mixes of microbes is better for human health," Dr. Bulsiewicz says. Scientists are still uncovering how microbes in fermented products might affect the gut, so it's difficult to make a judgement on the microbes of each drink and how they might affect you.

Their acids differ, too. "In addition to the microbial strains, kombucha contains a number of acids such as acetic acid, gluconic acid and lactic acid, as well as some antibiotic substances," Dr. Ghannoum tells Bustle. These acids might be part of why kombucha is thought to be good for the gut. In particular, Dr. Ghannoum says, kombucha's acids might stimulate the immune system and help ward off certain diseases. However, more work needs to be done in human studies to confirm this link. Hard cider has its own array of acids, mostly malic acid that's transformed into lactic acid during fermentation. Malic acid is the compound that makes hard cider taste sour, and it's not clear what effect it has on human health. Hard cider also contains pectin, which has been shown to have some possible benefits for the gut microbiome by boosting populations of bacteria. Side-by-side comparison, though, is tricky because the gut is a very complicated place.

The two beverages are also similar in a lot of ways. You may have heard that kombucha is rich in polyphenols, a kind of antioxidant that's particularly common in plant-based foods and drinks, but Dr. Bulsiewicz tells Bustle that hard cider has them too. "Both beverages contain antioxidant compounds to reduce oxidative stress in the body, in relatively similar amounts," he says. Reductions in oxidative stress have a lot of health impacts, according to research published in Frontiers in Pharmacology in 2018, including helping your immune system, slowing the aging of your organs, and lowering your risk of developing age-related illnesses. Both kombucha and hard cider also contain vitamin C, which helps maintain healthy cells and ensuring that the immune system functions properly.

If you're looking to improve your gut health, experts tell Bustle, kombucha is a better option than hard cider purely because of its lower alcohol content. "Reducing alcohol consumption will go a long way to restore your microbiome balance and associated gastrointestinal symptoms," Dr. Ghannoum tells Bustle. The alcohol in hard cider might undo many of the positive effects it can have on your digestive health. Still, a bottle of one or the other isn't going to make an enormous difference, so enjoy either or both responsibly.

More like this
An Expert Weighs In On The Viral Raw Carrot Salad Trend
By Alexis Morillo
Do Green Powders Work As Well As TikTok Says They Do?
By Carolyn Steber
How Ovulation Affects Your Sense Of Smell, Libido, & More
By JR Thorpe and Lexi Inks
12 Aphrodisiac Desserts To Spice Up Your Valentine’s Day
By Kaitlyn Wylde
Get Even More From Bustle — Sign Up For The Newsletter
From hair trends to relationship advice, our daily newsletter has everything you need to sound like a person who’s on TikTok, even if you aren’t.