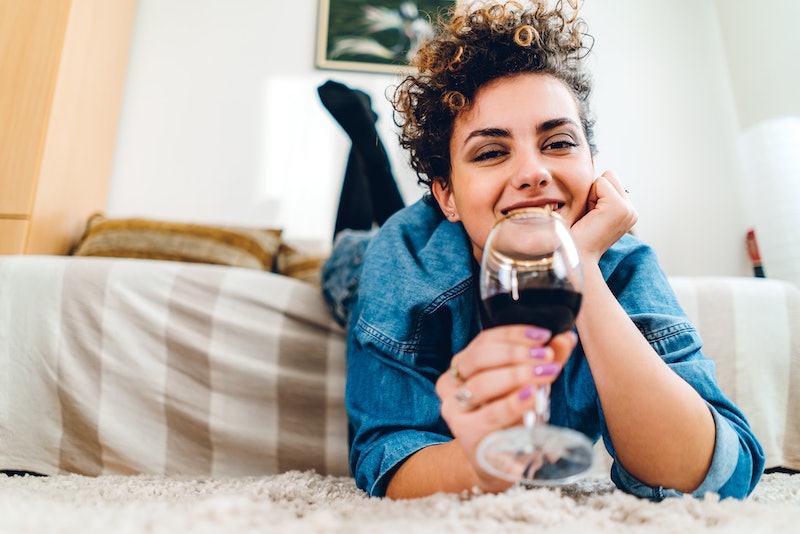 There are a lot of perceived benefits to being a red wine enthusiast. Beyond sounding fancy at dinner parties by referencing obscure areas in France, people often brag about the apparent health benefits of drinking that delicious glass of Cabernet. Unfortunately, the science isn't as concrete as you might think. Although many scientists have studied what happens to your body when you drink red wine, there isn't a definitive causal link between drinking red wine and being healthier.

According to the Mayo Clinic, red wine is believed to be a "heart healthy" drink because it contains antioxidants called "polyphenols." It says that one polyphenol in particular, "resveratrol," could help prevent damage to blood vessels and keep their lining protected. Resveratrol comes from the skins of grapes, which is why it's present in a higher concentration in red wine than white wine. Winemakers leave the grape skins in red wine for a much longer time than they do with white.

Dr. Martha Gulati, MD, MS, FACC, FAHA, the editor-in-chief of CardioSmart, a patient engagement initiative for the American College of Cardiology, points out that some people think red wine is responsible for something called the "French paradox." The phenomenon refers to what seems like a contradiction: people in France tend to have lower rates of heart disease in spite of having diets high in saturated fats.

Partially thanks to the French Paradox, resveratrol and red wine have gotten a "lot of good press," Dr. Gulati says. But as Harvard Health notes, there are many experts who believe the French Paradox can be explained by many other factors having nothing to do with red wine, like lifestyle differences, or the underreporting of heart disease prevalence by French doctors.

This disagreement over whether red wine plays a clear role in the French Paradox is a symbol for the greater conversation over red wine and health in general. There are many studies that show a correlation between red wine and improved heart health, but as of May 2019, there's no study that proves a direct cause-and-effect link between the two, as noted by the American Heart Association.

Another important variable to keep in mind is the quantity of wine consumed in any given study. The general consensus among heart associations and experts like Dr. Gulati is that any potential benefits of drinking red wine can be achieved through a moderate approach to drinking, only. "Nothing in excess is good," Dr. Gulati says. "We recommend one glass or less for women [per day], two or less for men." But again, there is no universal consensus about the right amount of alcohol to drink each day, week, or month — and there are also studies that argue even moderate drinking is worse for your health than not drinking at all.

For example, a 2015 study published in The Annals of Medicine studied the health effects people sustained over a time period in which they drank red wine regularly and "moderately". Specifically, a portion of people in the study drank one glass of wine daily, at the largest meal of the day. The study showed that this drinking habit was correlated with improvements of cholesterol health, better sleep quality, and decreased risks of damage to heart and blood vessels, too. The study in question was for a specific group of people, namely those with controlled type-2 diabetes and a low risk for alcohol abuse.

In contrast, a cumulative study of alcohol use in 195 countries and territories funded by the Bill & Melinda Gates Foundation, and published in The Lancet, concluded by arguing that the "safest level of drinking is none." The paper was controversial, for the same reason that many studies on drinking are controversial, as noted by Vox: many of the conclusions seemed to assume a causal relationship between drinking and health, when those relationships are almost always correlative at best.

The bottom line is that there isn't one answer or guarantee for how red wine, or any type of alcohol, will impact your health. "If you don’t drink or don’t like alcohol, don’t drink it," Dr. Gulati suggests. "But if you like alcohol, have it and keep in mind the recommendations to not consume excessively."