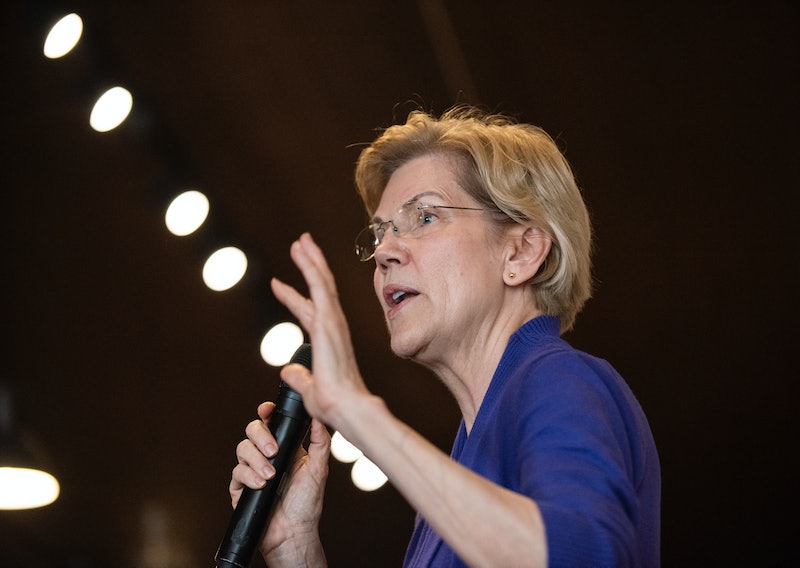 Looking back at the federal response to the HIV/AIDS epidemic in 1990 as a model, one presidential candidate has proposed a policy to help fight the opioid epidemic. As detailed in a Medium post Wednesday, Sen. Elizabeth Warren released her policy to combat the opioid crisis, USA Today reported. Warren will introduce the policy as a bill in the Senate known as the CARE Act, and if it becomes law, it would provide $100 billion to fight the epidemic, she wrote on Medium. Experts tell Bustle it's the "first of the really comprehensive approaches" to the crisis.

In her piece, Warren focused in part on the impact that the opioid crisis has had nationally. Citing data from the CDC, she explained that the country's life expectancy is decreasing and 70,000 people died of a drug overdose in 2017, the majority of those from opioids. But she also explored the crisis' effect in cities, particularly in the black community. She noted that West Virginia, the state with the highest rate of residents dying from opioid-related deaths, saw 833 people die in 2017. But the city of Baltimore alone saw 692 that same year, Warren wrote.

Warren, in the Medium post, wrote that she modeled the CARE Act after the Ryan White CARE Act, which for the first time provided for a federal response to the HIV/AIDS epidemic, an issue largely left unaddressed by the federal government in the 1980s. Like the Ryan White CARE Act, Warren's plan for fighting the opioid epidemic, she says, would funnel money for prevention, treatment, and recovery services to first responders, public health departments, and other community agencies already fighting this crisis.

Dr. Nancy Nielsen, senior associate dean for health policy in the Jacobs School of Medicine and Biomedical Sciences at the University of Buffalo, tells Bustle that the similarity to the Ryan White CARE Act is key, both in the scope and because of the way that the money would be distributed, including to localities and nonprofits.

"If you try and get money into people on the front lines doing the work — as long as those are evidenced-based approaches — that can be very effective," Nielsen, who calls this plan one of the most "comprehensive" so far, says.

Warren wrote that the money would come to $10 billion per year for the next 10 years and would be split among states, territories, and tribal governments; the hardest hit counties and cities; and nonprofits providing services, which Nielsen stresses is so important. More money would also fund research, training, and wider access to the overdose reversal drug naloxone, Warren added.

Dr. Erin Bonar, an assistant professor at the University of Michigan Addiction Center in the Department of Psychiatry, tells Bustle that the 10-year funding outlay is important because it will allow for establishing and maintaining infrastructure to fight the crisis — not just working on a year-at-a-time basis.

Bonar also says that the inclusion of wrap-around services — including housing services and transportation — is important. "Hitting all aspects of people’s lives is very important to being able to get people the tools to successfully live their lives without having an opioid addiction," Bonar says.

Exactly what those services look like could vary drastically from community to community, Bonar adds, touching on the criticism that the opioid crisis has only received attention since white Americans started overdosing in high numbers. For example, she says the resources that might need to be made available in Baltimore may differ from those in West Virginia. Public transportation is one example; there aren't many buses in rural America, she points out.

Warren submitted another version of the bill — together with her House partner, Rep. Elijah Cummings of Baltimore — in 2018. Her new policy is an updated version, and the two will introduce it with some minor changes in the next months, Vox reported. Up until now, not many had signed on to the bill; there were no Senate co-sponsors, according to Govtrack, and only 81 in the House.

To pay for her plan, Warren once again pointed to her tax on "ultra millionaires." She criticized some rich families including the owners of Purdue Pharma, the Sackler family, for having "made their money pushing OxyContin." Bustle reached out to the Sacklers through Purdue Pharma for comment.

Nielsen says that its funding plan will be the difficult part in passing the CARE Act, but stressed the money that would be spent on this plan pales in comparison to what the crisis costs society.

And ultimately, she says, it might be the changing views on the crisis — and decreasing stigma for those fighting addiction — that build public pressure for action. "The truth is, members of Congress, like members of the public — no matter what their political affiliation — everybody knows somebody or knows a family who has been affected by this epidemic," she says.

Nielsen stresses that opioid addiction is not a moral failing. "That just isn’t true," she adds, calling it a "chronic, treatable, relapsing" disease. "Every one of those words is important," she continues. "It's chronic, it does have relapses — no question — but it's absolutely treatable."

Whether the bill moves forward before 2020 remains anyone's guess. The focus brought by Warren, though, can't hurt.