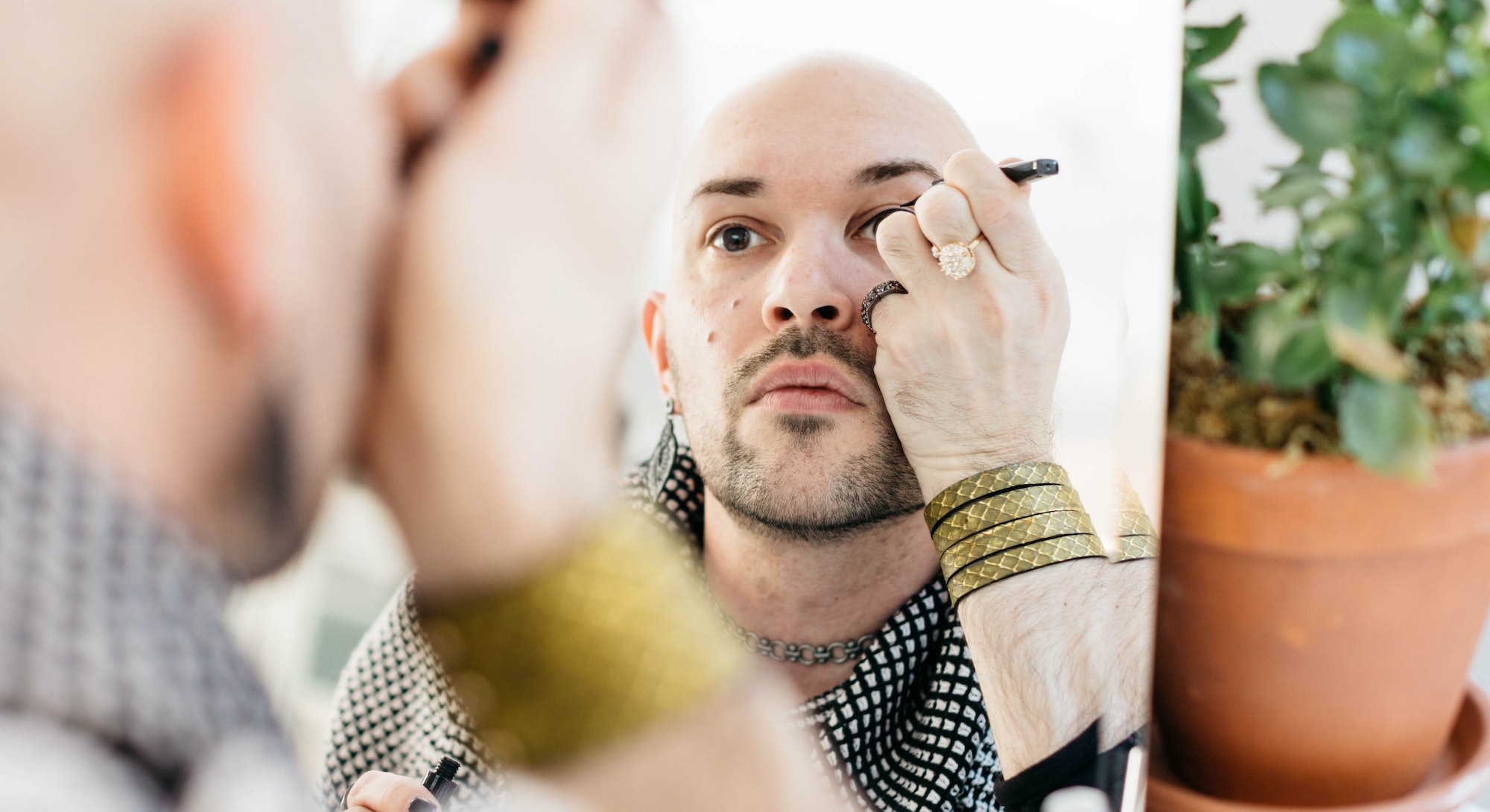 Somebody once asked me, “What does wearing eyeliner have to do with being a woman?” It wasn’t meant as a challenge — she seemed genuinely curious about what it means that I identify as a trans woman, and what that has to do with beauty products.

I still experienced it as a challenge, though. This is partly because people like me are often accused of cherry-picking the fun parts of womanhood while continuing to enjoy male privilege. And it’s partly because I’m expected to answer questions like this daily.

But as questions go, it’s not a bad one. What does wearing eyeliner have to do with being a woman?

Nothing, on the face of it. We associate makeup with femininity, but this is a perfectly subjective cultural value. We also associate femininity with womanhood, though those concepts are complex, their connection wobbly. A cisgender woman who doesn’t wear makeup is still every bit a woman. A trans woman who passes for cis or is mistaken for a man is still every bit a woman, regardless of how much makeup she wears.

And yet, in my case, wearing eyeliner has a lot to do with being a woman. That's because my sense of my own beauty — which means creating a look that incorporates makeup, women's clothing, and jewelry, taken together with the way I speak and carry my body — led me to notice how important my gender is to me. And, because I’m miles from cis-passing, this subjectively feminine presentation is how others see me for who I am.

I was publicly genderqueer in high school. Not that I had the language to call it that at the time — this was the early '90s, and there was no internet to lean on for information on gender identity. I didn’t know what to call myself, and conflated my gender, femininity, and all-around queerness with the term “bisexual.” But while the words might have been muddy, I knew that I could make my identity clearer to the outside world by adding a little makeup.

My first eyeliner was a smudgy, twist-up affair bought at my local Thrift Drug when I was fourteen. Every morning before school, I drew thick lines under my lower lids, ending in little wings that shot straight out from the corners. I can still feel the way it skidded on my skin, leaving perforations in the line that I would go back and fill in. Sometimes, I’d wear loud, red lipstick, too, though I soon gravitated towards purples and plums. Then, dressed in flowing, vintage tops scored cheap from thrift shops, I’d dart to the bus stop before my parents came downstairs. I preferred to avoid the conversations we had about my appearance, which they saw as a provocation.

And it was, in a way. Two things happened when I was out in the world with my makeup on. The first was that my people could recognize me. For the next few years, I found friends and lovers without hesitation, since other queers found me perfectly legible.

The second was that my safety was compromised. In my high school, “faggot” served as a summary of all the ways I transgressed in the eyes of my peers. And my punishment, enacted daily, was a collective attempt by my classmates to ostracize me socially and threaten me physically.

The threats were successful. I couldn’t walk through the halls without being knocked down. But casting me out wasn’t so easy. I’d found people like me, and we learned to fight together. Sometimes we offered our classmates seminars on homophobia. When our timing was right, we could defend each other physically. More often, though, we just commiserated.

My politics and my eyeliner became inseparable. Projecting my own sense of beauty, without shame or hesitation, scared the hell out of my opponents. My look was my armor and my weaponry.

But the fight took its toll. Somewhere in my late teens, I closeted myself again, without particularly noticing that I was doing so. I stopped wearing anything that scanned as feminine. I didn't even own eyeliner for 20 years. And I said nothing when people took me for a straight, cisgender man.

In those long, lonely years of silence, did I think about wearing makeup? I tried not to. But I failed, every day.

I’ve finally recognized, over years of trial and error — mostly error — that a wildly disproportionate amount of anxiety I experience arises from dressing like a man. A couple of years ago, that anxiety was swallowing me whole. I didn’t like who I’d become, and I wanted better for myself and my family. And, thanks to the wealth of information available online, and the supportive trans and queer community I found there, I had finally found the words to describe myself.

I knew what I was missing: the freedom and preparedness of feeling pretty —feeling like me.

So I dove back in. I gave myself permission to do my makeup, and to throw out all my boy clothes. I came out as genderqueer, and then, as I got comfortable with myself again, I began to publicly identify as a non-binary trans woman.

These days, I wake up early, a little before my partner and child, to make time for myself before the whirlwind begins. A good day starts with affirmation, with definition, and with liquid eyeliner. My technique has evolved, during the past year, from shapes drawn in prayer and panic to a steady, reliable routine. If I’m feeling fancy, or in need of a little extra confidence, I curl my lashes and add mascara, then a little eyebrow pencil and lines of liquid glitter. Finally, I anoint myself with a berry-colored lip stain, and I’m ready for the world.

Every day, my personal power has grown. Strength and security come from drawing lines on my lids, and from the visibility that follows.

There is still danger in wearing makeup and heels out in public. Not that it’s as bad as it could be, here in Massachusetts. I make my living as a DJ, and I’m shielded a bit from that life on stage. I don't ask my clients to use my female pronouns, and they're generally happy to accept the way I look. On a purely superficial level, my sense of beauty can be read as eccentricity.

But I long for more. My partner, my daughter, and my close friends all use my pronouns — I’m she/her, please and thank you — but there aren’t many others who’ve followed along. Comments follow me, from strangers and people I’ve known for years, about how my pronouns and presentation make them feel. And I’m often given summaries of conversations that take place in my absence: whether I’m a cross-dresser; if I’m secretly a gay man; what the “arrangement” is between me and my partner, a cisgender woman; why anyone with a body like mine, who is taking no steps to pass as cis, would want to be treated like a woman.

Other issues feel more pressing. I loathe using public men’s rooms, but am terrified of using public women’s rooms. I fear hate crimes, particularly when I travel. I have been groped, catcalled, told to kill myself online, insulted from the windows of passing cars. Legislation looms over my existence.

Most, if not all, of these problems would disappear if I took two steps: I could stop dressing the way that I do, and I could stop asking for my pronouns to be used. I could, in other words, return to the closet. Well-meaning friends have recommended this to me as a way to stay safe. But my long exile from beauty taught me that this safety is a sham.

So long as I look at my gender and my sense of my own beauty as my problems — things I need to deal with, things I might hide — I am threatened from within. I slip into seeing myself, as so many see me, as a delusional person making unreasonable demands. And that’s a road that leads, at best, to self-loathing. At worst, it leads to suicide. A glance at the statistics tells us as much.

But when I recognize that my beauty, my femininity, and my sense of myself as a woman are among my greatest strengths, it becomes clear that all of these are cultural problems. The moment I see them outside myself, I can put on my big girl panties, do my makeup, and tell the people around me that I expect and deserve their help and protection.

So I trade the threat of inward violence for that of violence from without. And yes, that scares me, as it scared my parents all those years ago. But I prefer it this way, because these problems can be solved, if we work together.

My sense of myself is personal, particular, idiosyncratic. It involves massive, complex issues of identity and politics. It involves communities that nurture me and those that would love to crush me. And all of this is present when I’m leaning into the mirror, getting my eyeliner wings just right.

That’s a lot to pack into a tiny felt tip. But such is life when you’re both flaunting who you are and wishing, fervently, that it was a non-issue.

Women, on the whole, aren’t defined by eyeliner.

But for reasons beyond her control, this one is.