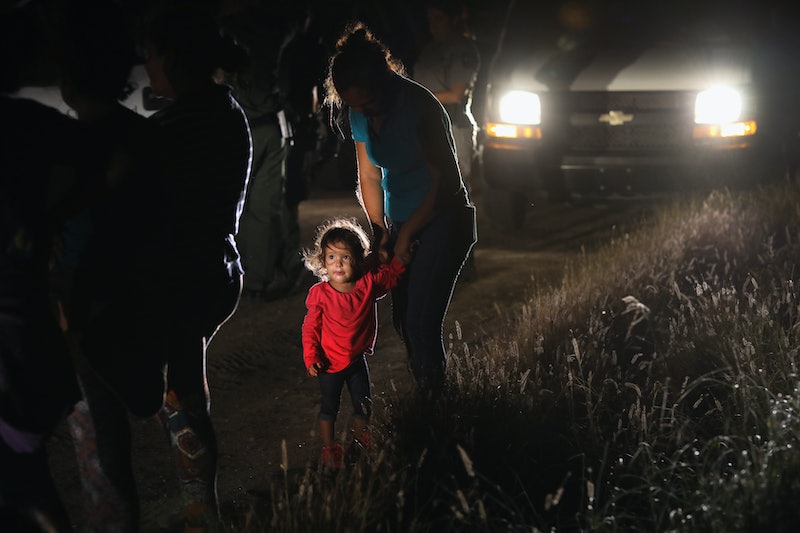 President Trump's policy of separating immigrant children from their families at the border drew international condemnation, and a new study on the mental health of immigrant kids in detention centers helped shed light on exactly how family separation affects a child. Bustle spoke with Dr. Craig Katz, who co-authored the study, and he said that family separation can have an "incredible emotional effect" on children — and that detention centers should have more mental health services available to address it.

In the study Mental health of children held at a United States Detention Center, which was published in the upcoming issue of Social Science & Medicine, Katz and his fellow researchers examined the mental and emotional health of immigrant children who'd been detained in 2018. They found that on average, children at the detention centers had more emotional and behavioral difficulties as the U.S. population at large, and higher rates of post-traumatic stress disorder.

"If you take any child suddenly away from their parents, it has an incredible emotional impact on them, whether they're new immigrants or not," Katz tells Bustle. "If you take a child away from their parents in a completely new environment, where they have never been before, where they probably don't speak the language, and they're already feeling pretty lost and disoriented, and you take away the most stabilizing factor in their life — their parent, their mother — that's like a double- or triple-whammy."

In total, 44 percent of all detained children showed at least one behavioral or emotional concern, the study found. Katz points out, however, that detention itself isn't necessarily the cause of the mental health issues that some immigrant children exhibited. He noted that many of the immigrants his team interviewed had come to the U.S. to flee persecution and violence they were experiencing in their home countries.

"These are kids who are probably exposed, directly or indirectly, to many losses in their home country, probably violent losses, traumatic losses," Katz says. "So child separation lands on a population that is already very vulnerable, and may already have the underlying mental health issues that we identified in the rest of the population of the detention center. And then you do something that just pours pounds of salt into an open wound."

To make matters worse, Katz tells Bustle that the detention center he and his team observed didn't appear to have any mental health services available to detainees. This, he says, "adds to the inhumanity of detention."

There is dispute over the extent to which immigrant detention centers offer mental health services. On its website, Immigrations and Customs Enforcement says that it does provide "mental health care" to immigrants at its detention centers. However, federal inspectors have cited ICE facilities in the past for offering insufficient mental health treatment, and in 2018, the Trump administration argued in court that it doesn't have "any statutory or constitutional duty" to provide mental health care to detained immigrants. In their study, the researchers wrote that "further clarification from ICE is required regarding the nature of available treatment."

"If there's a concern about what impact immigrants will have on our country, if you want to start them off on the right footing, you should be addressing their mental health needs as early as possible," Katz tells Bustle. "If you want them to blend into society and be contributors, and if you also want to be compassionate and humane, these are services that should be made available to them straight away."

Although the Trump administration stopped separating children from their families in June 2018, the legal battle over family separation is far from over: On Friday, Cmdr. Jonathan White of the U.S. Public Health Service Commissioned Corps testified in court that his office has identified 1,712 cases of possible separation. However, the government said in April that it may need up to six more months to identify all of the separated families.