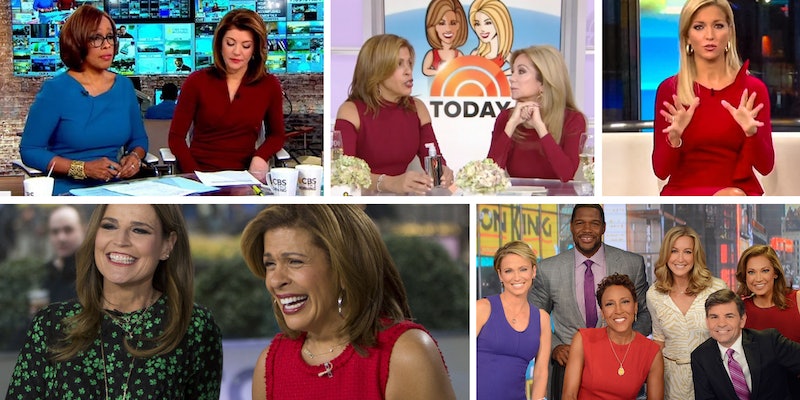 For any up-and-coming journalist, there is one clear indicator that her career has reached the next level: Regular television appearances. Whether it’s as an anchor, a correspondent, or a contributor, regular exposure to a television audience is a significant step to a more highly-visible platform. And while skill, talent, brains, and drive are the main traits driving the success of women in the industry, it still really matters what those women look like on TV (these are women we’re talking about, after all). Unlike their male counterparts — guys can throw on a suit, get a few blots of makeup on their forehead, and be considered “camera-ready” — women who regularly appear on television news have to spend a significant amount of time, energy, and money on their appearance in order to do the same job.

Karyn Starr is a personal stylist and co-founder of White-Starr who has worked periodically with ABC for about 8 years dressing hosts and anchors on shows like Good Morning America. As she tells Bustle, “Women in this industry are definitely a very specific type. You need more energy than the average person to do this job.” Starr points out that most morning show hosts are getting their hair and makeup done at 3 or 4 a.m. to be ready for the morning news. Many of them are mothers, with kids (and even sometimes newborns) at home.

When Starr is styling on-air talent, she keeps one goal in mind: “I want the women I’m dressing to look like themselves.” But, in the harsh world of TV news, looking like oneself often doesn’t always translate well on camera. “The lights are much harsher than anywhere else, and the angles can be tricky,” says Starr. (Sitting cross-legged on a stool with a camera coming at you from the side? No thanks.)

National Politics Correspondent for Newsweek Media Group Nina Burleigh learned early in her career what happens if you don’t know the unspoken rules of how women should look when appearing on television. “I’d written a magazine article about a man involved in a very bloody and awful crime story, and a local station wanted me on,” recalls Burleigh of her first time on-air. “I went down in whatever I was wearing. And when I watched the taped segment later, I only could think, ‘Oh my god. My hair looked like that?’ I just looked like...like a slovenly person.”

“If you don’t dress the part, you look like the person they picked up on B-Roll or like the sobbing witness at a crime scene.”

Now, as someone who makes regular TV appearances to discuss her reported pieces, Burleigh’s feelings about spending time in hair and makeup before a TV appearance are mixed. “I’ve gotten used to what they do,” she says of the camera-ready routine. “But one morning, I was sitting there with curlers in my hair and I’m thinking, ‘They’ve just spent 25 minutes getting my hair and face ready for something I will get to discuss for maybe three minutes?’ It’s ridiculous.”

The alternative, however, isn’t so appealing either. “If you don’t do that to yourself, then you look — by orders of magnitude — worse,” says Burleigh. “If you don’t dress the part, you look like the person they picked up on B-Roll or like the sobbing witness at a crime scene.”

CNN Entertainment Reporter Chloe Melas, who often appears on the network as a correspondent and contributor, tells Bustle that no boss has ever told her what to wear or how her hair and makeup should be done, but she does spend about 45 minutes in hair and makeup in the morning and follows the early career advice gleaned from peers about wearing jewel tones. “They look good on like literally everyone,” she says.

It helps that Melas also just loves makeup, and shows up fresh-faced every morning, ready for the full treatment. “The Chloe you see on TV is not the Chloe that took a train and two subways to get to work and is raising a one-year-old,” says Melas. Still, her main focus when choosing her wardrobe and makeup is not to look glamorous or traditionally beautiful, but to look and feel professional. “I dress like I am going to have dinner with my grandmother. I wouldn’t show up in ripped jeans. It’s not respectful to the viewer.”

Commanding trust and authority is one reason this beauty standard exists. (Once again, while men have “the suit” — which immediately indicates power and importance — a woman needs to be more selective when trying to convince viewers she is a “trusted” source or authority on a subject.)

“The way you normally look is forbidden on television.”

“These women are people, they are not models,” Starr says of her TV news clients. “Yes, they look great and take amazing care of themselves, but they go into the business to be journalists, not actresses.”

Melas agrees. “When I’ve spent months trying to break a story, and reporting on something, I don’t want what I look like to be the focus,” she says. “I want the viewer to focus on my story.”

This is the crux of why women on TV can not easily be freed from the “uniform” of jewel tones and false eyelashes and blow outs. Being a female television news fixture in a deeply misogynistic culture means that, in order to ensure the focus is not on how she looks, a woman on TV needs to spend a ton of time, effort, and money on how she looks. The standard “TV uniform” exists, in a way, for the purpose of being unseen.

“The way you normally look is forbidden on television,” says Burleigh. “You better have makeup on or you look like you don’t belong there.”

And for women of color in television, the challenges go far beyond makeup and shift dresses. The white and eurocentric beauty norms which plague our society ensure that non-white women on-air face more scrutiny than their fair-skinned counterparts.

She’s now a Congressional Correspondent for NY1/Spectrum News in Washington D.C., but before that, Eva McKend spent three years as the only black, female, on-air news anchor in Burlington, Vermont. “I had been wearing wigs and weaves,” she tells Bustle of her hair style choice when she started the role. “And about two years into the job, I felt like I needed to be free.” McKend made the decision to go on-camera with her natural hair. The response was overwhelming. “It was, like, a really big thing,” she says.

"So few women of color feel there is a space to be their authentic selves on television. It’s still a predominately white industry.”

McKend recalls being the only black woman on television in three stations in the market, and, therefore, becoming a pretty recognizable face. “It turned into a whole big thing,” she says. “Some people were really excited about it...and some people weren’t. I was told it didn't look professional and it looked messy. I had one white woman tell me I couldn’t be a role model for her bi-racial child.”

Ultimately, McKend transitioned to another on-air style, and now wears her hair in braids and twist, which she feels, “honors blackness and honors my identity.” It also allows her the freedom to do her job, which includes rushing around the capital and, at times, setting up her own camera for broadcasts. “It’s a shame that it became such a big thing,” McKend says of the response to her personal style choice. “But it was noticeable, mainly because so few women of color feel there is a space to be their authentic selves on television. It’s still a predominately white industry.”

Being a TV news viewer who criticizes female anchors’ appearances also seems to be a hobby taken up predominantly by white people. “White women are so judgemental and harsh,” Starr concludes. “It’s a problem in the universe. It’s women who are judgemental of other women and who care about what they wear. I don’t really think it’s men judging them as much.”

The standard of looking polished to exude authority and to be “camera-ready” to blend in is firmly in place — though most people interviewed for this article, including McKend, do think the industry is progressing (if painfully slowly) when it comes to its collective approach to style and beauty standards for women.

“There is so much time spent on appearance and it certainly is a factor,” McKend says. “But I really feel like talent is prized. I see more and more darker-skinned women and women who do not fit traditional, eurocentric beauty ideals being elevated across the country. And that gives me a lot of hope.”

Melas says she often hears reporters in the hair and makeup chairs push back if they are uncomfortable. “I personally feel as though there has been an evolution in a progressive, positive, direction when it comes to the way women look on television," says Melas.

“For bigger shows, the talent team is part of a huge franchise. They represent aspirational qualities that women at home look up to."

In fact, Burleigh may be one of the women Melas is referring to. “For years, I would just go in the [hair and makeup] room, and be their dolly,” she says. “I never said anything. And then it dawned on me that I can actually say, ‘No.’ I can say, ‘I don’t want that gross, sticky lip gloss on my mouth. Don't ever put that on me. And don’t plaster pancake makeup on my skin.’ I’ve started to take control of it.”

In recent years, anchors have also been given room to dress “a little more cool and more modern” say Starr. Instead of wearing clothes that were prescribed, on-air talent have been selecting wardrobes more in line with what a New York City woman might wear if she “had to get a little more dressed up for work,” says Starr. (More than one person interviewed for this piece gave a nod to CNN's Brooke Baldwin for moving the needle when it comes to style.)

For top talent — those household names — the image they project goes beyond their individual preferences. “For bigger shows, the talent team is part of a huge franchise,” says New York based celebrity style expert Francesco Bilotto. “They represent aspirational qualities that women at home look up to. They look like women who have it all.” (Plus, Bilotto points out, it’s not the worst thing in the world to get your hair and makeup done every day and have someone choose your clothes.) “The change isn’t happening quickly but it is evolving.”

It’s certainly frustrating to know we may not see many makeup-free faces or a sea of flats or tons of non-white women rocking their natural hair on television any time soon. But still, the industry is allowing for more personalization and individualization in style choices. It’s a small step in the long journey towards allowing women on TV (and perhaps everywhere in life?) to exist in public just as we are.

More like this
How This Founder Inspired A New Wave Of Drinking
By Jordan Murray
Jiu Jitsu Champ Kim Blake Is Pushing For More Women In The Sport
By Kathleen Ferraro
What The Lionesses’ Win Really Means For The Future Of Football
By Angelina Kelly
It’s Official: 'The Bachelorette' Is No Longer A Fairy Tale
By Samantha Allen
Get Even More From Bustle — Sign Up For The Newsletter