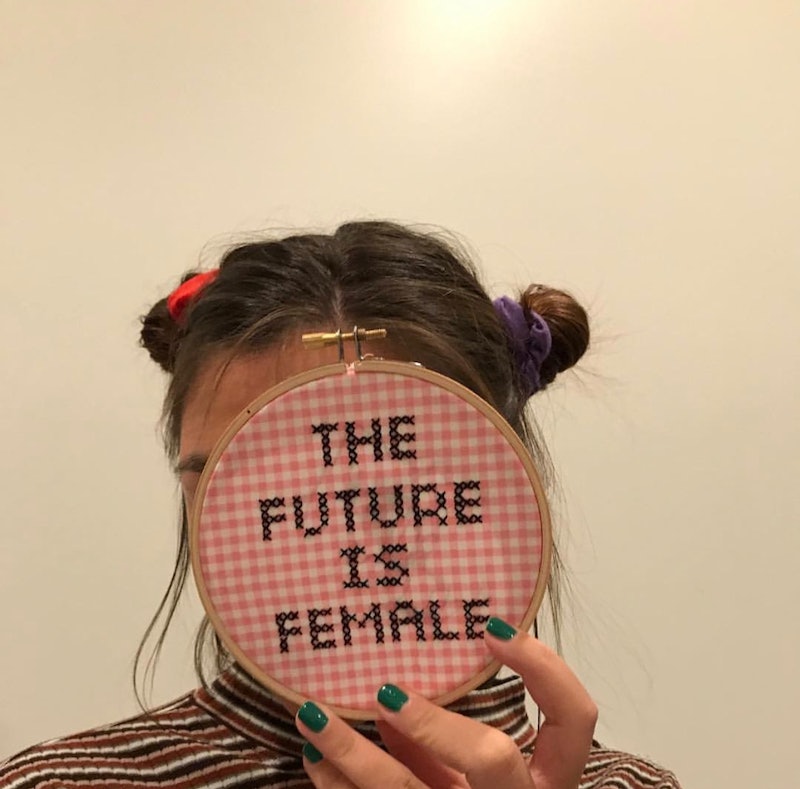 It was the winter of 2016, and Shannon Downey and thousands of women like her were mad. Donald Trump had just pulled off a surprise win, beating out Hillary Clinton, who was, in all estimations, going to be the first female president, and there was a lot to be angry about. These women were so upset, in fact, that most nights they sat on their couches and stabbed an inanimate object, over and over and over again.

Meet the stitch n’ bitchers of the modern era.

No longer the territory of the prim ladies of yesteryear showing off their neat stitches in cutesy samplers, the modern Etsy generation has taken up the craft of cross stitching to relieve stress and channel their rage. It’s an act of self-care that doubles as an act of resistance.

In January, Downey, the 39-year-old Chicago resident behind the site Badass Cross-Stitch, got more than 20,000 likes and 8,000 retweets on a photo of her Women’s March protest "sign." The large-scale embroidery included a hoop holding fabric that was hand-stitched to read, "I'm so angry I stitched this just so I could stab something 3,000 times" alongside a triumphant resistance fist proudly clutching a needle thread.

"I use stitching to process, and there is so much to process [in politics]," Downey, who teaches at DePaul and Columbia and works for the Chicago chapter of Asian Americans Advancing Justice, tells Bustle.

Downey says she learned the skill of cross-stitching around 5th grade and picked it up again a few years ago. "I started doing sort of subversive embroidery when I was on a computer all the time. I was always attached to a device and hating it." She bought a Star Trek-themed pattern off Etsy and her offline hobby quickly became a passion: "I was like, 'oh, this is totally the answer to what's happening in my world right now.'"

She got creative, coming up with her own patterns for cross-stitch and embroidery and sharing them first on Instagram and Tumblr, then on a dedicated website with patterns people could download and print out for their own use. Her hope was to encourage others to pick up the analog activity and take a break from screens (she said the irony of building this community online is not lost on her). At first her designs were pop culture-related patterns, witty feminist zingers and occasionally social justice-oriented statements. But come 2016, the content of her patterns pivoted dramatically.

Downey, who describes her political views as "take a left and keep going," explains that her site "took a political turn and now it's sort of exclusively politics, feminism, and social justice because that's really all that's on my mind." Her recent work includes the colorful "Boys will be boys held accountable for their fucking actions" projects you may have seen slide through your Instagram, or variations on odes to Maxine Waters' "reclaiming my time" and the scold-turned-rallying cry of "nevertheless, she persisted." Downey takes what is happening in politics, and freezes it in time through cross-stitch.

April Rueb, a 28-year-old New Yorker, was also upset by the election, but felt like what little action she could take wasn’t meaningful enough. Until recently, she worked in media and couldn't openly attend protests. Rueb and her friend Samantha Zabell, a hand letterer, came up with a plan to give back. The duo solicited ideas for social justice-themed crafts that they then "sold" via Instagram account Craft for Change. The price for each craft was proof of donation to a specified charity. For example, to claim the cross-stitch homage to Supreme Court Justice Ruth Bader Ginsberg's iconic collar with the word "Dissent" stitched in the center, the buyer needed to forward their receipt of a $40 donation to the ACLU.

"With the Muslim ban I ... was so frustrated by what was happening and wanted to do something," Rueb said. She came up with a way to express her opinions and get monetary help to worthy causes. "Even though I was short on time, I was able to stitch something pretty quickly and sell it on Craft for Change. I can make this at midnight and yeah, there's not a protest going on at midnight, but I can make this at home on my couch and contribute."

By Rueb's count, the pair has raised $2,075 for various charities,

While she finds in-person protests to be overwhelming and hard to make it to (she's been preparing for an intensive education course that will begin soon), Rueb is proud of the activist contributions she's made through the project. Not only has she been able to orchestrate donations, she said, but she has enabled others to feel creative.

"We've had people who've said, 'I can't donate to any cause right now but I can contribute, I can give you artwork,'" she said.

The barrier to entry for cross-stitch is low. Given a simple tutorial and access to a few cheap materials (wooden hoop, embroidery floss, fabric, needle), a determined would-be crafter can be up and running in around 10 minutes. That, combined with the high level of cute and Instagram-worthy potential — sub a “if you sprinkle when you tinkle" bathroom reminder with a fierce Beyoncé lyric — and you’ve got catnip for young women eager to find ways to express themselves through craft.

Julie Jackson, author of Subversive Cross Stitch: 33 Designs for Your Surly Side, tells Bustle that she came to cross-stitching about 20 years ago, when she was looking for a therapeutic art project while stuck in a terrible job.

"I picked up an ornate sampler and stitched the word 'f*ck' in the center," she said. "It made me so happy I wanted to share the idea with others, so that's how I started Subversive Cross Stitch."

She's still offering up grids to decorate baby booties with "booty" on one foot and "licious" on the other, as well as a kitschy homage to the now iconic McSweeney's satire "It's decorative gourd season, motherfuckers," among dozens of other cheeky patterns, but Jackson has taken a definite swing toward the left after almost 15 years of deliberate political neutrality.

"The recent turn of political events has absolutely changed my work. … As much as some could take my four-letter-words as offensive, I've actually always been very mindful to avoid offending anyone — particularly when it comes to religion or politics. Once the Women's March happened, I could no longer stay silent," she said. "I wrote about it on my blog and jumped in with 'Nevertheless She Persisted.'"

Since then, wristbands reading "persist" and "resist," a kit to make a large cross-stitched "DISAGREE" sign to hold up at marches or town hall meetings, and "reclaiming my time" patterns have all seen healthy sales on Jackson's site. She said she doesn't see all of her work as activism, but that expressing herself and giving others the tools to make their own voices heard is a "craftivism" she's pleased with, especially since you won't be seeing her at many in-person protests.

"I'm not comfortable in crowds, so I do my protesting online," she said. "I'm the one throwing rocks from behind the curtain."

Katie, a 27-year-old New Yorker (last name withheld by request), has been stitching since she was taught by her mom as a kid, and started making her own patterns in college. Though she does have a shop on Etsy ("I live in a small apartment, you can only display so much cross stitch in your apartment before it gets weird") of the pro-woman, pro-booze, and pro-Queens varieties, she said that what keeps her coming back to the needle and thread is the sense of purpose and calm. When she threads her needle, usually in front of the TV after a long day's work or on the subway, she also untangles her own thoughts.

"I don't know that it was a conscious decision to take on a theme, but I tend to make things that ... either make me happy or work something out for me or kind of express where I am," she said. "So after the election, I felt even more political than usual and I think it came out even more."

So among those triptychs of New York City bridges and odes to gin, you'll find a scarf whose tails read "I is for Intersectional, F is for Feminist" and a pattern cheerfully proclaiming the owner a "feminist killjoy."

It's not just that it's easy and soothing, either: Katie relishes the irony of taking a ladies' craft and turning it on it’s head for nasty women: "I've always enjoyed kind of subverting people's assumptions about traditionally feminine activities."

Indeed, cross-stitch saw Insta-popularity from the pro-Hillary set before the surprise results of November 9. Downey, who had mounted an anti-gun violence fiber arts exhibit during the election, had planned to have a celebratory community workshop stitch n' bitch of sorts the Saturday after the election. What she found in the circle after Trump’s win was more moving than she could have expected, and an affirmation of the roles that cross-stitch and embroidery now play in her life.

"Obviously it had a very different tenor," she said of the meet-up. "I brought in a therapist to facilitate this discussion — people were going to need more than just a needle and thread and me to process it." But, she said it was worth it. “I can't think of a more healing or comforting experience than what that day represented." Downey said while the collective energy in the room that day was tense and full of grief, if was for her, and the other women there, it was the right place to be.