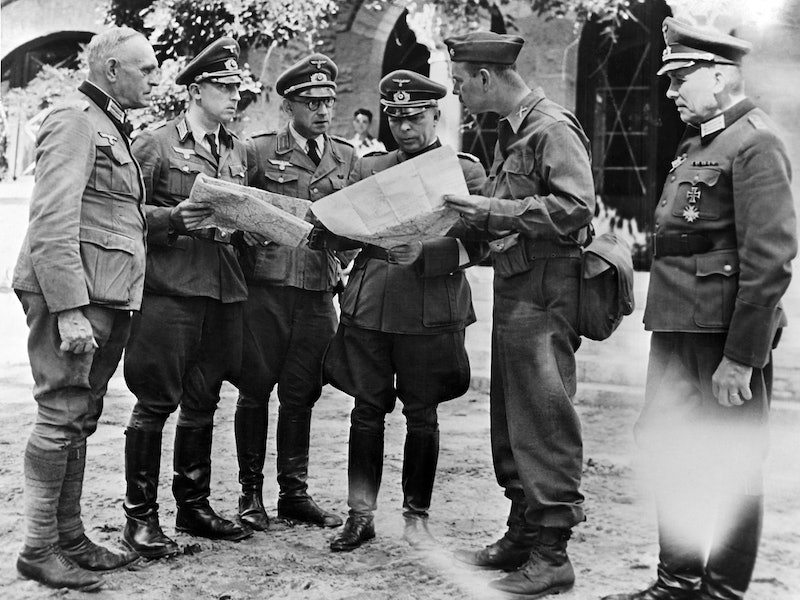 Netflix's latest docuseries, The Devil Next Door, follows a Ukrainian man named John Demjanjuk who, after immigrating and spending much of his life in Ohio, was convicted in 2011 of being an accessory to the deaths of 28,060 people during World War II. Demjanjuk maintained his innocence until his death in 2012, and his exact involvement (or lack thereof) in the war is still contested to this day. But it's clear his story is one of many: there have been thousands of other alleged Nazis living in America after WWII.

According to the Associated Press, approximately 10,000 suspected Nazis emigrated to the U.S. after the second World War — often with the assistance of American intelligence officials, who saw them as potential spies and informants in the Cold War. (A 2010 report from the Department of Justice confirmed this.)

"They sort of had put in their service. This was their 'reward' ... for their spy service ... coming to the United States and being able to live out their lives basically with anonymity and no scrutiny," Eric Lichtblau, author of The Nazis Next Door, told NPR's Fresh Air in 2014.

Now, there are people whose job is to find them. Both Efraim Zuroff and Eli Rosenbaum are Nazi hunters with different agencies, according to the New York Post. "We are continuing the search because the most dramatic part of our work is life expectancy," Zuroff told the outlet in 2018. "I'm the only Jew in the world who prays for the good health of Nazis."

Hermine Braunsteiner Ryan, for example, was a housewife living in Maspeth, Queens whose past as a concentration camp guard was revealed in 1964 by the New York Times. She was extradited to West Germany in 1973, where she was sentenced to life in prison in 1981. Her nickname had been the "Stomping Mare," and she was said to have whipped women for not properly sewing on their prison numbers. Ryan died at the age of 79 in April 1999.

According to NPR, Jakiw Palij was the last-known Nazi living in the U.S. He died in early 2019 at the age of 95 — 70 years after he came to the U.S. on the claim that he'd worked on his father's farm during WWII. In reality, Palij had been an armed guard at the Trawniki camp in Nazi-occupied Poland, to which he admitted in 2001, according to the aforementioned New York Post report.

After Pajij was extradited to Germany last year, the Post reported that Zuroff began receiving other tips. "As soon as the news hit about Palij, I got calls from people who suddenly realized that their neighbors might be Nazis," he said. "There are a lot of Nazis out there who were born after 1920 and are still alive. People without a conscience seem to live longer."

Another such person is Michael Karkoc, who was born in the Ukraine and moved to Minnesota, per the Associated Press. Although he was accused of killing civilians during WWII, his son, Andriy Karkoc, has maintained his father's innocence, telling the AP in a statement, "My father was, is, and remains innocent. We look forward to his complete exoneration." Polish authorities put out a warrant for his arrest, and as of March 2018, they were in the process of extraditing Karkoc to Poland for trial.

And these are just a few. The Associated Press also mentions Feodor Fedorenko, Karl Linnas, Arthur Rudolph, and Valerian Trifa as being suspected Nazi war criminals who'd been deported from the U.S. at some point. Perhaps Netflix will release docuseries about them someday, too.

More like this
What Does Michael Peterson’s Family Think Of 'The Staircase'?
By Arya Roshanian
Michael Peterson & Sophie Brunet’s Relationship Timeline
By Morgan Leigh Davies
Don Crowder Successfully Defended Candy Montgomery, But His Story Ended In Tragedy
By Gretchen Smail
All The Theories About Kathleen Peterson’s Death
By Morgan Leigh Davies
Get Even More From Bustle — Sign Up For The Newsletter