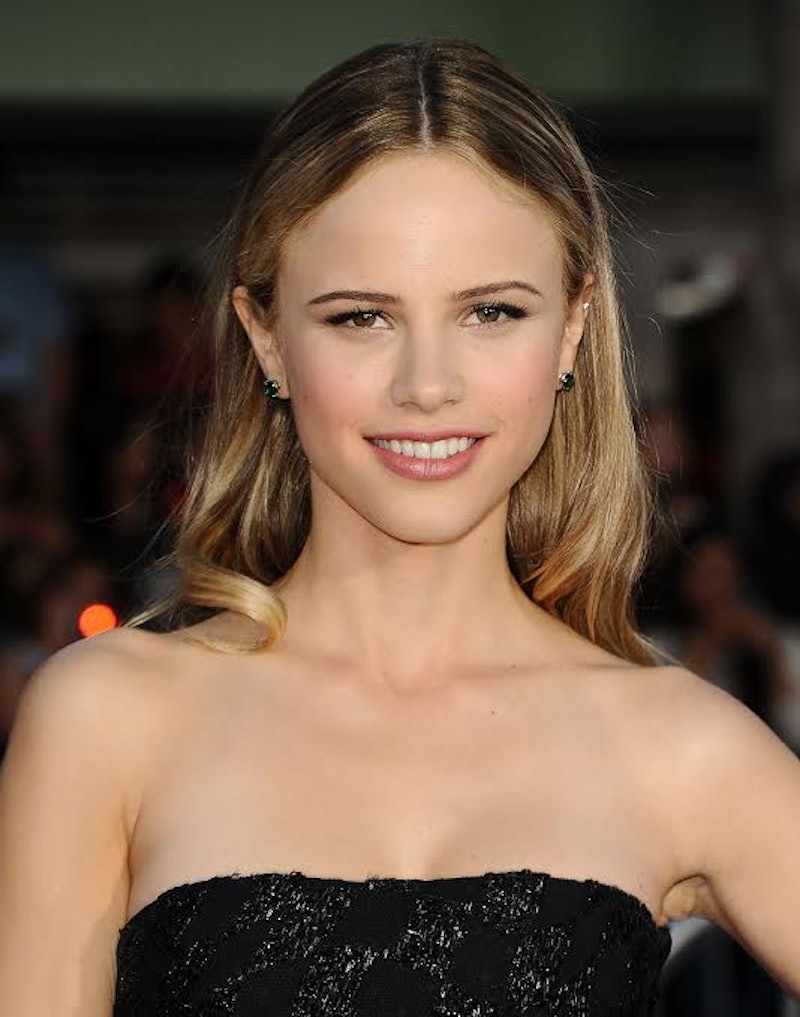 Of all the many high school-movie cliches that the new thriller Before I Fall defies, one of the most refreshing is that of the mean girl. In countless teen movies, from Heathers to Bring It On to, well, Mean Girls, there's always one popular, gorgeous teen who rules the roost, ordering around a group of minions and terrifying everyone who gets in her way. It's a trope as old as time, but while there is a teen leader in Before I Fall (played by Halston Sage), that's where the similarities end.

"My thing with Lindsay was that she wasn’t the stereotypical mean girl that we’re so used to seeing in high school movies, because she’s so dynamic and you actually get to learn why she’s mean," Sage says, speaking to Bustle via phone the day of Before I Fall's LA premiere. "You get to see a side of her that you don’t typically get to see, which is that her parents went through this terrible divorce, so she’s really broken inside, and so the reason that she treats other people not so nicely is only because that’s how she finds her control in life, by making other people feel as broken inside as she feels."

"And I think," Sage continues, "as you get to know that about her, you have a little more sympathy for her."

It's true; as the events of the movie unfold, it's surprisingly easy to feel not only for Lindsay, but for her group of friends, all of whom share her penchant for casual cruelty towards those lower on the high school totem pole. As the film's protagonist, Sam (Zoey Deutch) relives the same day of her life over and over again, the layers of each girl's personality are unraveled, and all of them — Lindsay, most significantly — are shown to be far less one-dimensional than their steely exteriors would imply.

For Sage, who's no stranger to the on-screen "mean girl" (her career started with a part playing the popular Grace on Nickelodeon's How to Rock, and she starred as Lacey, a well-liked but judgmental teen in the 2015 John Green adaptation Paper Towns), Lindsay's complexity was a breath of fresh air.

"That’s actually one of the reasons why I wanted to do the film, because of my first meeting with Ry [Russo-Young, the director]," Sage says. "We had this really honest, authentic vision for a high school movie that I was so interested in... not just the typical high school movie that we’ve seen 20 times growing up."

As a fan of the 2010 Lauren Oliver book Before I Fall is based on, Sage jokes that she was "ready to sell my soul" to be cast in the movie, and it's no wonder why. The film is a smart, entertaining adaptation that all of its stars can take pride in, but for Sage and her co-star Deutch, especially, it's a showcase for their significant talents. Sage is captivating as Lindsay, and a party scene in which the teen vigorously defends her friends from an unpopular girl spewing insults is the movie's stand-out. Lindsay is in the wrong — the girl has been bullied by their group for years, and has every reason to be furious — but watching Sage's performance, it's impossible not to be awed by her fervor.

Sage was no teenage mean girl herself; a competitive equestrian career and her television debut prevented her from getting too involved in most of her all-girl high school's cliques and dynamics. But as a 20something woman in Hollywood with a younger sister still in her teens, she knows all too well that female friendship is often anything but simple. Still, she's lucky, she says, that her own group treats each other with the kind of loyalty and respect not often shown in on-screen portrayals of female BFFS.

"I do have that close, tight knit group of friends who are the opposite of jealous," Sage says, perhaps referencing her membership in Taylor Swift's lady-heavy squad.

"We’re all friends with everyone who’s at the top of their game at whatever their career is or whatever they love to do," she says. "But, mainly because we connect as human beings, we don’t have to be competitive with each other... we can all be supporting of each other and have fun together, and all still be really good at what we do."

This seems simple enough, but in a world where women are often portrayed as fighting each other tooth and nail for every role or promotion, or shown as one-dimensional figures who care about nothing but themselves, that reminder is all too necessary. Thankfully, both Sage and Before I Fall are intent on changing that narrative, and giving ladies everywhere — "mean girls" or not — the chance they deserve to be seen as real, complex human beings.

More like this
Lauren Lyle Is Keeping The Contents Of Karen Pirie’s Bum Bag A Mystery
By El Hunt
On 'The Handmaid’s Tale,' Christine Ko Fights Back
By Gretchen Smail
Constance Wu On Self-Doubt, Family Drama, & Her Sister's Unwavering Support
By Constance Wu
A New Scooby-Doo Movie Confirmed Velma Is Gay & Twitter Is Pumped
By Radhika Menon
Get Even More From Bustle — Sign Up For The Newsletter