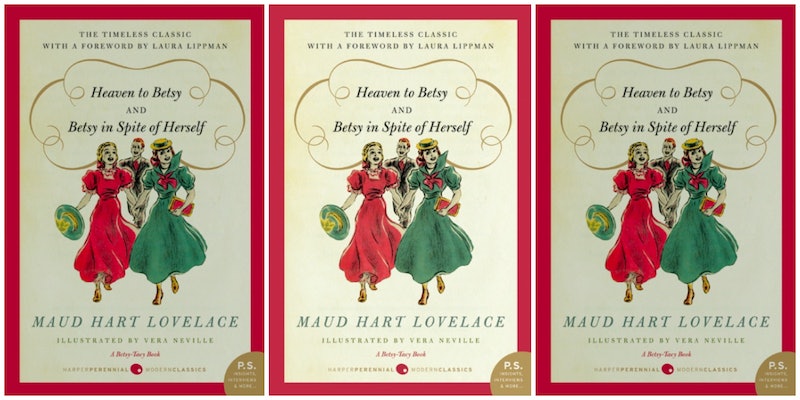 I was a freshman in high school, when my mother came home from a shopping expedition with a bag for me from Borders in her hand. I met this surprise with excitement and a little bit of fear. My mom and I had very different taste in books, so I never knew what to expect. Even still, it was likely better than anything my Dad would choose, as he had a habit of picking up whatever had a pink cover at Wal-Mart (which led to me reading far too many Harlequin romances at far too young an age). My mom handed me Heaven to Betsy by Maud Hart Lovelace, a novel about Betsy Ray, a freshman at Deep Valley High School in 1906. I fell in love.

Like me, Betsy was stubborn, liked to talk, aspired to be a writer, and had a penchant for self-improvement. (“Betsy was always making lists” Maud Hart Lovelace wrote.) I had moved the summer before my freshman year in high school, and the transition hadn’t been easy. That year, I lived vicariously through Betsy’s crowd and vowed, at age 14, that one day I would have a home full of music, fudge, and people — just like Betsy.

For those unfamiliar with Lovelace, the series follows Betsy through high school and beyond, and bares witness to the annual Deep Valley High essay contest, Betsy's first short story sale, her yearlong voyage to Europe, and eventually, her marriage to Joe Willard, a stubborn, prideful writer.

Betsy, like me, was always trying to improve herself. She wanted to wear more perfume, brush her hair 100 times every night, and devote herself to her writing. When the going got tough, Betsy always found herself at a farm, soaking up nature, and writing in peace. I was never quite sure if I loved Betsy so much because I related to her or because I wanted to be her. In some ways, those things are one in the same. I finished those books my freshman year of high school, devastated that Betsy married Joe and decided to spend her time keeping house. Even though Betsy was still devoted to her career, I wanted her to go to college, spend more time traveling the world, and immerse herself fully in her writing. The limits of turn of the century Minnesota seemed too much for me.

I read Heaven to Betsy a few more times in high school, but didn’t reread the entire series until I had college and a master’s degree under my belt. I returned home the summer between my masters program and the start of my Ph.D for the longest period of time in five years. I spent the summer writing, making goal lists, and painting, but I found time to pick up the Betsy-Tacy books once again. I raced through the entire series, and I loved them even more than I did when I was a teenager.

As it turned out, Betsy and I still had much in common. I now shared Betsy’s relentless ambition: I'd send off article draft after article draft, just as Betsy had. And I still shared Betsy’s love of list-making and her constant quest for improvement. Like Betsy, a new list represented a shift in my life. A new grade, a new school, an end to a romantic escapade. I would cut my hair, read a book a week, and write day after day. Having just been on my first trip to Europe, Betsy and the Great World deeply resonated with me. What a luxury Betsy had, a trip across Europe with nothing to do but write! I still found myself, at the end of the summer, unsettled by Betsy’s marriage to Joe. Not because I had any animosity toward those who chose that lifestyle, but because it seemed to me that Betsy never wanted it.

While searching for other books written by Maud Hart Lovelace, I discovered Emily of Deep Valley, her only standalone young adult novel. Emily was different from Betsy; she was a loner, she was reserved, she was practical. Emily was a lover of learning, but she couldn’t leave her elderly grandfather to go to college. I related closely to Emily’s loneliness, but even more than that, I related to her efforts to educate herself from home. Like Betsy, Emily makes a self-improvement plan. She takes dancing lessons, piano lessons, and starts a Robert Browning poetry class with other women in the community. She starts a club for Syrian immigrant children and an English class for their mothers (never more relevant than now). More than Betsy, Emily creates an environment suitable for learning in her home.

At age 24 — as soon as I finished Emily of Deep Valley — I cracked open my notebook to create my own self-improvement plan. Mine would be different from Emily’s, as I knew of no Syrian immigrant population and had absolutely no musical talent. But I did vow to sign up for another painting class, complete a Yale Open Course on poetry, volunteer with the formerly incarcerated, and follow a new exercise regimen. More than ever, I realized that habits I had refined over the years — habits of self-improvement, learning, and ambition, were habits I purposely cultivated as a child after reading Lovelace’s novels. And I am not the only one. Mary Kay Andrews said of the books, “It had been many, many years since I’d spent time with the enchanting Betsy Ray, but after reacquainting myself with these classics, I now realize that one of the reasons I believed I could someday become a writer was because of Betsy’s own infallible confidence that she would be a writer.”

Even after Betsy lost the Deep Valley High School essay contest two out of the three times she competed, had manuscripts rejected from the Ladies Home Journal more times than she could count, and dropped out of the University of Minnesota, she never doubted that she, a young girl living at the turn of the 20th century, deserved to be a writer. And for that I must thank her.