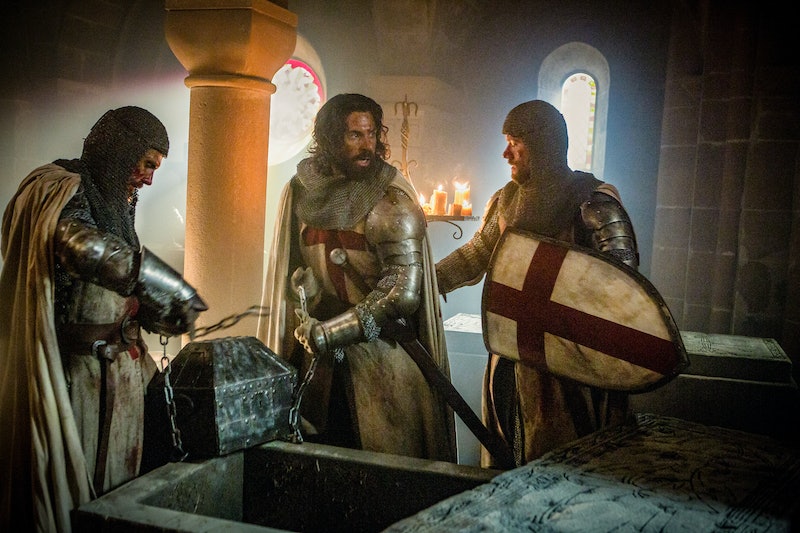 Knightfall, the new television series from the History Channel, chronicles the fall of the Knights Templar, a military group that fought on behalf of the Catholic Church – and follows one member who wants to find the legendary Holy Grail. The show is a window into the distant past, and while Knightfall isn't entirely historically accurate, it uses fiction to explore the complicated history of this historic organization.

"We take the key events and characters and weave our story into them," Knightfall showrunner Dominic Minghella tells Bustle. "Much of our content is true to the historical record, and while we take some liberties for the purposes of drama and intrigue, history gives us at least the framework. And — since the Templar story is so rich — often much more!"

While Knightfall doesn't present a 100 percent accurate account of the organization's fall from grace, it combines the real story of the Knights Templar with popular fiction surrounding them. The long-standing fictional narratives about the Knights Templar have become as important to their legacy as the reality of their existence as a powerful military and financial force.

Perhaps the biggest leap from fact to fiction that the show takes is the nature of the Holy Grail and the Knights Templar's relationship to the object. As historian and Knightfall lead consultant Dan Jones explains in his book The Templars: The Rise and Spectacular Fall of God’s Holy Warriors,

"[The Holy Grail] was high fantasy, which people in the Middle Ages would have recognized as such: The Holy Grail was no more real than Spectre in today’s James Bond films. Yet as time went on ... [this] entertaining but bogus pseudo-history became confused with the real history of Christianity, and of crusading.

Much of Knightfall focuses on the Templar's leader, Landry, and his own personal quest to find the Holy Grail. While any and all Holy Grail-related material from Knightfall can be safely considered fiction, the connection between the two has historical precedence. Over time, fictional stories about the Templar's relationship to the Holy Grail has transformed them "from a crusader militia into the guardians of the mythical Grail" in the public eye.

When the series isn't following the quest for the Holy Grail, Knightfall's depiction of the Knights Templar seems to be deeply rooted in reality. Not all of the names are entirely accurate, but Knightfall does manage to present a striking glimpse at the group's military and political prowess. The Knights Templar rose from being bodyguards, protecting western pilgrims in Jerusalem to powerful warriors in the Christian crusades, and eventually "one of the medieval world’s richest organizations."

Knightfall introduces the Knights Templar near the height of their power, just before their downfall. At their peak, the power of the Knights Templar rivaled that of other powerful medieval entities. Jones explains that at the peak of their power, The Knights Templar "helped finance wars, loaned money to pay kings’ ransoms, subcontracted the financial management of royal governments, collected taxes, built castles, ran cities, raised armies, interfered in trade disputes, engaged in private wars against other military orders, carried out political assassinations and even helped make men king."

The Knights Templar may have never found the Holy Grail, and likely never even searched for it in the first place, but their actual accomplishments far outweigh finding a special cup. The power that this paramilitary organization held over the world at large makes their decline, chronicled in Knightfall, all the more shocking. While the more fantastical elements of Knightfall may be fictitious, the amazing truth behind the Knights Templar is what makes this show a must-watch for any medieval history buff.