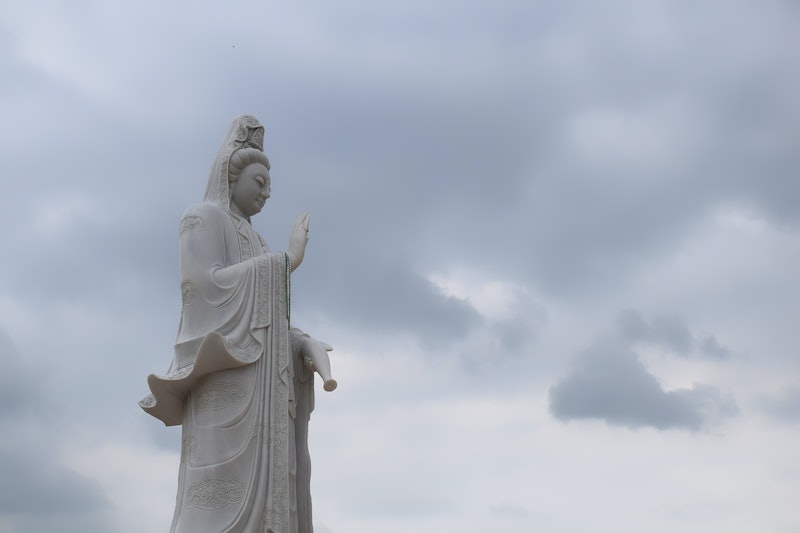 The debate over how language shapes our collective reality has gripped philosophers and thinkers for millennia. It is undeniable that our language has the potential to both elevate and limit our understanding of gender. After all, gender is a nebulous, fluid, and very personal experience. I liken it to the concept of yin and yang (陰陽) from Chinese philosophy. In simple terms, it’s the principle that governs all things. Yin represents the feminine, natural, and transformative experience, while yang represents the masculine, structured, and creative experience. Yin and yang exist in both inseparable and contradictory states. When I think of my gender, I imagine a neverending swirl of these two energy forces within me. Some days, yin dominates; other days, yang does; and sometimes, the two stand in equal measure. Though it’s not something I can control, it is something that I’m learning to articulate.

As a Taiwanese American, my reality is governed by Mandarin and English, which makes my understanding of defining gender doubly confusing. In the U.S., we are just beginning to formulate the diction to define the unique experience of gender with words such as “nonbinary,” “gender nonconforming,” “genderqueer,” and “gender fluid.” Because of the emergence and normalization of these terms, those who live outside of the binary of man and woman, like myself, are equipped with the tools to pinpoint their gender. Unfortunately, there are no such words like these in my native language. The characters for man and male (or woman and female) are the same, which means there is no distinction between gender and sex. This linguistic limitation renders trans folks invisible — an erasure that no doubt torments Taiwanese trans people everywhere.

Without the words to explore my gender identity in my native language, it is difficult not to view my genderqueerness as a form of whitewashing. After all, have you seen much representation of trans people of Asian descent in the West? I haven’t, and I certainly haven’t seen them in the East, either.

Outside the issue of gender identity, I suspect that many Asian Americans carry a fear of being whitewashed. The task of keeping our native culture alive in a foreign land is a responsibility that nearly all immigrants and their children carry. So when faced with experiences that seemingly contradict our heritage, it’s unsurprising that so many of us turn a blind eye.

However, whether our community acknowledges it or not, queer people exist, and we have for centuries. There are many more examples of the ancient history of transgender and queer identities in East Asia, such as Peking Opera (京剧), kabuki theatre (歌舞伎), the Golden Orchid Association (金蘭會), hwarang warriors (화랑), namsadang actors (남사당), and many others that completely break down gender norms as we understand them today. Therefore, it is entirely plausible that my ancestors may have been queer and/or trans — only they didn’t have the linguistic tools (or privilege of self-actualization) to be able to express them.

Gender is especially difficult to define for diasporic folks living in the space between two (or more) cultures. Under the Western lens, East Asian features are sometimes viewed as effeminate. An obvious example of this can be witnessed in the reception of the Korean music entertainment industry by Americans. Male K-pop stars are sometimes described in the West as delicate, feminine, and soft, although these men are the very embodiment of male beauty and sex appeal in East Asia.

This racial hyper-feminization of Asian people is so rampant that it has led to conversations around the “emasculation” of East Asian men. Unfortunately, few have considered how this hyper-feminized view affects transmasculine people. Although I am constantly misgendered as a woman in the U.S., I have also been misgendered as a man in Taiwan — which only reinforces just how arbitrary gender perception can be.

The subjective and arbitrary nature of gender perception is further demonstrated by the existence of Acrush, a Chinese boy band comprised entirely of female members. Despite their biological anatomy, these members fit seamlessly into the standard of male beauty set by the K-pop industry. For them, androgynous fashion isn’t a costume, just like it isn’t for me. They have all expressly emphasized that they are a boy band, not a girl band. As women who prefer to present in a masculine or androgynous fashion, the members of Acrush testify to the faultiness of social perceptions of gender.

Similarly, the visual kei movement of Japan is largely comprised of members who embrace androgynous aesthetics. With the use of elaborate hairstyles, heavy makeup, and extravagant outfits, these male performers embrace their flamboyant appearances — sometimes even engaging in fan service with other male members. I poured in hours upon hours of my adolescence consuming this movement, unaware at the time as to why I was so enamored with this subculture.

As I slowly unlearned and re-contextualized these norms, I began to realize that I can embrace both my Taiwanese heritage and my queerhood without compromising on one or the other.

As I rewatch these music videos now as an adult, I feel a deep sense of relatability to the performers on the screen. To me, dressing up extravagantly is not an act of femininity. Just as the visual kei performers are men while they are completely adorned in Victorian lolita, my own decision to wear makeup does not mean that I am a woman.

Makeup and fashion are not inherently feminine. This small epiphany, in conjunction with multiple small epiphanies, pushed me to the revelation that gender traditions were cultural and subjective. As I slowly unlearned and re-contextualized these norms, I began to realize that I can embrace both my Taiwanese heritage and my queerhood without compromising on one or the other. My growing self-disbelief was further validated by the deity Guanyin.

Guanyin (觀音) is the goddess of compassion, mercy, and kindness. She is also portrayed as Avalokiteshvara, the male Buddha of the Pure Land. There are several large temples dedicated to her throughout East Asia, which is to say that Buddhists and Daoists have worshipped a trans genderfluid goddess for centuries. If a god can be genderqueer, why can’t a mortal like me be, too?

Equipped with the privilege of self-actualization and the means to research and reflect on my identity, I — along with many other queer diasporic people — can begin to adjust language to fit both my gender and culture simultaneously.

It was during the summer of 2016 when I decided to socially transition from my given English name of "Michelle" to "Mintzu," a transliteration of my given Chinese name. It was both an attempt to close the distance between myself and my native country of Taiwan and a way to exist outside of the binary under a name devoid of gender. Just as new words have been invented to define various nonbinary gender experiences, this name was a brand new set of phonetics that I alone am tasked with defining. I am Mintzu — a four-way intersection between the binary of man and woman and Taiwan and the U.S.