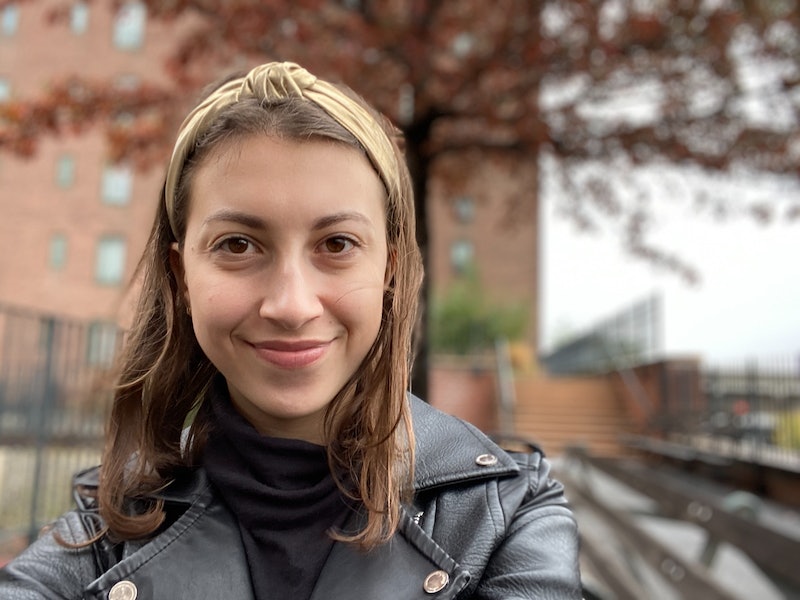 As I was about to jump in the shower a couple months ago, I caught a glimpse of myself in the bathroom mirror. Unlike every other day when this happens, I noticed something different that time. My hair was up in a bun, and I had missing pieces all along the bottom half of my head. I had been dealing with compulsive hair pulling and severe anxiety for a few months at that point, but I didn't realize how bad it had gotten. I definitely didn't realize I had patches of missing hair. And I panicked.

Once I guided myself through those initial emotions with some intense breathing exercises, I went into problem-solving mode. I knew I had a compulsive disorder to address, but in the meantime, I just wanted to hide the patches. That's when I turned to hair accessories. From top-knot headbands to metallic bobby pins, hair accessories have been all over runways, fashion spreads, and city streets for the past few seasons.

Since that day when I first noticed the severity of my hair-pulling habit, I have become a huge fan of the hair trend. Hair accessories allow me to feel a little more like myself, even if just for a few minutes.

My hair fixation began in seventh grade when I first learned about split ends. I remember sitting with one of my friends at a Bar Mitzvah service and watching her fiddle with the ends of her hair. I asked her what she was doing, and she casually told me she was pulling apart her split ends. That was it for me. I became obsessed with finding the split ends I hadn't even realized existed five minutes earlier and yanking them out.

The obsession followed me beyond that Saturday morning. I found myself picking at my hair during class or while hanging at home. Most of the time I didn’t even realize I was doing it. It became a subconscious mission to find every single split end and get rid of it. The more I began to fixate on the strands of hair on my head, the more imperfections I found. I started occasionally noticing small white flakes on my locks. Rather than letting them just sit there or naturally fall off my hair, I meticulously searched my hair for every remnant of dry skin and removed it. I was obsessed with poking and prodding at my hair. And I couldn’t get myself to stop.

As the habit continued throughout middle school and high school, many adults in my life told me that I was going to damage my hair. But there were no blatantly visible changes to my hair, so I didn’t try to formally address the issue.

Fast forward to last year, my junior year of college. I have experienced anxiety for most of my teenage and young adult life, but it escalated during that time. Some days it was hard to get out of bed in the morning. My mind would run through every decision, every encounter, every plan, and find reasons to worry. As my anxiety moved into depressive territory, the severity of my hair habit heightened. I wasn’t just separating split ends or removing pieces of dandruff; I was pulling out entire pieces of hair.

Dr. Marina Gershkovich, a licensed psychologist who specializes in behavioral and cognitive psychology, tells me that repeated hair pulling that results in hair loss and unsuccessful attempts to stop, two things I experience, are key indicators of compulsive hair pulling, which reportedly affects up to 4% of the population.

To this day, I still haven’t been able to beat the urge to pull out my hair. My hair is half as thick as it used to be. Like my other hair habits, I don’t initially realize I’m pulling it out. Most days at work, I only catch myself looking for the perfectly textured strand to pull out after I've already absentmindedly created a pile of brown locks on my lap.

While stress and anxiety seem to heighten my impulse to pull my hair, it also happens in times of boredom or relaxation. “Stress and anxiety can exacerbate hair pulling,” Dr. Gershkovich tells me. “It does not mean, however, that low-stress is associated with the absence of hair pulling.” I have so badly wanted to just attribute my hair loss to stress and tell myself that as soon as the stressful period is over, my hair will come back. But I know that it’s more than that. The urge to pull has followed me through most aspects of my life, not just during stressful ones.

I have begun to work on my own plan to combat the urge to pull my hair. On my therapist's recommendation, I intend to consult a naturopath about potential solutions. Dr. Suzanne Mouton-Odum, a licensed psychologist and member of the Scientific Advisory Board of the Foundation for Body Focused Repetitive Behaviors, tells me another common treatment for hair pulling is cognitive behavioral therapy. “This means that a therapist will evaluate the internal (thoughts, sensations, emotions) and external (places, implements, time of day, presence or absence of people, activities) triggers for hair pulling to build what we call a functional analysis of the behavior,” she says.

While wearing headbands or barrettes by no means rids me of the need to pull my hair, these accessories have helped me start to see my hair in a positive light again. When I look in the mirror, I have a hard time getting passed my thin, stringy hair. My locks have never been super thick, but they were never as fine and damaged as they are now. But when I put on a headband, or I pull the front pieces back with a clip, I feel a little more like myself. I feel a little less defeated by an urge I can’t control. I remember that I’m lucky to still have hair I can accessorize.

No matter how many times I get weird looks for playing with my hair, face people telling me to stop pulling, or look down to find a mess of hair on my desk, the impulse to pull still chases me. Maybe, if I treat the disorder with kindness rather than anger, I can find the courage to get the help I need. The urge is there, and it sucks. But, it’s part of me, and I'm just beginning my journey to recovery. Here's hoping that hair accessories stay in style long enough for me to take the health of my hair out of my hands.

More like this
'Bachelorette' Vet Clare Crawley Unveiled 2 Special Wedding Day Accessories
By Stephanie Topacio Long
13 Spring 2023 Fashion Trends That Feel So Fresh
By Allie Fasanella
The Biggest Fashion Moments Of Paris Couture Week 2023
By Dominique Norman
Attention, Millennials, Italian Charm Bracelets Are Officially Back
By Hannah Orenstein
Get Even More From Bustle — Sign Up For The Newsletter
From hair trends to relationship advice, our daily newsletter has everything you need to sound like a person who’s on TikTok, even if you aren’t.