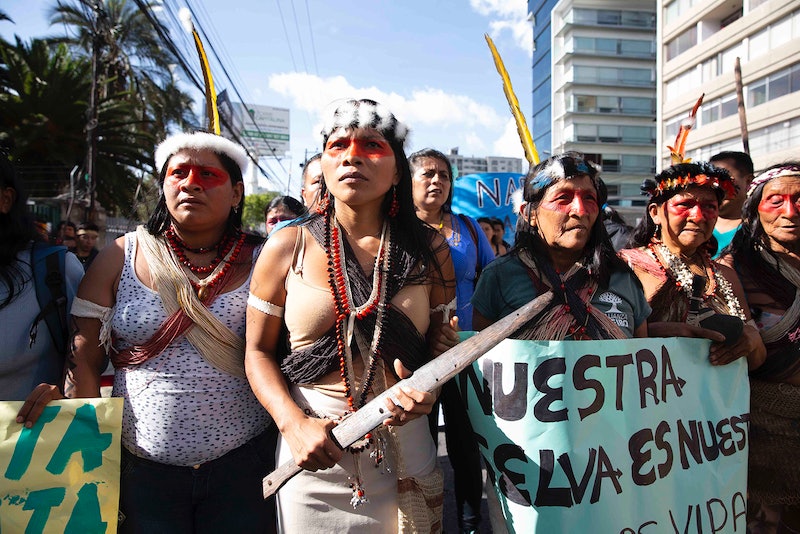 The burning of fossil fuels is the single biggest contributor to climate change, and women are increasingly leading the charge to hold oil and gas companies accountable for the irreversible damage they have wrought on our planet. Women are more often impacted by the pollution from extractive industries like oil drilling, which also frequently bring sharp increases in sexual violence, human trafficking and other gender-based abuses, according to Oxfam. Indigenous women are particularly affected and have been central to worldwide efforts to organize against the fossil fuel industry.

In Pastaza, Ecuador, a 11,398-square-mile verdant expanse of largely intact Amazon rainforest, indigenous women’s intense and decades-long resistance to oil drilling has been effective in fighting off a long list of oil companies. Osprey Orielle Lake, the executive director of Women’s Earth and Climate Action Network (WECAN) International, a nonprofit that works with women around the world, including in the Amazon, tells Bustle that the indigenous communities in the region have fought to protect their land from oil drilling through a combination of local actions, international policymaking, and campaigns “with a powerful message of respect for the Earth’s natural laws and the rights of indigenous peoples.”

“In many indigenous communities, women are the backbone of climate justice movements, and at the forefront of local and global efforts to protect and defend their territories, which house immense socio-ecological diversity,” she says.

The indigenous women of Pastaza have been indispensable to the broader struggle against oil drilling in their territories, both in the courts and on the ground, where they use their bodies to protest their government’s attempts to sell the rights to drill on their land. They unite around a strong message that frames the unique ways women are affected by oil drilling as central, not tangential, to the broader climate justice movement, successfully stopping oil companies from damaging their lands in the process.

What Fossil Fuels Do To The Amazon And Its People

Ecuador has around 8.3 billion barrels of proven crude oil reserves, the third-highest amount in the world after Venezuela and Brazil. That’s more than what the entire United States consumes in a year. Almost all of these oil reserves are in the Amazon, one of the most biodiverse places on earth and its largest rainforest. In Pastaza, there are billions of gallons of oil underneath the trees, and the government and oil companies have been steadily destroying the forest there to extract it.

Rainforests absorb almost one-fifth of the greenhouse gas emissions causing climate change, acting as a huge sink to slow down the warming of our planet. A significant amount of the Amazon is owned or managed by indigenous people, and leaders in Pastaza who’ve long dealt with the destruction of the rainforest are increasingly confronted with the effects of a warming planet.

"The Amazon is on fire, natural systems are going berzerk. Everyone can see the effects of climate change now."

Gloria Ushigua, president of the Sápara women’s association, one of seven indigenous nations in Pastaza, says she stopped a dozen times on a canoe trip earlier this year to hack away at massive fallen trees blocking the river Pintoyacu, which is the main means of transport in an area without roads.

“When the rain comes now, it’s torrential,” Ushigua tells Bustle*. “It washes all the soil away and the trees can’t hold themselves up anymore. It’s harder to fish and harder to hunt, because all the animals are hiding from the rain.”

She, along with other indigenous leaders who spoke with Bustle, have reported more torrential and unpredictable rains, sustained drought, heavier winds, and previously unheard-of wildfires. Scientific studies back up their observations. Women in Pastaza are largely responsible for growing yuca (a large root that is a staple food in the Amazon), collecting water, and foraging daily from the forests, and so these leaders point out that was usually women who first noticed those shifts in the weather that are now impossible for anyone to ignore.

“A year ago I may have said that women see these effects even more so than men,” Patricia Gualinga, a leader of the Kichwa of Sarayaku, another indigenous nation in Pastaza, tells Bustle*. “But the Amazon is on fire, natural systems are going berserk. Everyone can see the effects of climate change now.”

The threat of oil has always loomed over indigenous communities across the Ecuadorian Amazon, and the area north of Pastaza shows what happens when extractive industries are allowed to drill in indigenous lands. From 1972 to 1993, more than 2 billion barrels of crude oil were extracted from the northern part of the rainforest. Around 17 million gallons of crude oil and 20 billion gallons of toxic waste from oil drilling were spilled into that area’s waterways, turning rivers black and sickening many local communities in what was once called “one of the largest environmental disasters in history.”

Nemonte Nenquimo, the first female leader of the confederation of the Waorani in Pastaza, witnessed this pollution first-hand. She recalls how oil drilling had destroyed all of the territory of the indigenous nations to the north of where she lives.

“It was such a disaster and so painful to see, so I decided to mobilize so that no petroleum would never enter my territory,” she tells Bustle*.

The Waorani, Sápara, Kichwa, Andoa, Shiwiar, Ashuar, and Shuar nations in Pastaza have historically fought wars among themselves, but their greater, shared battle is now against oil drilling. For decades, these seven nations have been fighting attempts by the Ecuadorian government to sell the subsoil rights to their territories to oil companies and other extractive industries — and they’ve been winning, thanks in part to leaders like Nenquimo.

"We are not just fighting for the indigenous people; the Amazon is essential for the entire world.”

Nenquimo led the Waoroni in a years-long court battle to stop oil drilling in their territories, a fight they won in April when judges ruled in favor of the nation’s right to be consulted on any planned extractive projects on their land — and their right to say no to those projects. Pictures of the Waorani victory in the media show a group of women, of all different ages, celebrating their victory with abandon. This wasn’t accidental, according to Brian Parker, a lawyer with Amazon Frontlines, a nonprofit that gave the Waorani legal support.

“Nemonte would surround herself with strong women — surround herself with female elders and youth and hand the microphone in press conferences to two women elders who were also plaintiffs in the case,” Parker tells Bustle. “Women traditionally have a strong leadership presence in Waorani culture, but with the presence of Nemonte, she really made this a women’s fight.”

That win built on previous mobilizations from the other nations in Pastaza. In 2012, the Kichwa village of Sarayaku won its own massive victory when the Inter-American Court of Human Rights ruled that the Ecuadorian government must consult with indigenous communities, as well as pay for physical and moral damages, after it auctioned off part of their territories to oil companies. The landmark case set a precedent for free, prior, and informed consent, which is the right of indigenous people worldwide to give or withhold consent for projects that may affect them or their territories.

That case was also a turning point for the visibility of women in the fight against oil drilling. According to Gualinga, who was the elected leader of women’s and family issues for Sarayaku at that time, women were considered to be limited to working on issues involving the family and household even when they’d been central to the movement against drilling.

“Before we were organizing and working just as much, but we were invisible,” Gualinga tells Bustle*. “Now, we are still doing the work, but we are finally visible. ... There is a long way to go, and a lot to fight for, but it’s clear that women are the ones that are going to give power to the climate movement.”

Putting Their Bodies On The Line

Outside the courts, indigenous women have been putting their bodies on the line to stop oil drilling in Pastaza. In 2013, more than 100 women from the seven indigenous nations potentially impacted by the Ecuadorian government's attempts to open up their territory to oil drilling walked from Puyo, the capital of Pastaza, over the Andes to Ecuador’s capital of Quito. Many of the marchers at this “Women’s Mobilization for Life” had little money or resources and had children in tow.

Some of the same women faced police batons, horses, and tear-gas bombs two years later during a general strike in Ecuador. Several indigenous women were reported to have been savagely beaten by the police, and a joint statement by local human rights and indigenous peoples associations reported that some had been “violently dragged out of their traditional clothing,” according to The Guardian. But that didn’t deter them from continuing to protest. Last year, indigenous women camped for almost a week outside Ecuador’s presidential palace and were eventually granted an audience with the president, handing him a 22-point “Mandate of Amazonian Women” against oil drilling in their communities.

“Women are the main victims [of oil extraction]—their ability to feed their families becomes impaired,” representatives explained in the collective statement*. “There is deterioration of family health and they suffer the division of their communities and other forms of violence.”

"Now, we are still doing the work, but we are finally visible."

Ushigua, the leader of the association of Sápara women, knows this violence well. After learning that the Ecuadorian government had given away drilling rights in her territory to the Chinese government, she was part of a group of women who stood on a runway in her village to physically block a plane from landing there. Ushigua was publicly demeaned on government-run TV for her activism, and was charged with terrorism and obstruction of justice for demonstrating against oil development in the Amazon, according to Frontline Defenders, a nonprofit that works with at-risk human rights activists.

Frontline Defenders outlined more direct threats and intimidation against the activist. In 2015, masked men attacked Ushigua and her family, including children who lived in the home, with tear gas and tasers, and beat her badly with a baton. Then, in 2016, her sister-in-law was brutally killed in what the organization claims was a case of mistaken identity and an assassination attempt against Ushigua.

The immense personal risks Ushigua and other indigenous women leaders in Pastaza have taken so far have paid off. Amid all the pushback, the Chinese government announced plans to break off its contract with Ecuador in 2018.

“After the Chinese pulled out, the government told me that I was responsible for their debt to China to try to get me to stop fighting them,” Ushigua tells Bustle*. “But we’ll keep fighting the state and any other company that tries to enter our territory. We are not just fighting for the indigenous people; the Amazon is essential for the entire world.”

*These quotes were translated from Spanish.