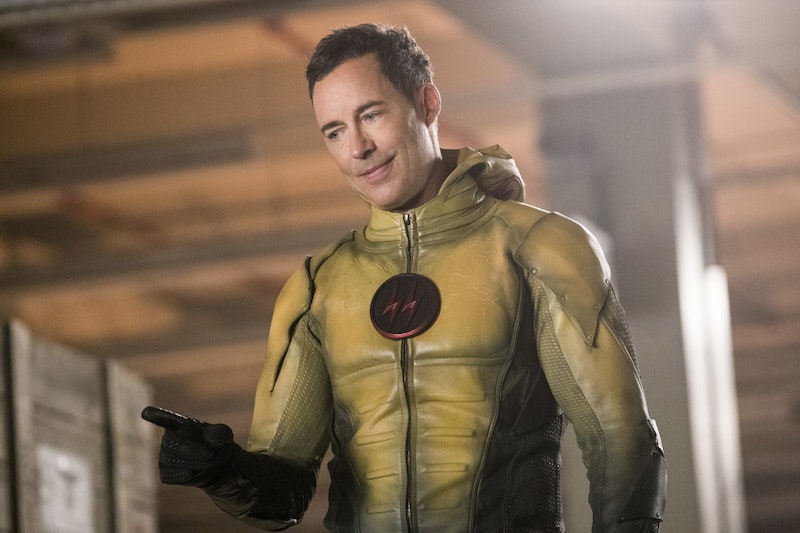 Whatever your favorite superhero property is right now, you can't deny that the CW's DCTV universe has absolutely mastered the art of the TV crossover event. The four series' latest crossover, "Crisis On Earth-X" features the invasion of Earth-1 by some familiar faces. Eobard Thawne is still alive in "Crisis On Earth-X," and helping out a team of villains from a reality ruled completely by Nazis.

Even more surprising than seeing an evil version of Supergirl and Oliver Queen (and the two of them paired as a married couple) is the reappearance of the villain from The Flash Season 1 who was seemingly erased from history. After he was killed onscreen not just once, but twice, how is Thawne still around?

The speedster with the face of Harrison Wells was wiped out of the Earth-1 timeline when Eddie took his own life on The Flash. And the Reverse-Flash played by Matt Letscher met his end on Legends of Tomorrow. But in the first night of the big DC crossover, it seems that the Harrison-lookalike version was still able to escape with his memories in tact. He's joined forces with the Earth-X crew, and Evil Oliver seems to be the leader of the pack.

Earth-X, the version of Earth so terrible that it's not even worthy of being counted among the other 52 versions of the planet, is a place that most of Team Flash didn't even know about. (Only Wells had an idea of its existence before the evil supers snuck into their timeline.) So even with the team's familiarity with inter-dimensional time travel, it's no surprise that the villainous Reverse-Flash was able to hide from Barry, his former foe and obsession, there. Though Thawne is "an idiot," as his doppelgänger says, for working with the Nazis, it's actually quite clever cover. He's figured out a way to hide from Earth-1 while keeping his memories, powers, and existing alias (in his form as Harrison Wells) in tact.

There might have been another version of Eobard who originated on Earth-X, but the fact that this Thawne is wearing Wells' face and his signature Reverse-Flash yellow costume show that his hatred for Earth-1 runs deeper than the rest of his colleagues'. Barry instantly recognizes his first foe, who quips that he's wearing Wells' face "for old times' sake. Plus, you know... handsome." While Thawne is certainly in a jovial mood, he doesn't have much of an answer as to why he continues to exist after being killed twice. Of course, Thawne deflects the question, saying, "With time travel, Barry, it’s so very confusing." But whatever the reason, it seems that killing a speedster with the power to travel through time, the ability to change his face, and a mission to torture Barry Allen is harder than it seems.

In fact, perhaps by traveling to another Earth — an Earth so far outside the travels of the heroes — Thawne was able to take over the body of the version of his ancestor who lives on Earth-X (presuming there is one) and was able to take over that Thawne's body, giving them his powers and his memories, which is why he's adopted his Wells disguise in order to more closely match his former self. Or maybe Thawne no longer even has a body. After all, he's been holding his own against a Barry who should have much stronger powers since they last battled — maybe Thawne, too, has been spending more time learning the ins and outs of the Speed Force, increasing his abilities and allowing himself to exist outside of the normal timeline where he was killed.

Whatever the explanation, though, it seems clear that the person with the greatest control over time and the most agility traveling between worlds will win this major crossover event. And it will take the combined powers of Team Arrow, Flash, Supergirl, and the Legends in order to stop Eobard Thawne and his new Nazi pals once and for all.