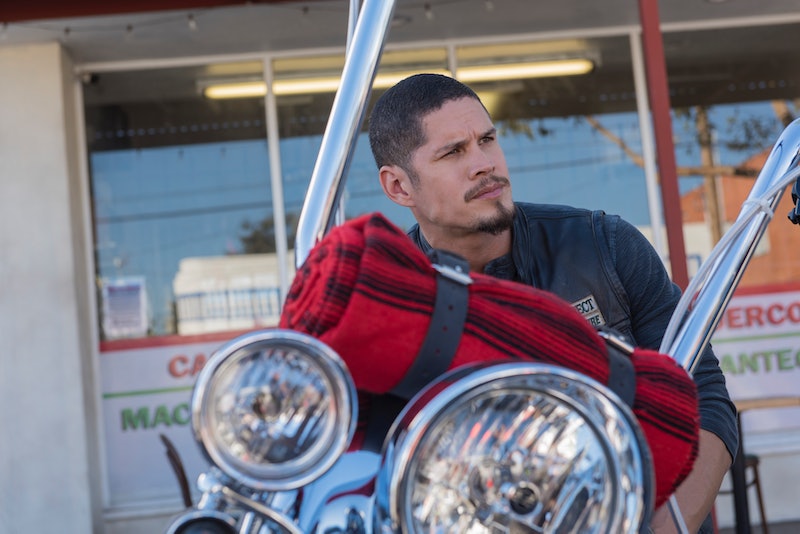 It's been nearly four years since Sons of Anarchy wrapped its seventh and final season, but now show creator Kurt Sutter is ready to dive back into the world of motorcycle clubs and gang member politics with the spinoff series Mayans MC. As many SOA fans know, the Mayans were a rival group of the Sons before eventually becoming allies, which may leave some viewers wondering if these two fictional worlds are bound to collide in the new series. So, how is Mayans MC connected to Sons of Anarchy and will this be a constant theme throughout the season?

Like most spinoffs, Mayans MC will undoubtedly want to stand on its own two feet and not rely too heavily on its predecessor in order to be successful. It deserves to be its own entity within this fictitious motorcycle world. However, that doesn't mean there won't be definite nods to Sons of Anarchy from time to time.

For example, while Mayans MC will primarily center around brand new characters, there is one familiar face that can be seen popping up from time to time: Emilio Rivera’s character, Marcus Alvarez, who ended up being a consistent presence on SOA for several years as part of the Mayan crew.

For now, Rivera serves as the only outright connection to the Sons series, but that could change over time. Sutter recently spoke on the matter during a panel at the ATX Television Festival, as reported by IndieWire, and when asked if Alvarez would be the only character fans can expect to see in the spinoff, Sutter responded saying, “Not necessarily.” He added:

“Here’s all I can say: My job in this series, if we’re blessed enough to continue, is to transition from the mythology myself and a bunch of talented people spent creating […] and balance that with a show that’s original and different and doesn’t feel like the Latino version of Sons of Anarchy. It’s my job to handle that balance so Mayans can become whatever it’s meant to become.”

Naturally, Mayans MC will also contain a bunch of the same themes that existed within the SOA realm: loyalty, family, love, betrayal. And the young star of the series, Ezekiel “EZ” Reyes (played by J. D. Pardo), is the tough but heroic equivalent of Sons’ Jax Teller, so there are definite parallels that can be found throughout the plot. But if you're wondering if there's ever a chance Jax and EZ could ever cross paths, that's sadly never going to happen.

During the same ATX panel, Sutter got more specific about where Mayans MC falls into the SOA timeline. “It’s present day — in the magical time we live in. […] It’s a post-Jax Teller world,” he said. “If we’re playing real-time, it’s about three years ago [meaning the year 2015]. We talk a little bit about the ramifications of that final day of Jax. […] It changed Northern California and trickled down.”

Considering the bloodbath that Sons left in its wake by the end of the series finale, the list of possible characters who could show up is rather short, but not outright impossible. Interested viewers will just have to keep watching to see how many subtle (and maybe not-so-subtle) connections they can find within each episode.