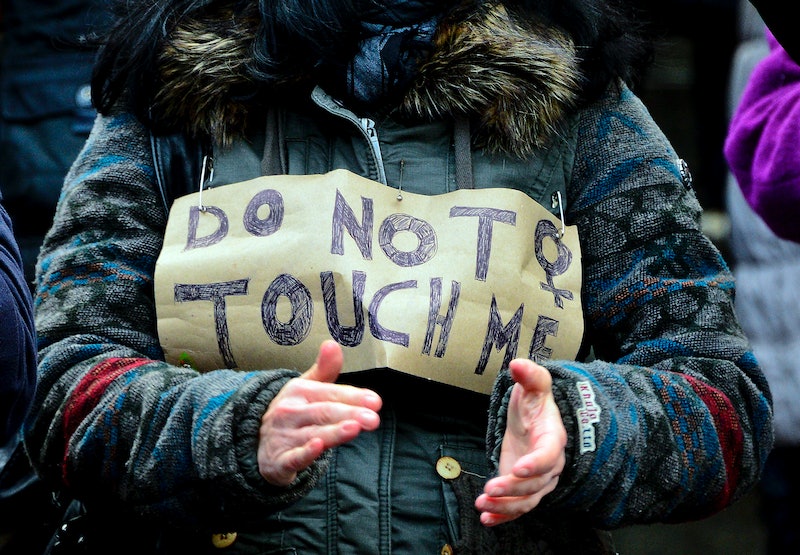 The American Health Care Act passed in the House of Representatives on Thursday, and women across the country have already expressed outrage over many of the bill's gender-discriminatory policies. One of the most controversial aspects of the new health care bill is that rape victims may lose their health care coverage because sexual assault could be considered a pre-existing condition that would allow insurance providers to raise premiums. If this seems completely unethical to you and you're wondering why rape is being described as a "pre-existing condition", the answer to this question is no less infuriating.

Before President Obama enacted the Affordable Health Care Act in 2010, it was actually, shockingly, perfectly legal for insurance companies to essentially discriminate against people with pre-existing conditions, like cancer or diabetes. Back then, if insurance companies knew that they would likely accumulate high costs to pay for their enrollees' treatments, they would shift some of those costs onto the consumer. This sometimes caused patients with pre-existing conditions to be "priced out" of coverage because they couldn't afford it, or were denied coverage altogether.

In 2010, this policy was applied to a rape survivor, who took anti-HIV medication following her assault to prevent her from contracting the disease. When she lost her insurance coverage months later and tried to find a new provider, no one would insure her because the medication on her health records qualified her as a person with a pre-existing condition.

In this instance, it wasn't necessarily the woman's assault that kept her from receiving insurance, but rather the treatment she received as a result of it. In general, HIV-positive individuals, pre-Obamacare, were considered to have pre-existing conditions and denied coverage. Although insurance companies have no way of knowing whether or not a patient has been assaulted, they do have access to patients' medical records, and used to determine premiums based on them.

Now that the AHCA plans to allow states to opt-out of the Obamacare regulations that prevent companies from denying, or raising the premiums, for patients with pre-existing conditions, survivors of sexual assault could face an extremely dangerous situation: refuse to report their assault and potentially face health consequences, or report the assault but risk losing their insurance coverage.

According to the Rape, Abuse, and Incest National Network, one in six women will be the victim of an attempted rape in their lifetimes, and as many as 66 percent of instances of sexual violence go unreported. Under the AHCA, the number of unreported rapes could very well increase, which could threaten the livelihoods and well-being of millions of women across the country.