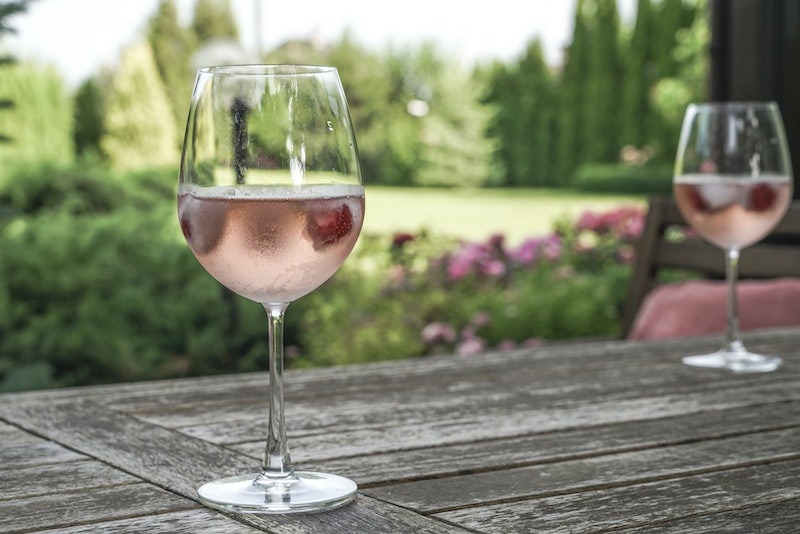 Feelin' yourself while you sip your rosé all day? Same. There's no shame in bringing along some pink wine to happy hour, especially since June 10 is National Rosé Day, aka the best day of the year. But, do you know how rosé is made? Most people think it's red and white wine mixed together, but that's pretty uncommon. (Turns out, this method is actually illegal in France, according to Jen Wall, winemaker at Barefoot Wine & Bubbly.)

Wall says that there are three different ways that rosé gets its insta-worthy pink hue: skin contact, saignée, and blending. They're all different, which means they end up producing different colored rosés. Vinebox's sommelier Tyler Kennedy tells Bustle in an email that one of the biggest misconceptions about rosé wine is that light-colored ones are always better. Rather than looking only for color, Kennedy says that he looks for fruity notes, acidity, terrior, and enjoyability in a rosé. "The last one is important," Kennedy says. "If you don't enjoy it, find something new."

The good news is that there are hundreds of options out there, and there's no time like the present to taste some delicious pink wine. Here's more info on the three different methods of rosé-making, so you can play wine expert the next time you go to a rooftop happy hour. That's the dream, isn't it?

Red grape skins are responsible for coloring the pink drink, Wall says. The winemakers turn the white insides of the grapes into juice and then add the red skins. Wall says that the skins remain in contact with the juice for one to three days depending on how much color is desired. The longer the skins are with the juice, the darker the color will be.

Think of it like a cup of tea. The longer you let the tea bag steep in the water, the darker the water becomes. It's the same deal with rosé. The limited grape skin contact also affects the taste. It doesn't absorb the tannic taste as much as red vino does, which explains why rosés are lighter and crisper than red ones.

Once the desired color is achieved, the skins are removed and the mixture is fermented into wine.

This technique is actually used to make a more concentrated red wine, Kennedy says. But here's the twist: the by-product of this red wine is what makes rosé. Winemakers add red skins to the white juice but then quickly remove some of the mixture in order to make a stronger red wine. The pinkish mixture that has been removed is then fermented to produce the rosé so many millennials love.

Kennedy isn't a fan of this method, because he says it cheats the wine of its potential. By removing the pink juice from the grape skins so early, he says winemakers are "capping its mouthfeel, texture and flavor range early on in it's maceration." He also says these kinds of rosé are typically sold for cheaper prices or blended into large production labels.

Kennedy and Wall both note that mixing red wine and white wine together is the least common way to create a rosy wine. While it's prohibited in France, Wall says that it's legal in California for winemakers to do this. "It's as simple as blending a still white wine with five to 20 percent of what's known as Champagne red wine, or red wine that has been vinified to be less tannic," Kennedy says. "Ratios are determined by winemaker and vary by disgorgement and vintage to maintain consistency." It's a good thing this is still allowed, because I've definitely done this a few times. Desperate times call for desperate measures.

As if you needed another reason to love pink wine, Wall says that the great thing about rosé wine is that it is best enjoyed within 12 months of bottling. This means you generally don't have to pay big bucks to get a nice one. Kennedy even says that spending anywhere from $15 to $30 will land you a very delicious rosé. For those of you balling on a budget, Kennedy tells me that rosé wines are sold for as little as $3.99. Bless.

Now that you're an expert on rosé, you can drop some knowledge on your friends on Friday in honor of National Rosé Day. Cheers to that.