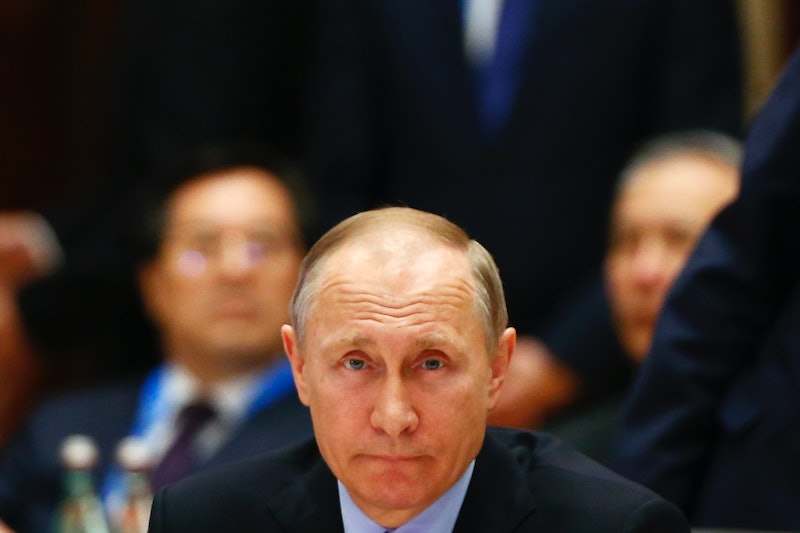 Back on the campaign trail, Donald Trump criticized then-President Obama for not working with Russia to defeat ISIS. But the idea of working with the country militarily — even fighting a terrorist organization — worried many on Capitol Hill. Now, it seems Trump is willing to fully cooperate, even in spite of what national security officials say about the matter. A story in the Washington Post explains how Trump shared ally secrets about ISIS with the Russian foreign minister, a big no-no. But what is Russia's ISIS plan? Is it really so bad that they know the classified information?

Russia is dedicated to defeating ISIS also, but the problem is that the country's other priorities in the Syrian civil war often conflict with defeating the terrorist group. While the United States has backed moderate Syrian rebels, the Kremlin is dead-set on preserving President Bashar al-Assad's control over the country, and sometimes that means targeting groups who fight ISIS. Russia has even announced bombing campaigns against terrorist groups and then gone on to target enemies of ISIS.

More than that, Russian tactics often differ from American ones in the fight against terror. In February, Molly McKew argued in Politico that Putin, the Russian military, and security services might not make the best partner in the war on terror. "There is only one rule in Vladimir Putin's counterterrorism tactics: anything done in the service of defeating 'extremism' is justified," McKew writes, going on to argue that there is more collateral damage when fighting terror this way.

So Russia's plan puts keeping Assad in power as a priority over defeating ISIS, and their tactics are heavy-handed. But that still doesn't get to the heart of the dilemma with the release of this intel. The big problem is that it was not collected from American sources, but rather by those of an ally. It was so sensitive that Trump "revealed more information to the Russian ambassador than we have shared with our own allies," according to what one official told the Washington Post.

This doesn't mean that Russia will use the information to the detriment of the United States, or the ally. But it breaks all sorts of protocol in a way that could cause America's allies to withhold information, for fear that the country, particularly the president, cannot be trusted. That wouldn't be good for the fight against terror.

Take the information that Trump shared with the Russians. It has to do with the possible ISIS plot to place bombs in laptops on commercial airliners. That intelligence likely led to the banning of laptops from the cabin on flights headed to the United States from a number of airports in the Middle East and North Africa airports. It raises the possibility of allies being wary of sharing such information, which means that we would be less inclined to take preventative measures.

That could be a real problem, and it should worry everyone. Russia might be fighting ISIS in its own way, but Trump's inability to keep classified information classified was a huge mistake.