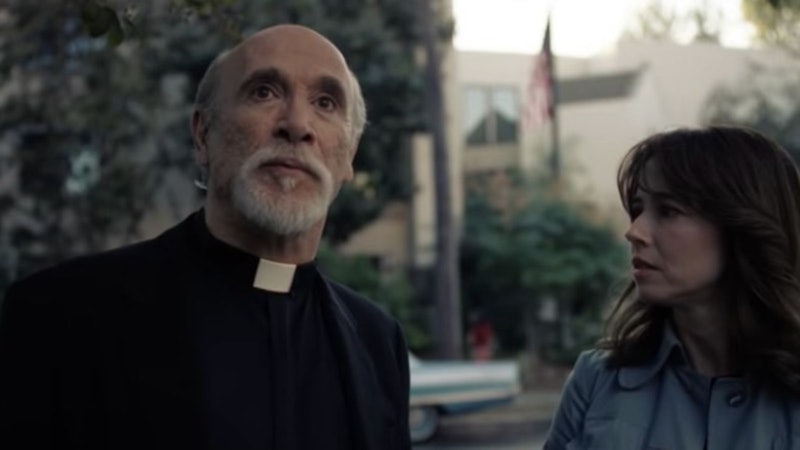 When the trailer for the new horror film The Curse of La Llorona was released, fans couldn't help but notice a familiar face. Tony Amendola pops up as a priest character, something not so unlike his role as Father Perez in Annabelle. The 2014 film is a part of The Conjuring universe, which immediately had audiences wondering if there was indeed a connection between this latest film from producer James Wan, who also directed the first two Conjuring films. So how exactly is The Curse of La Llorona connected to The Conjuring?

In an interview with AMC, The Curse of La Llorona director Michael Chaves kept coy. "People have speculated about whether this is part of The Conjuring universe," he said. "I think we’ve created a great mystery and some questions that have been brought up and discussed. There might be an answer to that within the film itself."

Chaves is also directing The Conjuring 3, which furthers the idea that The Curse of La Llorona is indeed connected to that series. As Cinema Blend noted, the timeline fits. Annabelle was set in 1967, and Father Perez played a major role in helping the central family fight the demon doll. Although his body was taken over, he never died on screen. The Conjuring followed, set in 1971, with The Conjuring 2 in 1976/1977. The Curse of La Llorona, based in the early-to-mid '70s, fits snugly in between the two Conjurings and is set in Southern California, just like Annabelle.

After seeing the film at SXSW, Meagan Navarro of Bloody Disgusting wrote about the references to that franchise. Spoilers ahead! Not only does Father Perez appear, but so does Annabelle, as he speaks about his experience with the doll. It's a brief moment, but it confirms the Conjuring connection audiences have been speculating about. His small role in The Curse of La Llorona serves not only as this confirmation, but as a way of helping Anna (Linda Cardellini) find a way to keep her children safe before the ghostly spirit of La Llorona takes them and drowns them as she did with her own. End spoilers.

As far as the primary Conjuring universe is concerned, there's The Conjuring, Annabelle, The Conjuring 2, Annabelle: Creation, and The Nun. Next up will be Annabelle Comes Home June 28, as the official Twitter announced mid-March. Chaves is already working on The Conjuring 3, telling AMC that during the time of their interview, he was preparing to go into location scouting in Atlanta.

"I can’t say much, but I can say that it puts the Warrens up against an adversary that they have never faced before," he told AMC. "They are absolutely pushed to their limits. It is still very much a Conjuring film, but it really pushes the boundaries." Speaking to Entertainment Weekly, Vera Farmiga, who plays Lorraine Warren, called the next movie in the series "massive" and "a doozy." As of right now, The Conjuring 3 is scheduled for release on Sept. 11, 2020.