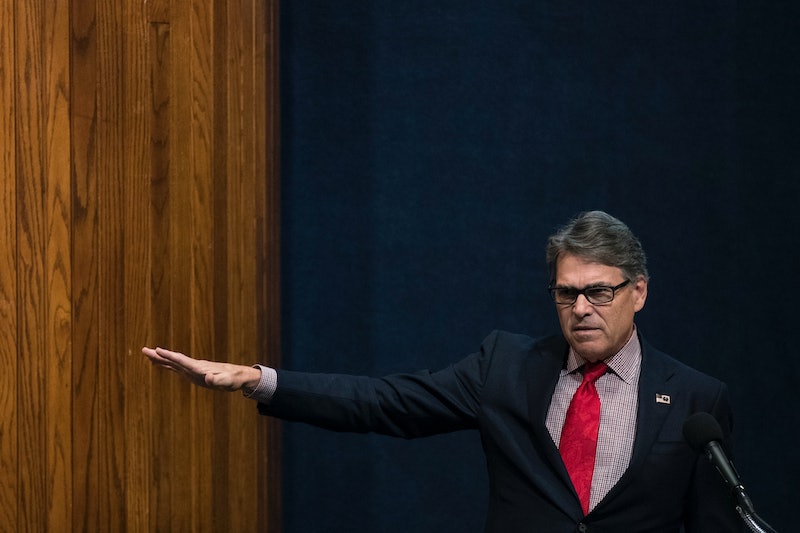 Most high-ranking administration officials will be in attendance at President Trump's State of the Union address at the Capitol on Tuesday — except for Rick Perry, who's this year's "designated survivor." Per tradition, the designated survivor will stay at an undisclosed location instead, and prepare to assume the presidency in case tragedy strikes and everybody else in the presidential line of succession is killed during the speech. The White House doesn't reveal exactly how the designated survivor is chosen — but there are a few things that we do know.

The practice of picking a designated survivor is a consequence of the Presidential Succession Act, which establishes the protocol for determining who becomes commander-in-chief if both the sitting president and their vice president are killed, incapacitated, or otherwise unable to serve. Under the law, the first person in line after the vice president is speaker of the House, followed by president pro tempore of the Senate (which usually means the longest-serving senator in the majority).

In the unlikely event that the president, vice president, speaker of the House and president pro tempore of the Senate are all incapacitated at once, presidential duties fall to a cabinet official. The Presidential Succession Act establishes the order in which cabinet members — beginning with Secretary of State and ending with the Secretary of Homeland Security — assume the office of the presidency. The designated survivor is usually chosen from this lot — although in 2001, Vice President Dick Cheney was the designated survivor for a speech President Bush gave after the attacks of Sept. 11.

According to the Senate Historical Office, the practice of having a designated survivor dates "at least to the early 1960s," when the Cold War was in full swing and the prospect of a nuclear attack was a regular concern for Americans. Since 2003, the Senate and House of Representatives have each internally chosen their own "designated survivor," CBS News reports; these are the lawmakers who will assume the roles of Senate Majority Leader and Speaker of the House, respectively, in case something catastrophic happens at a speech to a joint session of Congress.