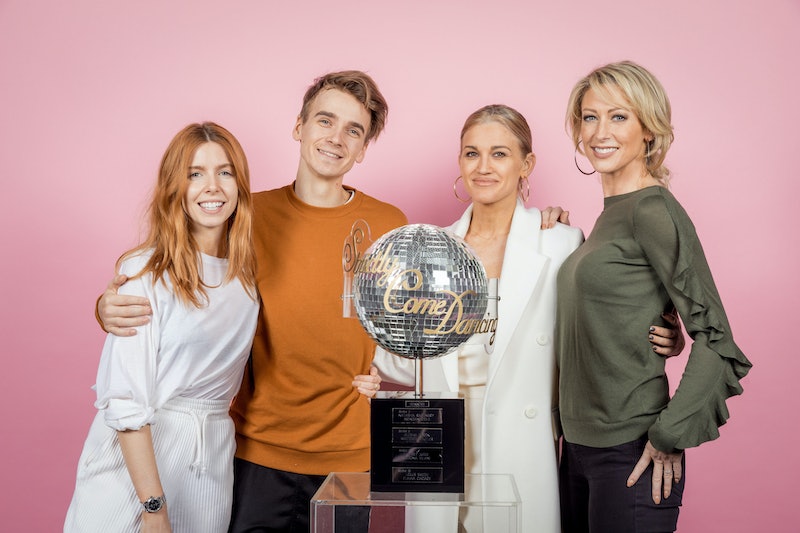 It's finally here, Strictly fans. In a matter of hours a new champion will be crowned, and a new couple will lift the glitterball trophy. Stacey Dooley and Kevin Clifton, Faye Tozer and Giovanni Pernice, Joe Sugg and Dianne Buswell, and Ashley Roberts and Pasha Kovalev all wait anxiously in the wings — but how is the Strictly Come Dancing final judged? Before the celebrities take to the dancefloor, here's everything you need to know, from the significance of the judges' scores to the impact of the public vote and everything in between.

By now, you know the drill: on a standard Strictly show, both the public vote and the judges' scores ultimately determine which celebrity tops the leaderboard — and which two must face the dance off. But as the Radio Times reports, that's not the case in the final. While the judges will continue to assess each of the celebrities' three dances (yes, three whole dances), their scores will only serve as guidance. Ultimately, the Strictly champion will be decided by the viewers' vote alone. There's no Sunday night results show, either; instead, the winner will be announced tonight.

So which three dances will the final couples perform? They'll dance two of their existing routines: one chosen by the judges, and one chosen by the couples themselves. Then there's the showdance, a pull out all the stops, maximum drama number.

While the BBC's keeping the couples' favourite routines under wraps, they have announced the other two dances each pair will perform, as the Radio Times reports. Roberts and Kovalev will revisit their salsa to "(I've Had The) Time of My Life" by Bill Medley and Jennifer Warnes, and perform a showdance to Birdy's "Keeping Your Head Up." Tozer and Pernice will dust off their Viennese waltz to Seal's "It's a Man's World," while their showdance will be to theatre classic "Lullaby of Broadway."

Sugg and Buswell will dance their paso doble to Bastille's "Pompeii," and perform a showdance to "I Bet You Look Good on the Dancefloor" by Arctic Monkeys. And Dooley and Clifton will bring back their foxtrot to Jeff Beck's "High Ho Silver Lining," while their showdance will be to Jessica Mauboy's "Land of a Thousand Dances."

Now, about that public vote: it was the subject of some controversy this week, when fans of Joe Sugg claimed to have found a way to vote from outside the UK, as Digital Spy reports. That's no small matter: given Sugg's massive international fanbase, the existence of a voting "loophole" could majorly sway the results in his favour. (Although as Digital Spy points out, it could also benefit Ashley Roberts, who has a significant amount of fans in her home country, the U.S.)

But fret not, voting sticklers: the BBC has strongly denied that any such loophole exists. "We regularly make updates to our technology to help prevent access to voting via the BBC website from outside the UK which breaks our voting terms and conditions," a spokesperson told Digital Spy. "Our voting platforms are robust and we have stringent procedures in place as well as independent verification. Online voting requires a BBC log in and is freely available to users across the UK without a VPN."

So there you have it, Strictly lovers: everything you need to know ahead of tonight's grand final. Just one urgent question remains: what are we supposed to do with our Saturday evenings now?