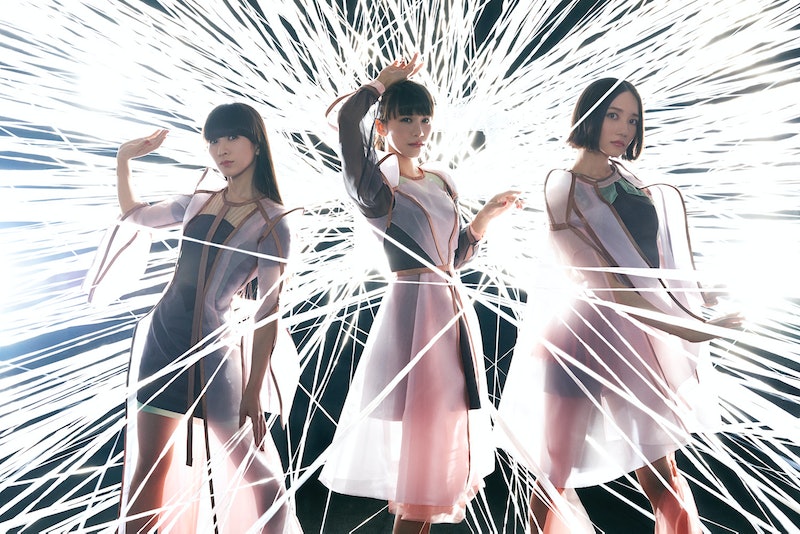 This Coachella, the girl group Perfume is making history by becoming the first J-pop girl group to perform at the event, taking the stage on both Apr. 14 and 21. But besides carving space for J-pop at the biggest music festival in the U.S., Perfume — made up of Ayano Omoto (Nocchi), who took over after Yuka Kawashima, a.k.a. Kawayuka, left; Yuka Kashino (Kashiyuka); and Ayaka Nishiwaki (A-Chan) — have broken barriers in another huge way: they’re one of the longest-lasting J-pop groups ever, having formed in 2000. Over the last two decades, the trio have released seven No.1 albums on the Japanese Billboard charts, including 2018's Future Pop, but the 2019 Coachella performance marks an uncharted milestone.

“Just being invited to play there is a blessing, but because we've never been there, even as an audience, I'm a little nervous. I don't know what to expect,” says Kashiyuka to Bustle, speaking alongside the other members via a translator on Skype recently.

Over the years, the trio (all age 30) have played various festivals in the U.S., including SXSW, but Coachella is a major deal. While Perfume isn't the first Japanese act to perform at the fest (rock bands X Japan and Otoboke Beaver came in 2018), there hasn't yet been ever a Japanese girl group there, and despite artists like Kyary Pamyu Pamyu and BABYMETAL amassing significant U.S. fanbases, they haven't been invited to perform, either. Taking on the festival will allow Perfume, and J-pop overall, to reach a wider audience than ever.

“It's such a big deal," says A-Chan. "I knew about it, but once the performance was announced, there were so many people from the industry wanting to come see the show at Coachella this year. So it was more than we expected."

When they've toured the U.S. in the past, the group has noticed some stark differences between their American fanbase and the one back home. “U.S. fans are more honest about their feelings and emotions towards Perfume,” explains Nocchi. “Japanese fans are all about teamwork and connection... but for American fans, they react to the songs that they like, and they don't like the songs that they don't. So it's more about individual feelings.”

Besides being more vocal about which songs they identify with, one big difference with American fans that stands out to A-Chan is the ingenious cosplay they wear to their shows. In Japan, she says, female fans will make exact replicas of the band's outfits, but in the U.S., Perfume cosplay isn't limited to one gender, and goes beyond making copies of the members' wardrobes.

"One of the guys actually did a copy of the LED dresses we wore for [the video for] “Spring of Life”," recalls A-Chan, referring to the song off their 2013 album Level3. "He actually made it into a very deep v-neck outfit that showed his muscles... and he had his own switch that he could turn the lights on and off. Everyone's enjoying the fashion in a unique way.”

One of the reasons Perfume has resonated with fans so much over the past 19 years is that they’ve always remained true to themselves. They've never fit the Kawaii category — a cutesy, ultra-feminine version of pop — that other J-pop stars and groups like Kyary Pamyu Pamyu or AKB48 are known for. Instead, they've created their own style of music, combining technopop with bubblegum pop. “We weren't intentionally doing that, being a pioneer of the genre,” notes A-chan. “It's just the continuation of what we've been doing, and it just kind of became our own genre.”

All of the group's music is written by producer, composer, and songwriter Yasutaka Nakata. Each album process is collaborative to an extent, with the women approving his ideas on the direction the records should take, but Nakata ultimately decides where to steer Perfume’s sound. According to A-Chan, that's unlikely to change anytime soon.

“I proposed to Nakata that I wanted to try writing songs, but it seems like Nakata already has a finished product image when he starts writing a song,” explains A-Chan. “Because we’re his big fans, we don’t want to push [writing music] too far. As long as he doesn't want people to be involved, I just want to leave it that way.”

For now, the group is focused on continuing their success and reaching new fans during their 2019 tour. “It's not just the three of us — we have a great team behind us, and it's a group effort,” says Nocchi. “So when we bring Perfume out internationally, I represent the whole team in bringing them to the world as well, which is a blessing.”

With their Coachella debut, Perfume is playing a huge role in turning J-pop mainstream, and perhaps paving the way for other J-pop acts to follow in the group's footsteps.