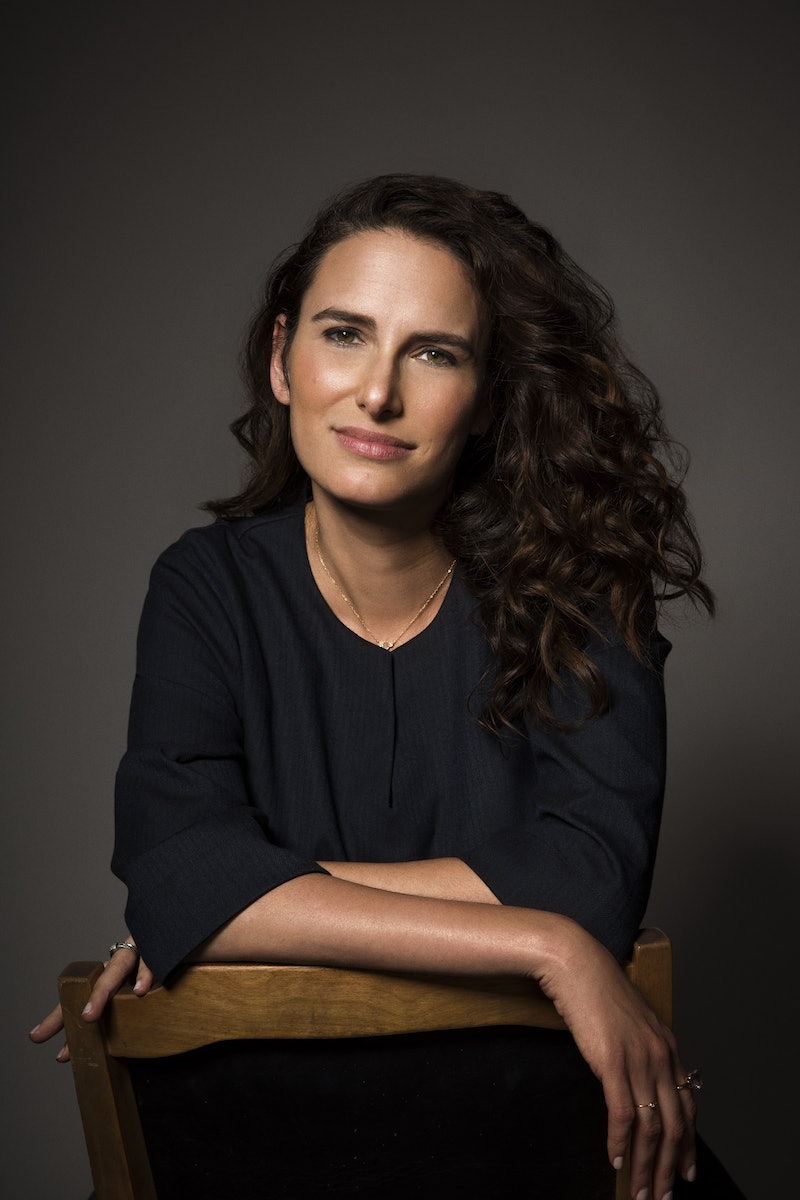 From a tomboy childhood to breast pumping at the Emmys, the stories in Jessi Klein’s essay collection, You’ll Grow Out of It, are the perfect blend of hilarity and heart. First published last summer, and re-released in paperback by Grand Central Publishing this month, the collection was a People’s Best Book of the Year, a New York Times Notable Book of 2016, and a New York Times bestseller. Not surprising, since Klein will leave you in tears, laughing.

Beginning with the comedy writer’s early days as a self-described “Pippi Longstocking-esque tomboy," the collection of essays takes readers through Klein’s first forays into the territory of traditional womanhood (lingerie, Calgon bath products, hair-brushing) and on her journey towards carving out her own space in a landscape of bad breakups, wedding dress protocol, the allure of Anthropologie, and the irresistibility of The Bachelor. She also writes seriously about ageism in Hollywood, infertility and pregnancy, finding her voice in comedy, and more.

The Emmy- and Peabody Award-winning humorist and head writer and executive producer of Inside Amy Schumer, caught up with Bustle just as the paperback edition of You’ll Grow Out of It was landing on bookstore shelves.

“I’ve always really liked comedy; trying to be funny and trying to make people laugh,” Klein tells Bustle. “I think at a certain point — maybe once I hit my tweens and it was clear I wasn’t going to be leaning on my looks — I definitely felt like: well, I have a lot more confidence in my ability to make people laugh than in my ability to turn heads in the hall of my junior high school.”

Klein’s humor reads both authentic and relatable — taking you from a tepid pool of bathwater (to Klein, there has “always been something vaguely miserable about bathing”) to a sweaty, tangled elastic mess in the dressing room of a Greenwich Village lingerie store (the “thong industrial complex.”) Most of us have been there, by varying degrees

“It took so much effort,” says Klein, of writing You’ll Grow Out of It. “So, so much effort — and for me a lot of food, and wine, and tears went into trying to write a book. Or at least this book, they did.”

Is it weird to cry over writing humor, I wonder?

“I don’t think it’s weird to cry at any time. I think anything could produce sobbing if the moment is right,” the comedy writer says. “Just lean into it. I wanted the book to be funny, but also really vulnerable and personal — not like I was dropping tears into my laptop in the moment of writing. But there were parts of the book that I think were more poignant or serious than others, and I was definitely delving into some things in my personal history and life that are not hilarious. Breakups that were really transformative and painful, the essay about trying to get pregnant — that was one of the darkest chapters in my recent life. But I’m really glad that I was able to put them out there for other people to connect to.”

Throughout the essay collection, Klein seems to take everything in stride — ill-advised relationships, wedding dress shopping, struggling to get pregnant. There are moments of embarrassment and confusion, moments of sadness and pain, but through it all Klein never seems to lose her sense of humor. I ask if she’s aware of her humor in the heat of a particularly uncomfortable moment, or if that part comes later, with distance.

“I think it depends,” she says, after some thought. “I’m so embarrassed to say this because it really couldn’t be stupider — I definitely had moments of crying [over her wedding dress, of which Klein tried on a hundred] but in the moment, I was also thinking: I can’t believe I’m crying over this nonsense. I’m a feminist. How am I crying over my wedding dress? This is embarrassing. And then that made my cry harder.”

But even through the more difficult moments Klein writes about: a significant breakup, fertility treatments, the writer says part of her mind was always vaguely aware of the absurd. “There were certainly moments during both of those times that did not feel funny at all, and I wasn’t really sure if they would. But I would also say that even in the darker moments — like in trying to get pregnant — there really are so many ridiculous things that you’re doing. I did have moments where I was like: I know this will become something funny, at some point.”

Klein, who now has a two-year-old son, writes unabashedly (and in all-caps) about her experiences with pregnancy and childbirth. One essay from You’ll Grow Out of It, titled Get the Epidural, was published in the New York Times last year. It begins with Klein and her husband sitting in a weekend-long childbirth education course, watching their instructor simulate a contraction. “I don’t think I want to do that,” Klein blurts out in class, much to the shock and chagrin of her fellow soon-to-be mothers. The essay is hilarious, illumining, thoughtful, and reads like a call-to-action for any woman struggling to suss out her own truth from the noisy, mothering fray.

“If there was one chapter I wanted to go out into the world, it was that one, because I felt that this could really help people; and I was really happy that people told me it was helpful to them,” Klein says. “But I think other people may have also misunderstood it. Birth and pregnancy are really hard, and I’m not judging anyone for any choices. I think I was just trying to say: I really wouldn’t want anyone to try to have this ‘natural birth’ because of a sense of being a failure if they don’t do it that way. I think so many women feel pressured to [birth] a certain way, in ways that are really insidious. If a woman wants to give birth in a tub of quinoa at Whole Foods, there’s nothing wrong with that, if it’s not harming anybody.”

I ask if motherhood has changed her sense of humor, at all.

“I wouldn’t say that motherhood has changed my sense of humor, but I would say that it’s definitely changed a lot about my life,” Klein says. “It’s changed the flow of my day and I think the things I want to put energy into. I will say — this is just my impression — I’ve become more aware of how writing about experiences of motherhood is viewed, and it can be extremely condescending and diminishing. There are all these spaces where women write about motherhood, and they’re all referred to as ‘mommy blogs.’ In a way, it feels like: ‘this is not important, this is just for moms.’ Ernest Hemingway wasn’t told he was writing a war blog. In some ways motherhood is the most important job in the world, because it’s producing the people. It produces the people. And the fact that writing about it is seen as so trivial is a really big clue to how much misogyny there still is in the world.”

And speaking of misogyny, it’s worth noting that Klein is a feminist woman, working in comedy, during a Trump presidency. In You’ll Grow Out of It, she writes about how being funny, in part, involves looking for holes in other people’s beliefs. And the book does poke holes — in a wholly refreshing way — in many of the overarching assumptions about how women are supposed to exist in the world.

“Being a feminist isn’t a stance I’m picking and choosing,” Klein says. “I just am that, and I feel like no matter what I do or what I say it’s coming from a feminist place. It’s like breathing air. I never want to be mean. I really don’t believe in being mean. But I do believe in standing up for what you believe.”

While You’ll Grow Out of It is not overtly political, it does tackle a number of personal issues that feel highly politicized right now: how women appear in the world, our bodies, our sexual decisions, the ways we do or do not choose to mother. I wonder if Klein’s position as a visible, feminist figure in the realm of comedy, comes with an added responsibility these days.

And maybe comedy — with its accessibility, relatability, and invitation to continually find humor in the absurdity of life — can help.

“The only way you can continue to move forward is by doing your work and continuing to be as amazing as you are,” Klein says. “I think always if you can make somebody laugh, you’re opening up a little space to soften people.”

More like this
Allie Rowbottom Will Have Her Feminism With A Side of Botox
By Samantha Leach
Robert Downey Jr.’s New Film Is A Tender Story of Fatherhood & Forgiveness
By El Hunt
How To Stream 'She Said' In The UK
By Maxine Harrison
Steve Banerjee's Wife Irene Sold The Chippendales Brand Prior To Her Death
By Brad Witter
Get Even More From Bustle — Sign Up For The Newsletter