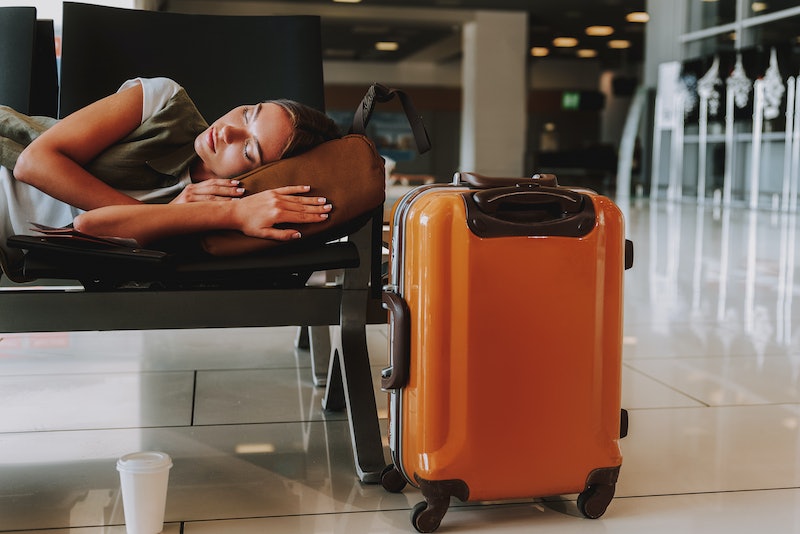 Taking a holiday can be a magnificent experience — new sites, new friends, delicious foods — but it can also involve a serious vibe-killer: jet lag. This phenomenon, experts tell Bustle, has a serious effect on your neurochemistry, or the various hormones and substances that circulate in your brain at all times of the day and night. However, jet lag is a very modern condition, because it only dates back to the invention of machines fast enough to transport us over time zones without giving us time to adjust. That new status means there's still a lot we don't know about what jet lag does to the brain.

"Jet lag is simply a disconnect between circadian rhythms and the external world," Dr. Carl W. Bazil, MD, PhD, the director of the Division of Epilepsy and Sleep at the Columbia University College of Physicians and Surgeons, tells Bustle. Circadian rhythms are the natural 24-hour cycle of the cells in your body, from the brain to the liver and heart. Research has found that there are a variety of clocks in organs throughout the body, with the master clock in the brain, all telling the body roughly what time it is and what it should be doing.

The biggest job of the circadian rhythms is figuring out when to wake up and when to sleep — and if you have jet lag, your internal clocks will be out of sync with what's happening around you. It's not necessarily a problem, says Bazil: "The brain and body are behaving completely normally, and if you travel to Japan but stay on New York time you (mainly) will not suffer jet lag."

It actually takes a journey of a certain length or longer to cause the effects we know as jet lag. Dr. David Earnest, PhD, a professor at the Texas A&M College of Medicine’s Department of Neuroscience & Experimental Therapeutics, tells Bustle that jet lag's effects on cognitive function become noticeable when you travel over three or more time zones. "If you've ever gone on a transcontinental trip and crossed at least three or four time zones, you'll notice that your cognitive function is not very sharp when you get to your destination," he says. The reason behind that is jet lag's disruption of cognitive behavior, but what actually happens in the brain when you're jet lagged is a bit more complicated.

Jet lag is known to be bad for your brain function. "If you're traveling across eight hours of time zone difference, and you're involved in an important administrative decision at the new location, your brain is not in a good position to be making that decision," says Dr. Earnest. Studies have shown that jet lag impairs decision-making, memory, learning and mood disturbances, which generally resolve after people adjust to the time zones of their new location.

Some of this, say experts, can be traced back to general discombobulation at your new location. "The peak in human cognitive performance occurs sometime early in the morning," says Dr. Earnest; if you're now in a place when morning is a full eight hours later than it normally is, your brain isn't going to be at its best. However, to understand cognitive issues with jet lag, you have to look at the brain, and particularly one hormone: melatonin.

Melatonin is a key part of our circadian rhythms, because it makes us sleepy — and is normally released by the brain to help us drop off easily. "Melatonin is normally released in the brain with levels highest during the night, so when you're changing your sleep-wake significantly, melatonin levels released by the brain try to adjust to the new cycle," explains Dr. Earnest. When you're jet lagged, your brain is releasing melatonin at times and driving the body to nod off at inconvenient times. This, Dr. Bazil tells Bustle, produces two issues in the brain: "Sleep drive remains higher during the daytime hours resulting in increased drowsiness, and waking drive can persist during the time the person is trying to sleep."

It's not just about traveling either. The same disruption in cognitive function, Dr. Bazil tells Bustle, has also been observed in shift workers. "The brain can power through this to some extent — we have all needed to stay up late — but especially if it persists and results in sleep deprivation, it will be harder to function optimally," he says. If you're living a sleep-wake cycle drastically out of step with your environment, your cognitive function will likely suffer.

Beyond melatonin, there's a lot we still don't know about the neurochemistry of jet lag. "In animal models, we know that other neurotransmitters such as glutamate and GABA are changed when the sleep-wake cycle is shifted," says Dr. Earnest. However, we don't know if this is the case in humans yet. It's often hard to test exactly how things like jet lag change neurotransmitters in human brains, because they're tricky to measure; only some of them, like melatonin, show up in our blood. Neurologists, explains Dr. Earnest, sometimes resort to taking their own blood samples during jet travel and documenting the changes in order to see what might be happening in the brain.

The neurochemistry of jet lag still contains many unanswered questions. "There's quite a lot we don't understand yet," says Dr. Earnest. In the future we might know a bit more about how jet lag shifts the way our brains work — and also understand how it might affect our brain chemistry over the long term.

More like this
The 11 Benefits Of Aerial Yoga, According To Trainers
By Carolyn Steber
After 24 Years Of Disney Vacations, I Finally Took A Trip On My Own
By Charlie Mock
11 Exercises For Dowager's Hump That'll Help Your Neck Posture
By Carolyn Steber
Kourtney Kardashian’s Wellness Guru Shares Her #1 Tip For Better Health
By Taylor Jean Stephan
Get Even More From Bustle — Sign Up For The Newsletter
From hair trends to relationship advice, our daily newsletter has everything you need to sound like a person who’s on TikTok, even if you aren’t.