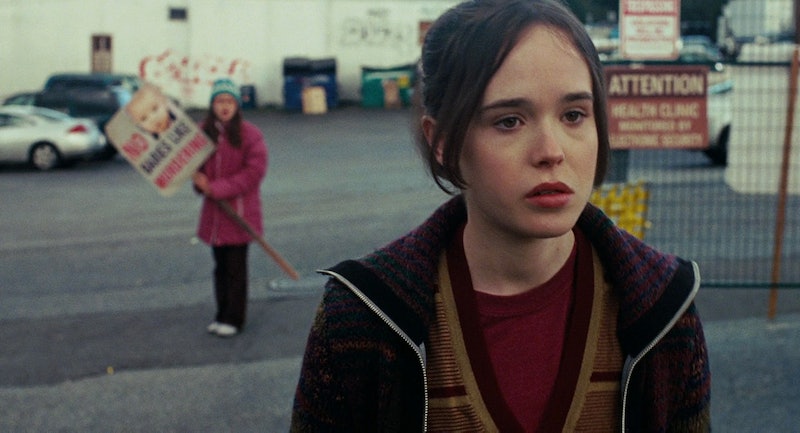 From the instant audiences are introduced to the movie's lead character, it's clear that Juno's portrayal of teenagers is a little different than most. Swigging from an oversized carton of Sunny D and arguing with a drug store cashier about her third pregnancy test of the day, Juno MacGuff is forthright and confident, but also willfully obnoxious. As the movie progresses, however, we're slowly able to determine that there's more to this 16 year-old girl beyond her overly-hip witticisms and propensity to annoy. Juno offers a complex portrayal of a teenage girl caught between the carefree naivety of childhood and the hellish responsibilities of her burgeoning adulthood. In dealing with her surprise pregnancy, she's forced to navigate a mature road with a childish compass, and she chooses to make that journey almost completely on her own.

"In Juno, the movie is not about pregnancy," screenwriter Diablo Cody once told The Writers Digest in 2008, "pregnancy is the location." As a result, we see the lead character on a journey to that location, and it's one that's less about teen pregnancy than it is about her encountering how awkward, painful, and difficult the process of becoming an adult is. As a result, Juno's character is portrayed as a multifaceted teenager and one who, though immature, is also incredibly smart and self-sufficient. Juno's pregnancy, though it ushers the narrative along, is more of a reflection of the character's own growing up process, offering a timeline within which we witness her childish naivety mature into the responsibility filled wisdom of adulthood. And we see that portrayed in manners rarely offered to female teenage characters in movies.

For instance, when we see Juno's alarmingly cool disclosure of her pregnancy to her best friend Leah, or her inappropriately playful announcement to the baby's father, Paulie, Juno feels like an immature 16 year-old girl. She even makes an appointment for an abortion using an unreliable novelty phone that barely serves it's purpose. Where the character begins to grow, however, is in how she immediately assumes responsibility for her pregnancy from that point onwards and makes smart decisions regarding it that feel right for her. Regardless of whether Juno's treatment of abortion is problematic or not, (she feels pressured to opt out of the procedure by a anti-choice school friend protesting outside the clinic) it's emboldening to see a young female character maintaining autonomy over the life of her child, nonetheless.

It's incredibly inspiring, for instance, to see how Juno already has a well-thought out and researched plan in place for herself, and the baby, by the time she's ready to announce her pregnancy to her parents. The character has the foresight to not only settle upon adoption as a solution for her unwanted child, but to have also actively sought out the parents she wants to raise it and to have figured out how they will cover her medical costs. From the start, her need for self-sufficiency in all aspects of her pregnancy is clear. And though she doesn't want to keep the baby, she does want to maintain control over all dealings concerning it until it's birth.

Juno pointedly tells her parents that she wants nothing from them except for "mercy," regarding the pregnancy, and also rejects an offer from Vanessa (the adoptive mother) of additional financial compensation for the child. Juno seems intent on traversing this journey with as much self-reliance and autonomy as possible, and that includes only accepting the bare minimum of support for it. Her confident, direct approach to making these decisions, including rejecting her step-mom's concern that adoption may be tougher than a 16 year-old girl could possibly fathom, is seriously refreshing to see in a teenage character. And it makes the rest of her character arc all the more compelling for it. Because as we check back in with Juno over the course of three changing seasons, we see her undergo some life-altering changes that aren't merely physical.

Though Juno is experiencing a difficult and major life event, she regardless appears on the surface as though she has it all together. She's organized, taking care of herself, and refusing for her pregnancy to change her life too much, and in those respects she seems fairly mature for her age. But then, as suggested by the twee folk soundtrack that softens every scene with an optimistic sweetness, Juno's naivety and immaturity are still active beneath the surface of that facade. And it's exactly these qualities that lead to events which cause her to have a small meltdown on the side of the freeway towards the end of the movie.

There's the way she pushes Paulie away as a boyfriend, despite his clear interest in her, before getting angry at him for attending prom with the girl she recommended he date. And there's also the way that she rejects her step-mom's assertion that Juno can't be friends with Mark (the baby's immature, adoptive father) because he's a married man with boundaries that she's too young to fully understand. Thankfully, Juno figures out that Mark has crossed those boundaries and isn't deserving of her friendship (or her child), and that she's actually madly in love with Paulie. "I just need to know that it's possible that two people can stay happy together forever," she tells her dad after Mark reveals that he's divorcing Vanessa, sounding like a little girl desperate to know that fairy tales aren't fictional.

But, sadly, they are. In real life, those fairy tale endings often require a lot of work, pain, and heartbreak to acquire. And you could argue that Juno's realization of this fact is the true resolution of the movie, more important than her eventually giving birth. Vanessa takes Juno's baby back home and is a proud, beaming mother. But Juno's true gift to Vanessa is in urging her that she can raise the child alone, and without Mark, just as Juno contended with the pregnancy of the child as a single woman, too. In accepting the challenges of life, and knowing that she can now deal with them herself and on her own terms, Juno discovers her own sense of identity and agency as a young woman. And that's a powerful denouement to see on screen when similar movies might have opted to focus singularly on the birth of the child being the main achievement of the plot. In Juno, that wasn't the case.

"I don't know what kind of girl I am," Juno tells her dad at the start of the movie, when he crushingly comments, "I thought you were the kind of girl who knew when to say when." By the end of the movie we can see exactly what sort of girl she is: She's smart, driven, self-sufficient, and most importantly, capable of dealing with life on her own terms and without apology. And just how many female teen movie characters can you say that about?

More like this
Sandra Bullock, Girlboss Extraordinaire
By Matt Harkins & Viviana Olen
Shocked Fans & Former Co-Stars React To Ray Liotta’s Death At 67
By Grace Wehniainen
Laura Dern Said “Cultural Awareness” Made Her Rethink This 'Jurassic Park' Fact
By Grace Wehniainen
The 'Hocus Pocus' Sequel Finally Has A Release Date & It Makes Total Sense
By Shannon Barbour and Radhika Menon
Get Even More From Bustle — Sign Up For The Newsletter