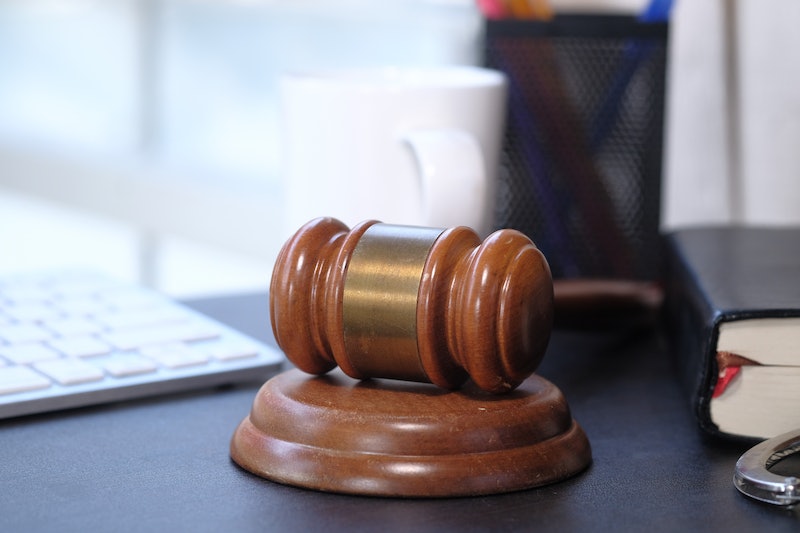 Jury duty is widely thought of as annoying. It requires taking time off work, spending hours in court, and can be boring and tedious. But for many people, it’s not just a nuisance — it can re-traumatize survivors of violent crime. For people who have survived something like sexual assault, getting called for jury duty can be a painful and triggering experience. People serving as jurors on trials for violent crimes are exposed to the most horrific details of those crimes. From intricate testimonies of attacks to blood-soaked pieces of evidence, serving on a jury means taking in all the information in order to come to a responsible and fair verdict. And until you’ve served on one of these cases yourself, it’s rarely possible to predict this outcome of performing your civic duty.

Colby Bruno, senior legal counsel at the Victim Rights Law Center (VRLC), a nonprofit legal aid organization for survivors of sexual assault, tells Bustle that while there aren’t any direct legal protections for survivors who are called for jury duty, there are ways to avoid serving on a trial that might trigger post-traumatic stress.

“The best advice I could ever give to someone is to have support,” Bruno says, noting that self-care and support systems are always important for survivors.

Anyone registered to vote or who has a driver's license can get called for jury duty. After receiving a jury summons in the mail, potential jurors have to go to the court for the judge and lawyers of each side to question them. Only jurors that the court sees as qualified will make it onto the case. People with a conflict of interest, with strong prejudices, or with other distinctions that might influence their ability to fairly judge a defendant won’t be selected. Potential jurors can’t lie to the court at any point, but can inform the judge and lawyers that they might not be able to serve for whatever reason, including being a victim of a similar crime.

By design, most jurors are regular people who may not be used to hearing and seeing the violent details of a criminal case, and may not be emotionally prepared to deal with them. Research shows that even people who are not survivors of crimes can end up with PTSD after serving as jurors on difficult cases. Plus, jurors can’t share any case information outside the court, which means that talking through a difficult jury experience with family or friends can be impossible.

Sezín Koehler, author of Crime Rave and American Monsters, witnessed the murder of a close friend, she wrote in HuffPost. Koehler described how she had to relive the traumatic event over and over, recounting the details to police, legal teams, and the court. Many years later, she wrote, receiving her jury summons instantly opened up those wounds. “The simple piece of paper with a jury summons notice was enough to erase every moment of healing I’ve accomplished since then and now,” Koehler wrote.

Since jury selection is ultimately up to a judge, there’s no guarantee that vocalizing reservations about a case will get a potential juror dismissed. Survivors should be prepared for a difficult process, but Bruno says that giving the court a little information can go a long way.

“Sometimes you have to give a little to get a little,” she says. “We will talk to victims about how to give the smallest amount of general information in order to convey to someone that they can't do something.” The goal, Bruno says, is to make it clear that serving on the case would be difficult for the person, without them having to relive their experience in detail to the court.

Until you’ve served on one of these cases yourself, it’s rarely possible to predict this outcome of performing your civic duty.

“You can go up and you can say, ‘I am a witness to a crime that is similar to the facts that I've heard today and I don't think I can be unbiased in my decision,’” Bruno says. She tells Bustle that, often, this will be enough to be removed from the selection process, so survivors don’t always need to identify themselves as victims. For some, doing so can be triggering in itself. Symptoms of post-traumatic stress disorder (PTSD) can be triggered by many different situations, and each person’s experience is unique. That’s why having a support system to deal with the unexpected is so important, Bruno says.

Currently, most courts don’t proactively offer any specific mental health resources for jurors. In some extreme cases, however, judges have worked to help jurors receive counseling. Jurors serving on federal cases can be eligible to receive free counseling through the federal Employee Assistance Program (EAP), according to the United States Courts website. A judge can extend the juror’s service period beyond the trial’s completion, so that they’re still eligible for these mental health services through EAP even after the case is done. That’s what the federal judge presiding over the Boston Marathon bomber’s trial did for jurors after he was sentenced. For three months after they had finished serving, jurors were able to seek out counseling to handle the trauma experienced watching lawyers delve deep into the aftermath of the bombing. The Atlantic reported that jurors in this case wept during proceedings because the details and evidence brought forth were so gruesome.

Ultimately, for survivors who think their PTSD might be triggered or worsened by serving as a juror, the best bet is to be upfront with the judge. It’s important to note that a judge may ask followup questions, or push for details, especially since dodging jury duty by misleading the court is a crime.

“I think a victim has to be prepared to give information in order to get an accommodation,” Bruno says.

VRLC offers several resources for survivors, including legal advice and letters explaining survivors reason for needing excusal from things like work, school, or even jury duty. Before, during, and after dealing with the legal system, even as a juror, Bruno reiterates that identifying a support system is the best thing a survivor can do for themselves.

“It doesn't matter who it is or what it is,” Bruno says. “It matters that you have the ability to get to seek support immediately when you need it.”