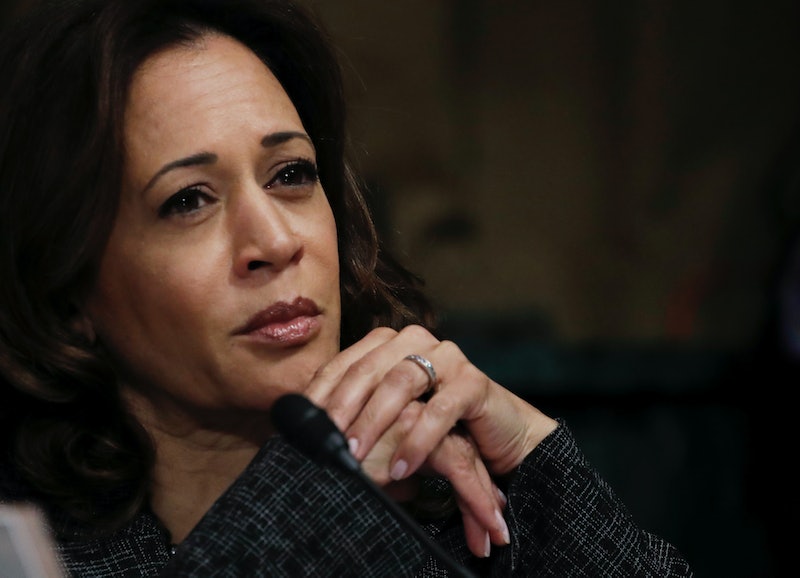 Evidence in sexual assault cases has been sitting untested across the United States for years, but one presidential candidate has a proposal to change that. Sen. Kamala Harris released a rape kit backlog plan Thursday that would commit $1 billion to the issue over four years, drawing upon her previous success in clearing backlogs in California.

Rape kits are sexual assault forensic exams that are generally performed within 72 hours after a sexual assault. A medical professional performs an examination and collects swabs, samples, and other physical evidence that could contain DNA of the attacker. It's estimated that there are hundreds of thousands untested rape kits across the United States, many of them years old.

"The federal government can and should prioritize justice for survivors of sex abuse, assault and rape," Harris said in a statement sent to Bustle, noting that her work cleared 1,300 rape kits during her first year as California attorney general. "We need the same focus at the national level to pursue justice and help hold predators accountable."

As attorney general, Harris and her bureau's Rapid DNA Service Team were awarded the U.S. Department of Justice’s Award for Professional Innovation in Victim Services in 2014 for its efforts to end the rape kit backlog in California. Her office later received a grant to continue expanding the technology across the state. The program automated DNA testing and reduced the processing time from six months to within 20 days, according to a 2015 press release from the Office of the Attorney General.

There are still approximately 13,615 untested rape kits in California, however, according to nonprofit Joyful Heart Foundation's "End The Backlog" program. When Harris' office received the award from the Department of Justice in 2014, the program had been adopted by eight of California's 58 counties, according to the Associated Press, though a year later, her office said it was helping 46 counties with DNA testing of rape kits.

According to her campaign, Harris' plan to end the rape kit backlog nationwide — within her first term as president if she's elected — would require states to carry out four reforms of their current system. To receive funding, states must:

According to RAINN, not every hospital has a trained professional on hand to perform a rape kit when one is needed. And despite the fact that the Violence Against Women Act stipulates that states must pay for forensic sexual assault examinations, sometimes survivors are forced to pay hundreds of dollars for a rape kit because of the way hospitals bill for their services, Reuters reported in 2017.

States have been working on eliminating the backlog bit by bit, recently with monetary help from the district attorney of Manhattan and federal officials. While that assistance could help analyze more than 100,000 untested rape kits, more than 155,000 are estimated to still be sitting in storage.