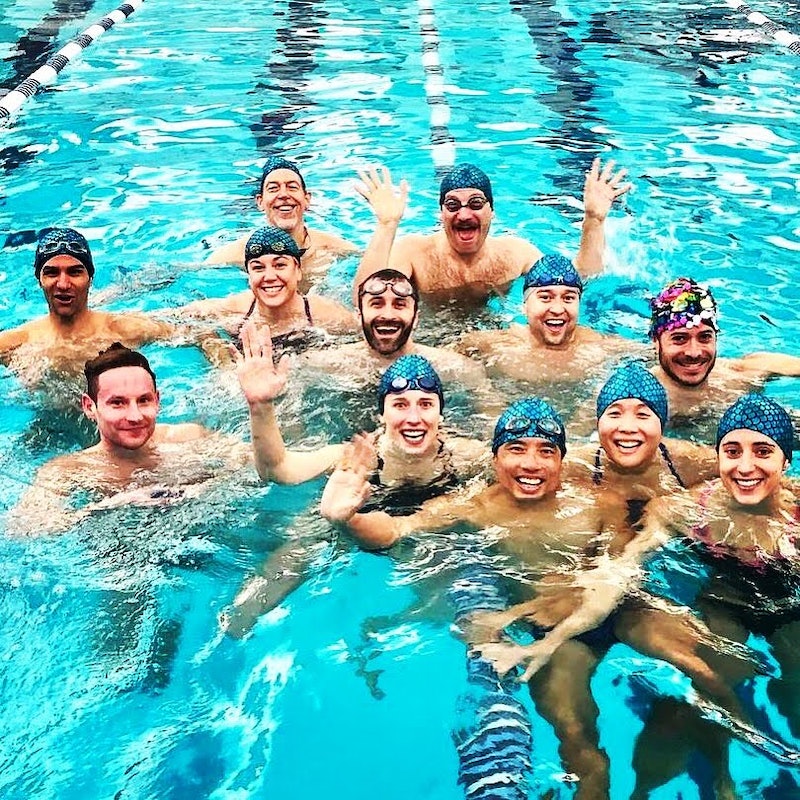 While she had always known she was a lesbian, Kristina Nungaray didn’t fully come out to family and friends until adulthood, only doing so when she moved to New York City in 2014. She gave up swimming and water polo, sports she had found solace in since she was little, because she didn't see LGBTQ-inclusive swim teams or any LGBTQ representation in sports, and she felt “different” than her peers in her small town. It was a search for what she describes as her “tribe” in New York City that eventually led her back to the sport that felt like home.

Nungaray can easily pinpoint how queer representation could have helped her growing up. The Texas-born athlete says it would’ve helped her be more comfortable in her skin and come to terms with her sexuality during those formative years. Seeing that representation would have “perhaps made it easier to own what I already very much knew about myself,” Nungaray tells Bustle.

It was Team New York Aquatics (TNYA), an LGBTQ-inclusive swim team, that reconnected Nungaray with her swimming roots as an adult. Today, just a year after joining the synchronized swimming team, Nungaray says she not only has TNYA to thank for her rediscovery of her love of aquatic sports, but also for the safe space to “own and embrace [her] differences.” Members of TNYA tell Bustle the same is true for them: The inclusivity that the team provides changed their lives for the better.

Team New York Aquatics got its start thanks to Charlie Carson, a swimmer from New York City who participated in the inaugural 1982 Gay Games sports event in San Francisco. The Olympics-style event attracted gay athletes from around the world to compete every four years in numerous sports, from bowling to tennis to aquatics. Carson was inspired by the energy and athleticism of the people he’d met at the Gay Games and vowed to rally more swimmers from New York City to join the next competition.

Eighteen swimmers joined him at the Gay Games in 1986. Carson and his fellow swimmers then decided that a more consistent competition would be ideal. So in 1987, Carson co-founded International Gay & Lesbian Aquatics (IGLA), an international organization meant to promote aquatics in the LGBTQ community that holds championship competitions nearly every year. As the organization was founded during the era of the HIV/AIDS epidemic in the United States, the very existence of out gay men and women in these sports was phenomenal.

"It's like, wow, there’s a whole community of gay swimmers that I didn’t even know existed growing up."

“It’s an amazing feeling knowing that I started an organization that is likely to be around after I’m gone,” Carson tells Bustle. “Our teams have become our families in ways we don’t experience with other teams. It’s where we’re able to be ourselves and make many of our best friends.”

More than 30 years on, IGLA has attracted hundreds of LGBTQ athletes from around the world to its almost annual competition, which has been held everywhere from Paris to New York City to Montreal. The competition generally takes place during the Gay Games’ off years.

Both TNYA and IGLA offer a chance for these athletes to showcase their skills in the events they love. They also provide a safe space many LGBTQ adults still want and need to this day, a more accepting setting than the one in which many of them grew up.

“Not all of these people identify as gay,” Nungaray says of TNYA. “Not all identify as straight. But every single person on this team has been there to work towards a common goal within a sport that we love ... and it is such a special thing to have a safe space where someone is there to give you love and support when you succeed and to give that very same love and support when you fail.”

Amelia Possanza, a lesbian speed swimmer who has swam since childhood and did so competitively throughout college, didn’t think there was more she could do with the sport when she graduated and moved to New York City in 2012. It was swimming as an out adult with TNYA that allowed her to fall back in love with speed swimming. Only now, she no longer felt out of place.

“[Queer representation] was never something I saw on my team growing up,” Possanza, who is now 28 years old, says. “I feel like it’s wonderful now. It’s like, wow, there’s a whole community of gay swimmers that I didn’t even know existed growing up.”

“It’s still really important to be with other gay swimmers, to be in a locker room, to talk about things I could’ve never imagined talking about to people when I was a teenager,” she adds.

The passion of the swimmers, all ranging in age, skill level, and sexuality, is not lost on synchronized swimming team coach Shaina Dinsdale.

“As an adult, you choose what you put your time into and these guys show up to practice because they absolutely love what it brings to their life,” Dinsdale, who describes herself as a hetereosexual ally, explains. “They bring that passion to every single practice they come to. As a coach, that’s deeply satisfying.”

While it was easy to dive into her role with the team, having been a synchronized swimming coach in her native Canada, the specific significance of working with a queer-inclusive swim team was a bit harder for Dinsdale to grasp at first.

“I had some great discussions with a few of [the team members],” she says. “They explained it to me in terms of it being a safe environment, that sports still aren’t a safe space.”

While TNYA has helped Nungaray and Possanza feel at home, it’s also helped Dinsdale understand more fully the discrimination that the LGBTQ community faces. She recalls one moment from the 2018 Gay Games in Paris that she credits with helping her become a better ally.

According to Dinsdale, one judge at the games who claimed to be an ally ended up expressing “deep-seated biases about gender norms and gender rules and how you should behave and dress” when male swimmers opted to wear more “feminine” bathing suits, as she puts it. That experience reminded Dinsdale of the continued need for queer-inclusive spaces.

“It opened my eyes, and I realized, ‘Oh, you still have to fit into specific norms as athletes,’" she says. "They’re much more deep-rooted than I ever realized.”

For Nungaray, TNYA helped her mom begin accepting her daughter’s sexuality. It was seeing Nungaray interact with her teammates during a team event that made her mom realize how happy she was, Nungaray says.

“TNYA played a pretty big role in helping me find my ‘happy’ in the city and during my own coming out process,” she adds.

TNYA is hosting the 2019 IGLA Championships, which will be the 25th competition since its founding. It is slated to be the largest thus far, with 1,500 international athletes coming to New York City from June 24 to 29. Beyond the actual events, athletes will also perform the famed Pink Flamingo drag and dance show at the end of the championships, tackling pop culture and politics through song and dance in the pool.

The championships come at an important time for the LGBTQ community. They overlap with Pride month and come amid the 50th anniversary of the Stonewall riots, which is June 28.