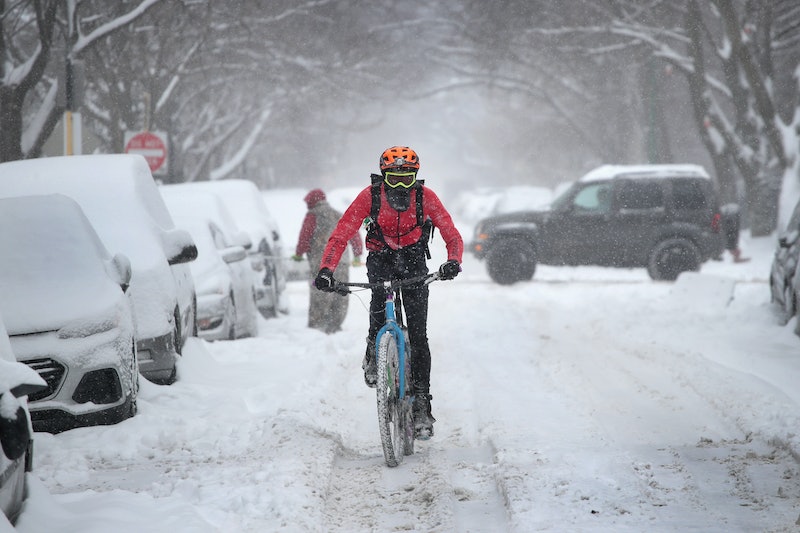 Much of the U.S. is in the midst of experiencing very cold temperatures right now due to the polar vortex. So, if you want to know how long you can stay outside in extremely cold weather, it's a logical question to ask for your safety of the safety of those around you. Wrapping up in a heavy coat and hat isn't always going to cut it.

Three of the major health issues that can occur in very cold weather are hypothermia, frostbite, and heart attack, according to Healthline. The site explains that hypothermia "occurs when your body temperature drops below 95°F (35°C)" and "results from your body losing more heat than it can make." Frostbite is when the skin is damaged from the cold, and can include blisters, white/gray and waxy/hard skin, and, in the most extreme cases, the skin turning black. As for heart attacks, the risk of one increases in extremely cold weather because "your heart works harder to keep you warm — leading to increased heart rate and blood pressure."

According to CBS News, hypothermia can develop in as little as ten minutes in temperatures of -30°F and in as little as five minutes in -50°F, if a person isn't dressed properly and has any exposed skin, particularly the scalp, hands, and face. CBS also reports that the amount of time it would take for someone to freeze to death depends on the specific conditions, "but death can occur in under an hour if conditions are dangerous enough." According to the National Weather Service, "Hypothermia can occur in temperatures as warm as 60°F, particularly in water or with if [sic] you are outside a long time and not dressed for the weather." The NWS also notes that most people who are killed by hypothermia are seniors, but that it can affect anyone.

In 2014, Business Insider published a chart from the National Weather Service that shows how quickly frostbite can develop depending on the windchill. For instance, if the temperature is 0°F and the wind speed is 20mph, frostbite can occur in 30 minutes.

It is crucial to stay indoors and/or take other precautions during extremely cold weather. The New York Times reported on Thursday that 21 people had died as a result of this particular polar vortex. This includes people who died in traffic accidents related to the weather, due to hypothermia, and more. CBS Minnesota reported of a 22-year-old who died, seemingly of hypothermia, after he was locked out of his home. According to the report, police say Ali Gombo was dropped off by friends after going out to a bar. "It’s believed the doors and windows were locked and he didn’t have keys to get inside. He apparently tried knocking to see if his sister would let him in," the report continued.

For more information on hypothermia, frostbite, and other cold weather health issues and how to be prepared for cold weather, check out the Centers for Disease Control and Prevention's winter weather page here. The National Weather Service also has safety information here.