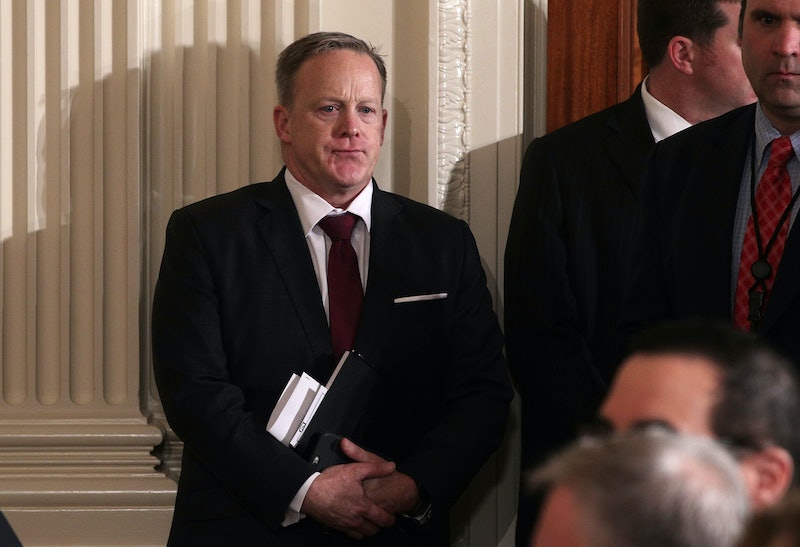 Let's face it: You're shocked, but not surprised. On Friday, White House Press Secretary Sean Spicer handed in his resignation to president Donald Trump, citing displeasure over Trump's decision to hire Anthony Scaramucci as communications director. This begs the question: Just how long did Sean Spicer work for the president, who celebrates six months in office this month?

Unlike anything else about Spicer's time in the White House, this one has a simple explanation. Spicer had worked for the president for, well, the entire time Trump has been president, e.g. from midday on Jan. 20 all the way through to present day (July 21). That's almost exactly six months to the day that Trump became president. Spicer lasted six months and one day before handing in his resignation — which, although a reasonably short period, still does not make his 182-day tenure as press secretary the shortest in presidential history. Amazingly, there are a legion of press secretaries who lasted for far less time, like Jonathan Daniels, who served for 19 days before the death of Franklin Roosevelt.

Spicer's exit was not without controversy. Following Trump naming Scaramucci as the new communications director — a decision that Spicer had reportedly fought against, according to The New York Times — Spicer offered his resignation in protest. According to the paper, Trump suggested that he remain in a more junior role to Scaramucci, but Spicer refused to accept his offer.