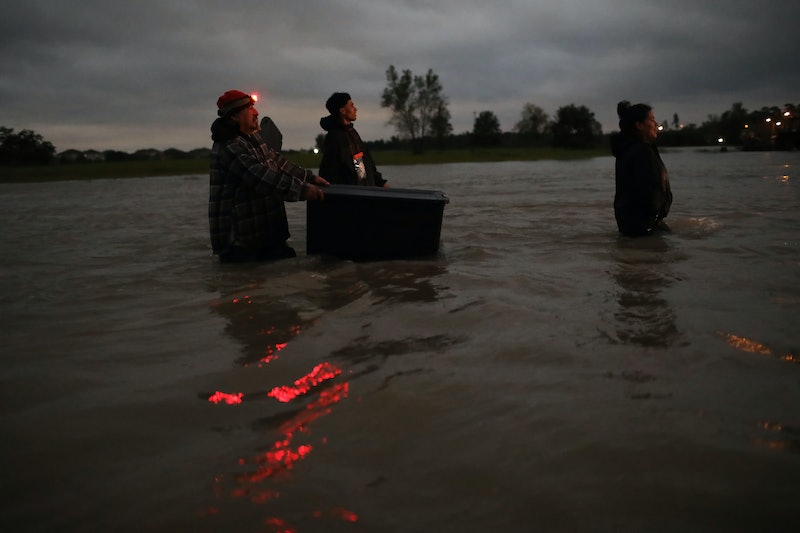 Early Wednesday morning Hurricane Harvey flooded Jefferson County's city of Port Arthur, forcing residents to seek shelter at evacuation centers while others wait in their homes to be rescued. In the span of a few hours, between 10-15 inches of water fell on the area — with rising water levels reaching above 35 inches. While the rain poured on southeastern Texas, Harvey also made landfall in Louisiana near the small town of Cameron off the Gulf of Mexico. Given the quick and terrifying impact of Harvey, many are wondering: how long do floods last? Is there a typical point at which this peters off?

Technically, there is no set time limit for floods in general, since elements of topography, rainfall rate, and climate all factor into the bigger picture. However, according to the The National Weather service, flash floods are defined as a "flood which is caused by heavy or excessive rainfall in a short period of time, generally less than six hours."

While this certainly doesn't provide a definitive answer on how long Port Arthur or other Texas cities will be flooded by Harvey, or exactly what residents in Louisiana should expect, it does provide a basic framework for the more extreme flash flood emergency conditions that occurred early on Wednesday.

On Wednesday, forecasters warned that "catastrophic and life-threatening flooding will continue in and around Houston eastward into southwest Louisiana for the rest of the week."

As Harvey continues to rain heavily on southeastern Texas, Motiva Enterprises,the biggest crude oil refinery in the U.S. located in Port Arthur, has temporarily shut down. The rising water levels have made the concept of "business as usual" not only irrelevant, but physically dangerous.

"Many Texans in and around Beaumont [and] Port Arthur are fighting for their lives against an incredible amount of water. This is just as bad, if not worse, than flooding in Houston," said NBC News Meteorologist Bill Karins.

Meanwhile, the implications for Louisiana continue to unfold. The National Weather Service warned that the "expected heavy rains spreading northeastward from Louisiana into western Kentucky may also lead to flash flooding." So, even as the rains slow in Texas, it's plausible they'll pick up in Louisiana.

According to a report from IFL Science on Tuesday, Hurricane Harvey has dumped 15 trillion gallons of water on Houston already. What's more, a prediction published by Forbes estimates a total of 25 trillion gallons of flooding will hit Houston before Harvey fully dissipates. Circling back to the question of how long floods last, well, it truly depends on the type of flood, and how long the rain decides to stop for. For areas affected by Harvey, it looks like it may last a while.

More like this
Winter Sucks, But These 42 Cozy Things on Amazon Will Make It SO Much Better
By Erica Gerald Mason
Any Of These 45 Cheap Things Could Make You Look So Much Better
By Mackenzie Edwards
6 Anti-Police Brutality Organizations You Can Support Right Now
By Syeda Khaula Saad and JR Thorpe
Twitter Has *A Lot* To Say About The "Single Penalty”
By Sam Ramsden
Get Even More From Bustle — Sign Up For The Newsletter
From hair trends to relationship advice, our daily newsletter has everything you need to sound like a person who’s on TikTok, even if you aren’t.