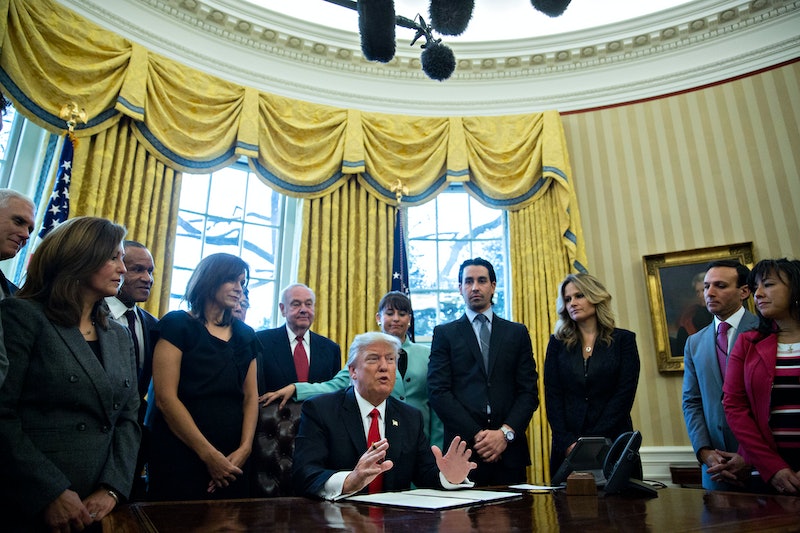 Although his political legacy is just getting started, Donald Trump's most memorable accomplishments might only last as long as his own presidency. Through his use of executive orders, Trump is leaving his landmark administrative actions extremely vulnerable to future repeal, because many EOs are immediately overridden by the next person to hold the office. Executive orders only last until they are overturned by the Executive or Judicial branch, and for Trump, that could be much sooner rather than later.

An executive order will stand until one of two things happens: either another president overturns it, or a court rules it unconstitutional. The "global gag rule" executive order that Trump signed last week is a good example of the first condition. The rule has been killed and resurrected along party lines by every president since Ronald Reagan — it's not an especially influential policy, so it's left as a matter of preference to each president.

The second condition would be much tricker to achieve. Only two executive orders have ever been overturned by the court system — one issued by President Gerald Ford in 1952 and one by President Bill Clinton in 1995. There could be two reasons for this relatively unprecedented phenomenon. First, presidents presumably undergo a lengthy vetting process for their executive orders to ensure that everything is above the law, not wanting to bring unnecessary controversy upon themselves. The White House has a high concentration of law degrees per capita, so it makes sense that a couple dozens of them would check out any unilateral law the president is trying to enforce.

The other potential reason that not many EOs get challenged in court is that most throughout time haven't caused enough strife to warrant legal proceedings. Some prominent ones have included the desegregation of the military and the Emancipation Proclamation, but most are pretty uninteresting from the lay perspective. In recent years, however, political polarization has forced congressional inefficiency to skyrocket, prompting presidents to pick up the slack through executive orders.

EOs are getting more controversial as a result, and presidents are increasingly accused of overstepping their constitutional authority when they really just seem to be filling in the gap left by a Congress that won't do its job. Therefore, more EOs may be challenged in court in the future, including Trump's hotly debated ones right now.

The good news for the lifespan of executive orders is that parties never stay in the Oval Office for too long. Even if Trump somehow manages to make it through two terms and get another Republican elected after him, it would be completely unprecedented for his executive orders to last more than one term after he leaves office.

People are always looking for greener grass, which is why power is flip-flopped between parties so often. History shows that the majority of the American will soon be calling for change from Trump to something different, at which time many of his dangerous and divisive policies will probably be left in the past.