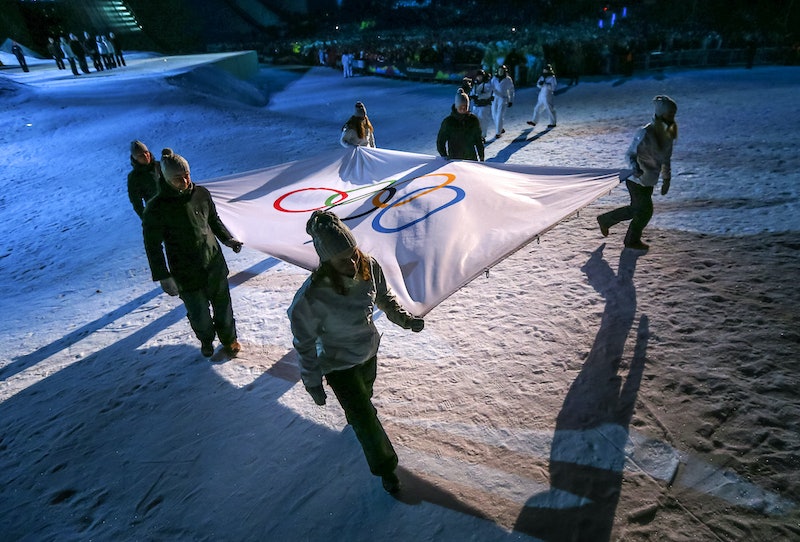 Once the wait for the Winter Olympics was finally over, viewers wondered what to expect for one of the most anticipated events, the one before any of the sports competitions: the 2018 Olympics Opening Ceremony. Namely, how long is it, what's the itinerary, what will the U.S. Olympic team be wearing, and who's going to be there.

The 2018 Winter Olympics in PyeongChang, South Korea will kick off on Friday, Feb. 9 at 8:00 p.m. Korean Time, which means an early morning wakeup call of 6:00 a.m. on the U.S. East Coast. It is scheduled to last two hours, which makes it a relatively short opening ceremony compared to ceremonies past.

The runtime has differed for each Olympic Games. The opening ceremony for the 2016 Summer Olympics in Rio, for instance, clocked in at nearly four hours, but the last Winter Olympics, the 2014 games in Sochi, Russia, finished at a significantly speedier two hours and 40 minutes. The length has also depended on the performances planned and how long it takes the participating countries' delegations of athletes to make their round in the traditional Parade of Nations.

Regardless, the opening ceremony has always been seen as the welcome party to the Olympics, full of patriotism, pomp, and of course, showing off for the host nation. Host countries spend years and millions of dollars preparing for the games.

This year's opening ceremony took place at the PyeongChang Olympic Stadium, which was built specifically for the games. It seats 35,000, but won't host any of the Olympic or Paralympic sporting events — the stadium is only be used for the opening and closing ceremonies.

The opening ceremonies in years past have attracted hundreds of millions of television viewers worldwide, and have featured a program that highlights the culture, history, and celebrity figures of the host nation.

The Rio Olympics, for instance, featured supermodel Gisele Bundchen strutting out and the many variations of Brazilian music and dance: funk, samba, breakdance, capoeira, to name some. Host nations are under pressure to put on a spectacular show as they're under public scrutiny, especially if there's any controversy surrounding their Olympic plans.

The Parade of Nations has usually been a moment for humor and fashion judgement. At the Sochi games, more than 2,800 athletes from 88 countries competed. And each country's delegation has always had the choice to go either the flashy route (see Tonga's shirtless, oiled up flag bearer) or the subdued route.

Most of the 200-plus countries chose to dress their athletes, the finest and most powerful physical specimens each of their lands could produce, in something of a cross between a real estate agent and a flight attendant's uniform.

(The blogging pair did acknowledge that the Olympics is not a fashion event.)

One of the most anticipated moments of the night is the final handoff in the torch relay and discovering which celebrated figure will light the Olympic flame. At the 2014 opening ceremony in Sochi, Irina Rodnina and Vladislav Tretiak lit the cauldron. Rodnina won three successive Olympic gold medals in Figure Skating pairs in 1972, 1976, and 1980. Tretiak was a goalkeeper on the Soviet Union's national ice hockey team that won three gold medals in 1972, 1976, and 1984.

This year there was, of course, one massive hole for Russia after the I.O.C. banned it from the Winter Olympics for its wide-scale, state-sponsored doping scandal. Uncorrupted Russian athletes are still allowed to compete under a neutral Olympic flag and a uniform bearing the name "Olympic athlete from Russia."

As the games continue, you can check out Team USA's Twitter account to keep you up to date during these couple of weeks you turn into a patriotic sports zealot.