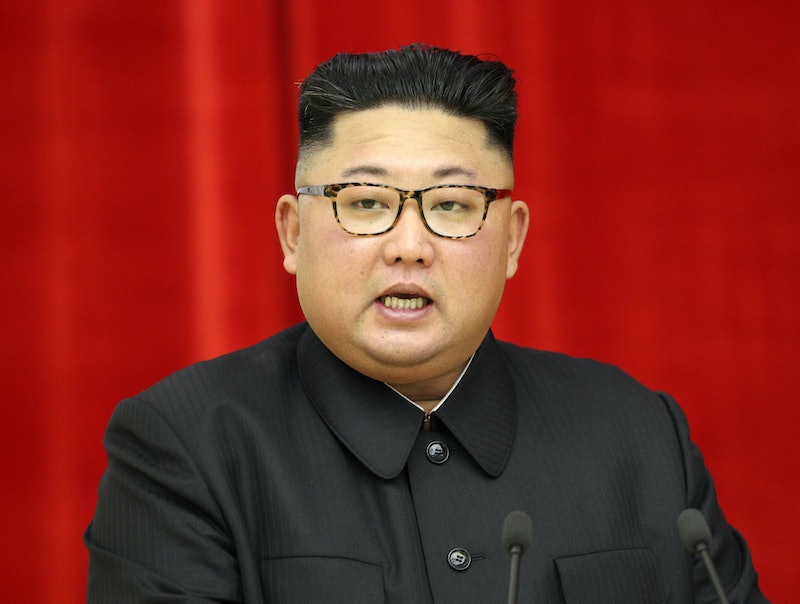 From Feb. 27-28, the president of the United States and North Korea's leader will meet in Hanoi, Vietnam, for the second summit between the countries. Not much is known about the notoriously secretive country, but some details have been reported about Kim Jong Un and how long he’s led North Korea.

In December 2011, Kim became the leader of the Democratic People's Republic of Korea, or the DPRK, after his father and the former supreme leader, Kim Jong Il, passed away. He became the chairman of the Workers' Party in 2012, according to Agence France-Presse (AFP). AFP reported that Kim carries some other hefty roles as well: he chairs the Central Military Commission, the State Affairs Commission, and is the "Supreme Commander" of the North Korean People's Army.

Kim studied at physics the Kim Il Sung University, then got another degree as a military officer from the Kim Il Sung Military University, according to The BBC. While Kim's age is not officially known, the United States government has claimed that he was mostly likely born on Jan. 8, 1984, which would make the North Korean leader 35 years old. This reported age makes him remarkably younger than Trump, his American counterpart, who is 72.

While foreign policy experts have tried to give their predictions of what will happen at the Hanoi summit, Trump has downplayed expectations. On Friday, when asked by the press about America's emphasis on North Korean denuclearization efforts, Trump said, "I'm in no rush for speed. We just don't want testing."

In June 2018, Trump and Kim released a joint statement at the Singapore summit, their first ever encounter, claiming that both the U.S. and North Korea were making sincere efforts to achieve peace on the Korean Peninsula. "President Trump committed to provide security guarantees to the DPRK, and Chairman Kim Jong Un reaffirmed his firm and unwavering commitment to complete denuclearization of the Korean Peninsula," the statement read.

While there is intense secrecy surrounding Kim's life when it comes to basic details like his birth date, other aspects of his personality have been well-documented, including his love for basketball.

In 2009, Kim's friends told The Washington Post that, as a high school student, Kim was less interested in political affairs and more keen on drawing sketches of Chicago Bulls legend Michael Jordan. The friends claimed that Kim's apartment was covered in "American basketball paraphernalia."

With the Hanoi summit around the corner, some foreign policy experts are trying to gauge what the gathering will yield. Park Jiyoung, who is a nuclear analyst for the Asan Institute for Policy Studies in South Korea, told NPR, "Because North Korea is so tight-lipped about what it's willing to offer, we can't expect too much." It looks like only time will tell.