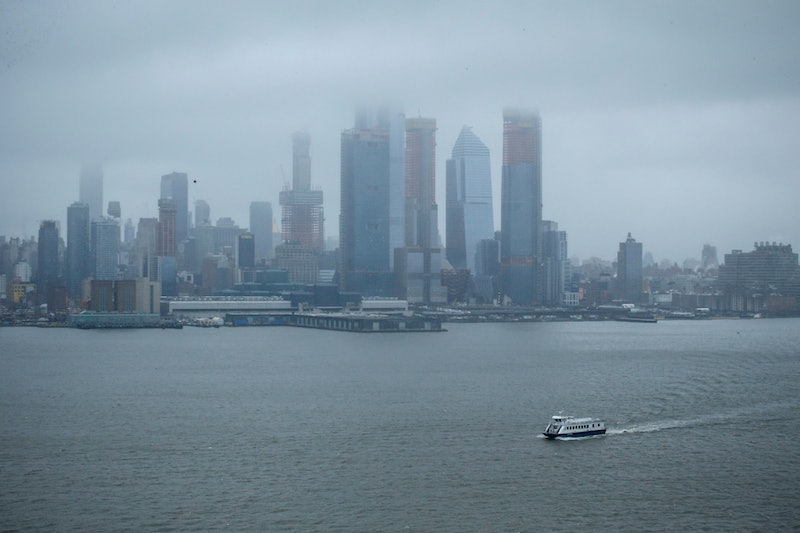 Just days after Winter Storm Riley produced a bomb cyclone in the Northeast, Winter Storm Quinn has reportedly brought thundersnow to the region. Between that, the dangerous commuting conditions, and the strong winds, people in the Northeast likely want to know: How long will the winter storm last?

The National Weather Service's New York-based Twitter account tweeted early Wednesday afternoon that not only had the snow begun to stick in the city, but also that there had been sightings of thundersnow in Manhattan. According to the NWS, "thundersnow" refers to the phenomenon of lightning striking during a snowstorm, made possible by shallow layers of unstable air.

Most areas along the I-95 corridor — the East Coast's main highway — will likely see the worst of the storm on Wednesday afternoon and evening, with conditions expected to improve by Thursday morning. According to the Washington Post, Quinn — which, like Riley, is a nor'easter — has the potential to produce a significant amount of thundersnow, and is already projected to deposit at least a foot of snow in certain regions along the I-95 corridor.

The Post also reported that Quinn will leave the Northeast by Thursday morning and venture in the direction of the Canadian Maritimes.

In both length and severity, Quinn is not expected to be as bad as Riley. Although Quinn is expected to produce more snow near major cities in the Northeast like New York and Boston, it is not projected to yield nearly as much coastal flooding. Forecasters have also predicted that Quinn will produce slower wind speeds than Riley — an average of roughly 40 miles per hour, compared to Riley's average of 70.

The biggest concern about Quinn seems to be its impact on recovery efforts following Riley. Riley produced a bomb cyclone in the Northeast, ultimately killing multiple people. The storm also generated power outages across the region, and tens of thousands of people were reportedly still without power when Quinn arrived in the Northeast. Consequently, as New York Gov. Andrew Cuomo pointed out, Quinn will not just bring snow, rain, and wind with it; it will also likely hinder repair and recovery efforts that are still ongoing.

Nonetheless, AccuWeather meteorologist Alex Sosnowski suggested that Quinn would likely be a more typical snowstorm than Riley. However, the National Weather Service's Boston-based Twitter account advised people in the region to be wary of fallen trees, reduced visibility, and power lines snapped by strong winds.

The NWS Boston account has also routinely reminded its followers that forecasts about Quinn are highly uncertain. Many meteorologists have pointed out that the I-95 corridor appears to be a dividing line — rain is expected to the east of the highway, while snow is expected to the west. But if forecasts shift even slightly, as The New York Times indicated, cities like New York and Boston could quickly see much harsher conditions than they initially expected.

As the storm progresses and the snow starts to stick, Quinn's likely impact on the region will become clearer. But for now, the NWS has reminded people in the Northeast that there are still winter storm warnings and winter weather advisories in place across the region, and the service's twitter account has been posting safety tips to its primary Twitter account.

Winds, rain, and snowfall are expected to peak Wednesday afternoon and evening, but the storm's impact has already been widely felt. CNN reported that more than 2,400 flights were canceled on Wednesday alone, and Amtrak has canceled some of its train service in the region. The storm should leave the Northeast for the Canadian maritimes within a day, but it is nonetheless expected to leave behind quite a bit of damage.

More like this
The 10 Best Winter Walking Shoes For Snow, Rain & Everything In Between
By Maria Cassano
Your December Astrological Forecast
By Nina Kahn
10 Holiday Fashion Picks Our Senior Editor Can't Stop Wearing
By Kelsey Stiegman
30 Winter Outfit Ideas Courtesy Of Hailey Bieber, Rihanna, & More
By Dominique Norman
Get Even More From Bustle — Sign Up For The Newsletter