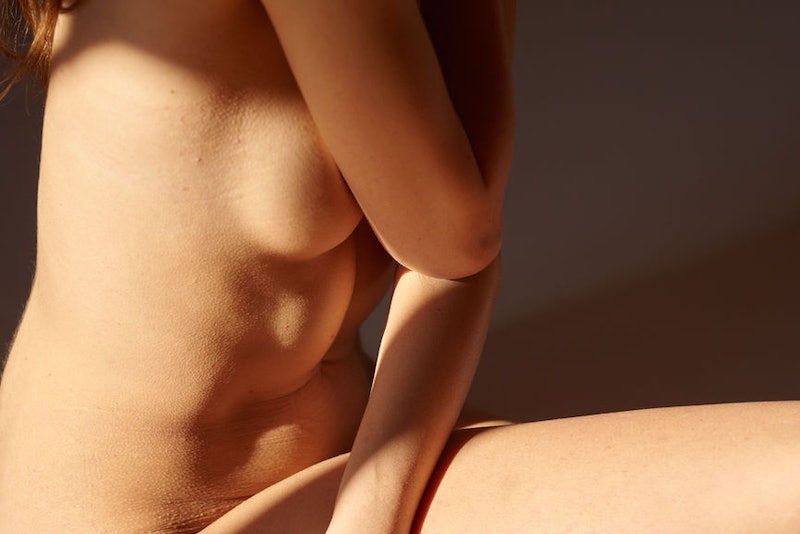 When I first got diagnosed with breast cancer at 27, I never thought I would miss my nipples — I never really liked them anyways. I always thought they never seemed big enough, or "womanly" enough. I even had an inverted nipple at one point — which eventually grew out — but I remained self-conscious about it, especially when I was getting intimate with my main squeeze. But once I found out that my cancer was so aggressive that it would’ve taken my life if I didn’t operate immediately, the ambivalence I felt towards my nipples began to fade. I knew that it wasn't about saving the nipple, it was about saving my life. Yet, I couldn't help but feel like I saying goodbye to a piece of me.

The doctor gave me two options when it came to my mastectomy — the first was to keep my breasts, remove the cancerous tumor, undergo aggressive rounds of radiation to stop the growth, then cross my fingers for clear margins. This would be the better choice aesthetics-wise, but it also meant I was in for a lifelong cycle of going from ultrasound, to MRI, to mammogram every 6 months. Option two — the option I chose — was to remove both breasts entirely, nipples included.

At the time of my diagnosis, in 2010, nipple-sparing options were limited. The only way I could keep my nipples would be to remove them, store them, and attempt to reattach them after I healed from the mastectomy. But the likelihood of this procedure actually working was pretty slim. I was even warned — mainly by other breast cancer patients — that the nipple could fall off, because some of theirs had.

On the eve of my mastectomy, I was scared out of my mind. I had never experienced fear at this level before. But I still decided to use this time to celebrate my body. I let the girls out for one last night on the town for a final chance at a nip-slip in my "Ta-Ta to Dana's Ta-Tas" extravaganza. That night, me and a few of my girlfriends, along side my fiancé, and their hubbies, went out dancing to have one last hurrah before surgery. I felt liberated in a way, no bra, just a low plunging dress and a lot of shimmy shakes on the dance floor. I felt alive, yet scared. I felt strong, yet weak. I don't think I ever really fully realized what I was in for, but knew this was my way of saying good-bye to my (not-so healthy) breasts.

The morning of my mastectomy was a bit of a blur. Thanks to the very few pictures that were taken of me, I remember my fiancé's hand on my cancerous breast, and a blurry quick photo of my boobs under my hospital gown before we got caught, and before they were removed from my body. I remember my plastic surgeon coming in and drawing the diagram I had seen many times before, but this time, it actually soaked in. The eyeball-like shape around my areola, that would demonstrate how they were to cut open my breast to remove the tissue, starting with the point of my nipple.

After my surgery, there was no choice but to bare my new chest to myself in the mirror once I got home, and it's an experience I can only describe as traumatic. I looked like a sliced up, diced up Barbie doll. There was nothing there, except for bruising, horrible mastectomy scars, and an oddly shaped, flat, nipple-less boob. It was like a car accident, and I couldn’t look away.

For months following, I would only glance at myself over my shoulder as I quickly and swiftly walked past the mirror in the bathroom every morning after my shower. Looking at my reflection, my eyes had no where to land when I looked at my chest. I started to feel like that young girl all over again, afraid to bare my breasts to anyone — and myself — because something wasn't quite right.

Even when my reconstruction was complete, my new breasts didn't feel like they were mine. They were foreign and I felt that. But I wanted to take back control, I wanted to start making decisions, I wanted my body back. So I made a choice.

Rather than reconstructing my nipples, knowing that they would not longer bring my pleasure, I chose to get a tattoo that would adorn my mastectomy scars, something beautiful to look back at me in the mirror. Through this process, I've learned that my breasts and nipples do not define me. I am not any less of a woman, any less sexy, or any less feminine whether or not I have nipples.

I’m proud that at through my company, AnaOno, which creates soft bras for those experiencing breast cancer or undergoing surgery, we’ve been able to push the boundaries and challenge these rules. At our first NYFW show we made incredible strides by showing mastectomy scars and nipple-less breasts, covering up natural nipples when we had to, but showcasing the real and the raw, of our nipple-less, scarred, and SEXY breasts, foobs, or flat and fabulous bodies. Some wore fake nipples, some had none, some had duct tape on them, and it was all beautiful. Since then, for three consecutive years, we've shown at NYFW, continuing to change the conversation about cancer, and our bodies.

Every single one of our models in the show, and on our website, are people with breast cancer, fighters, survivors and thrivers, showcasing their real and beautiful bodies. On social media, we share our scars, our stories, our breasts, and our foobs, and sometimes, a hint of a nipple. This sadly often comes with a threat to our business by being punished by the social gods that shut down our profile because of our awareness efforts. But it’s important that we talk and share about our bodies, what they’ve gone through, and show that it is all accepted, celebrated, and sexy.

So what’s a girl to do when all she wants to do is show off a little nipple, whether it’s under a shirt, for foreplay, or just because it helps make her feel whole, but she doesn’t have any? It’s time we join in on the conversation, challenge these rules, and have a little fun. Options, however, are limited to those with breast cancer. But the good news is that they still exist.

Before going into surgery, ask your doctor about nipple sparing techniques and possible nerve regeneration. “Many people are candidates for a nipple-sparing mastectomy which saves the nipple and areola along with the breast skin," Dr. Minas Chrysopoulo, President of PRMA Plastic Surgery and creator of the Breast Advocate app, shares with me. "In appropriate candidates, a nipple-sparing approach can significantly improve the final cosmetic result and is safe [and doesn’t negatively impact the cancer treatment or outcome]."

However, the MD does go on to explain that sometimes, feeling may not return to the nipples. "Most women experience numbness after a mastectomy, irrespective of whether they save the nipple-areola complex," he says. "But we do know that saving the nipple and areola improves sensation that returns over time." Dr. Chrysopoulo goes on to explain that nerve reconstruction can help to restore nipple sensation. "While nothing restores the feeling Mother Nature provided, nerve reconstruction helps improve the return of feeling, both in terms of the amount and quality," he adds.

For those who aren't able to keep their nipples, 3D areola tattoos are another great option. There are an array of amazing artists who specialize in permanent ink, like Vinnie Myers, or Beth Fairchild, and Tara — who are breast cancer patients — at Pink Ink Tattoo. Survivors can even test out temporary tattoos from companies like Nipplebacks.

I am also personally a fan of brands like Pink-Perfect or Just Nips, which both create hand crafted, hand painted, beautiful nipple replacements that are temporary and amazingly similar to the real thing. Each of these products work beautifully under any AnaOno Bra, for that fun, but flirty look. Think Samantha Jones on Sex and the City. Nips today, gone tomorrow.

It wasn't until recently that I really began to mourn the loss of my nipples, again. It started with all the free-the-nipple activities in the media, which was just a stark reminder that there was one more conversation I was going to be left out of because cancer took that away too. But as much I am consistently experiencing nipple envy, I am still happy to have choices even after all these years! It’s time we are proud of our bodies, that we reclaim them, that we show them off, and show the world what real beauty and breasts look like — even if you don’t have nipples.

More like this
15 Talc-Free Makeup Brands For Safer Eyeshadows, Powders, & More
By Audrey Noble
The Beauty Industry Disrupter From Dallas
By Jordi Lippe-McGraw
Berriez Founder Emma Zack On Her Size Inclusive NYFW Show
By Dominique Norman
This Week’s New Makeup Releases & More Beauty Headlines
By Audrey Noble
Get Even More From Bustle — Sign Up For The Newsletter