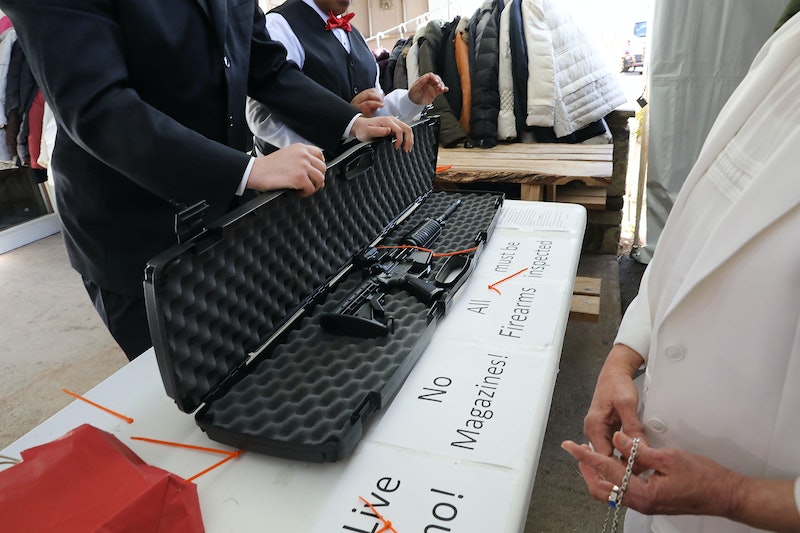 In order to regulate something, you need to know what you're dealing with. Without information about the size and scope of an issue, you might as well be tackling an invisible beast. Such, it seems, is the case for gun control in the United States. Despite lots of talk and debate around how and to what extent they should be controlled or banned, no one actually knows how many AR-15s are in America, because the law prohibits that the government keep track.

Specifically, the Firearm Owners Protection Act of 1986 (FOPA) prohibits "that any system of registration of firearms, firearms owners, or firearms transactions or dispositions be established." FOPA built off of the Gun Control Act of 1968, and the National Firearms Act of 1934 before it, limiting both of their purviews. The older two bills were primarily concerned with tracking gun sales so that the government could collect excise taxes on those sales, or else prevented guns from being sold to so-called "prohibited persons," such as certain criminals and non-citizens. FOPA prohibited the government from linking those gun sales to specific owners — meaning it banned any kind of registry.

Generally, these and other gun-related regulations are enforced by the Bureau of Alcohol, Tobacco, Firearms and Explosives (ATF), which isn't allowed to compile any of these figures in an accessible or easily searchable electronic database, according to McClatchy.

It's an age-old argument made by those who oppose gun-control, and it has its roots in the Second Amendment, which says, simply: "A well regulated Militia, being necessary to the security of a free State, the right of the people to keep and bear Arms, shall not be infringed." The amendment has been interpreted in several different ways by several different legal bodies and interest groups, but one key understanding remains: the Second Amendment intends to stop tyranny by way of an armed militia.

With this argument in tow, those who oppose gun control fear that if there were too many national facts and figures concerning who owns guns (and how many) federal officials could feasibly have all the tools they need to seize them. It's a fear easily traceable to the United States' conception as a country.

Advocates for gun control, however, generally seize upon regulating (and often banning) AR-15s in particular. Implementing such a ban would likely be an extremely tricky task. While ATF is not allowed to keep tabs on exactly how many of each types of guns are in the United States, they do publish reports on other types of gun statistics, such as gun manufacturing, as well as gun imports and exports.

According to the most recent ATF commerce report, about 9.4 million guns were manufactured in the United States in 2017 alone. Of those, about 3.7 million were rifles — the most out of the four categories provided. Of course, this doesn't specifically count AR-15s, but it does suggest that AR-15s fall into the most popularly produced firearm category.

One way to estimate how many AR-15s are in the United States would be to tally how many of them were manufactured in a given year, but which also were not ultimately exported. This tactic has been tried before. Slate reported that in 2009, NRA research coordinator Mark Overstreet tallied at least 1,626,525 AR-15-style semi-automatic rifles fit that description. That figured was based on his research and only accounted for AR-15s between 1986 to 2007.

The fact of the matter is that any data concerning the number of AR-15s in America is insufficient, inconclusive, and intentionally hard to come by. Ultimately legalizing and compiling a firearms registry would be no simple task. However, with mass shootings continuing at a rapid rate — and with so many mass shooters using AR-15s, a registry is certainly a compromise worth discussing.