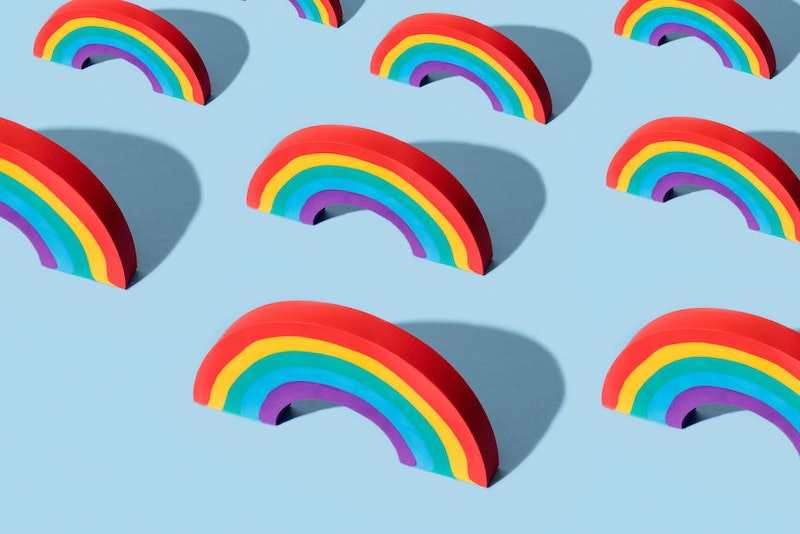 When celebrating Pride and supporting the LGBTQ community, it's important to know that not every company with a Pride campaign actually donates to LGBTQ causes.

It's one thing to offer Pride themed makeup palettes, T-shirts, shoes, and for some companies, even mouthwash and beer. This merchandise does show support, and it does make it easier to deck yourself out in rainbows. But it shouldn't stop there.

A 2019 study by the marketing experts at Reboot Online looked into 122 companies to see how much LGBTQ marketing they were doing, and revealed that only 64% of companies doing a Pride campaign donated to an LBGTQ cause. Researchers also spoke to 250 members of the LGBTQ community to find out how they felt about the increase in “corporate Pride.”

Eighty seven percent of respondents from the LGBTQ community said they felt that all corporations who were running a Pride campaign should donate the proceeds to relevant charities, adding there's even a word for those who don't: Rainbow Capitalism.

This is the notion that many companies run LGBTQ campaigns throughout Pride month without donating money to a relevant cause, and then fail to support the community throughout the rest of the year. It's contributing to the growing skepticism within the LGBTQ community about corporations involvement in Pride events.

Of the 250 members of the LGBTQ community that Reboot Online spoke to, 9% were so wary of Rainbow Capitalism that they would go as far as purposefully not purchasing brand's Pride tie-ins.

Companies involvement in Pride has been a hot topic of debate for almost a decade, with many famous faces weighing in. At the end of June 2019, Years and Years lead singer Olly Alexander shared his experiences with brands during Pride. On Instagram he wrote, “no matter where you stand on corporate brand Pride tie-ins it’s hard not to feel the 2019 Pride collection of mouthwash, t-shirts (socks shoes jumpers glasses hats ), banks, and sandwiches has felt especially icky.”

Alexander continued by saying, "The bare minimum approach here makes me laugh. Re-doing your logo in a rainbow and ‘dOnAtInG a PoRTiOn Of pRoCeEds’ is not enough!!!!(possibly not even happening with this brand!??)). I wish brands would realize how embarrassing this kind of s**t is."

While some feel super uncomfortable about brands getting involved with Pride, Reboot Online found that 84% of respondents felt “positively” in general about Pride campaigns with some stating they felt the “celebration of LGBT+ is great to raise awareness, especially to younger generations." However, a huge 96% of people said they felt corporations should “do more throughout the year to help LGBT+ causes, rather than just in Pride month.”

The good news is this year's Pride month has seen an increase in awareness, and it seems many more companies are doing it right. According to research from YPulse, younger generations (Millennials and Gen Z) are keeping an eye out for companies who may be "rainbow washing" or "virtue stealing," in order to ensure they aren't giving empty promises — and brands are responding.

One example is the skincare brand Kiehl's, which has sponsored the NYC Pride Parade since 2010. According to YPulse, the brand not only pledged $100,000 to The Trevor Project, a crisis intervention service for at-risk LGBTQ youth, they also announced a long-term partnership with the nonprofit. Kiehl's has also been sharing important LGBTQ facts on their Instagram page.

The shoe brand Reebok is also donating money to the tune of $75,000 to the It Gets Better Project. They're also releasing an "All Types of Love Collection" to go along with another campaign called "Proud Notes," which features activists and influencers in the LBGTQ+ community. (While also, of course, promoting their really cool rainbow shoes and socks.)

MAC Cosmetics has been known to support the LGBTQ community. According to USA Today, the company pledged to donate $500,000 to GLAAD over the course of two years, in honor of the 25th anniversary of its Viva Glam lipstick.

In years past, 100% of proceeds from Viva Glam have gone to those living with HIV/AIDS, but this year the company will be donating $10 million to help relief efforts in underrepresented communities that have been impacted by the COVID-19 crisis. Plus, they still have their Pride collection.

We have a long way to go when it comes to brands actually donating to LGBTQ causes during Pride month, and beyond. But these companies show it can be done, and by pledging money to nonprofits, are setting an important tone for the future.

Should Brands Use Pride as a Marketing Campaign? (n.d.). Retrieved June 25, 2020, from https://www.rebootonline.com/blog/brands-use-pride-marketing-campaign/

Stop the Rainbow-Washing: How Brands Are Marketing During Pride the Right Way. (n.d.). Retrieved June 25, 2020, from https://www.ypulse.com/article/2020/06/18/stop-the-rainbow-washing-how-brands-are-marketing-during-pride-the-right-way/

More like this
Gen Z Are Twice As Likely To Identify As Queer, According To New Data
By Sam Ramsden
Forestcore Is About To Take Over Your TikTok FYP
By Sam Ramsden
Pret & Costa’s Coffee Is The Strongest On The High Street, According To Which?
By Sam Ramsden
Here’s What TikTok's "Mascara” Trend Is *Really* About
By El Hunt
Get The Very Best Of Bustle/UK
Sign up for Bustle UK's twice-weekly newsletter, featuring the latest must-watch TV, moving personal stories, and expert advice on the hottest viral buys.