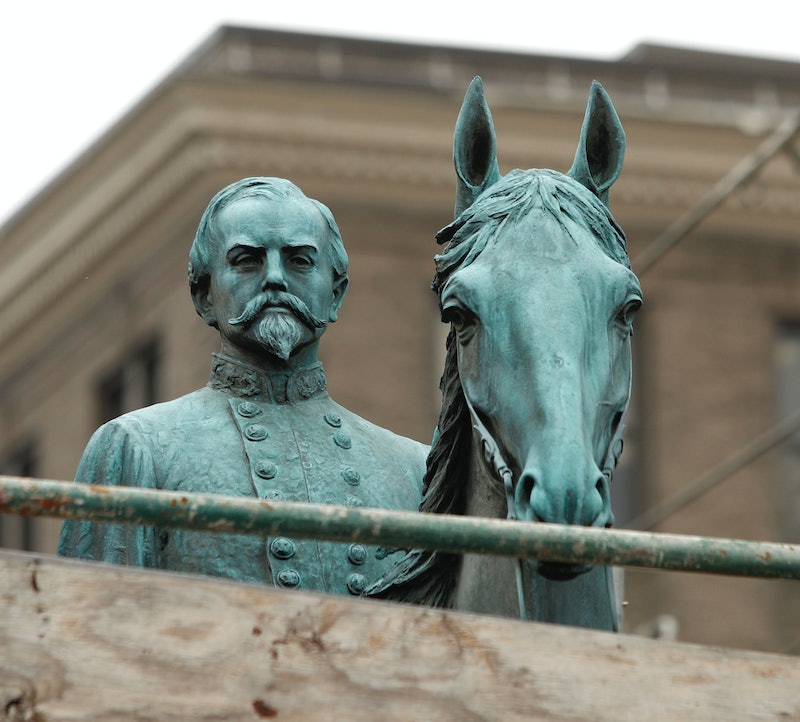 After white supremacists and Neo-Nazis gathered in Charlottesville, Virginia to defend a statue of Confederate general Robert E. Lee, state and city leaders all over the country have started calling for the removal of other Confederate monuments from public spaces. But just how many Confederate monuments are there in the U.S.? A 2016 report from the Southern Poverty Law Center identified 718 Confederate monuments and statues scattered across the country — and not all of them are found in Southern states. This number does not include the schools, cities, counties, or holidays that honor the Confederacy in some way.

The SPLC report indicated that almost 300 of the statues were located in Georgia, Virginia, or North Carolina. However, Confederate monuments — possibly up to 1,000 total, according to USA Today — can be found in 31 states as well as in the District of Columbia. In fact, there are two such monuments located in Arizona, quite far from the Confederacy, and even one in Massachusetts — which, during the Civil War, was known for being a loyal Union state.

Moreover, although the majority of the statues are over 60 years old, more than 100 of these Confederate statues were installed after 1950. In fact, 32 monuments and other symbols of the Confederacy have been dedicated or rededicated in the past 17 years alone. The SPLC created a timeline of when different Confederate monuments were erected, and it is worth noting that their construction rates peaked twice: once after Plessy v. Ferguson, which upheld racial segregation laws, and again at the height of the Civil Rights movement.

After this past weekend is Charlottesville, officials in Baltimore, Dallas, Memphis, Jacksonville, and a number of other cities have announced that they would proceed with the removal of Confederate statues, or pursue initiatives to do so if they are not already in motion. Many of these monuments are memorials to Confederate soldiers, according to the SPLC, but there are still some monuments in place that honor and glorify what the Confederacy represented.

At least 60 Confederate symbols have been removed since 2015, when Dylann Roof, a white supremacist, murdered nine black churchgoers in Charleston, South Carolina. However, there are still hundreds all over the country, and activists have escalated efforts to remove them — either by seeking policy change, or by manually toppling them as demonstrators recently did in Durham, North Carolina. Although some people defend the monuments by arguing that they are part of history and heritage, these Confederate statues have long been symbols of white supremacy and racial violence, and it is clear that efforts to remove the hundreds that remain across the country will only increase following the events in Charlottesville.