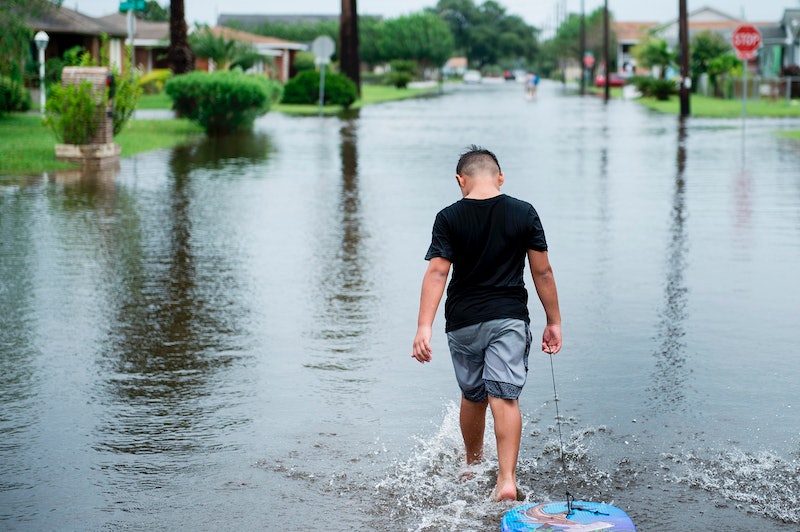 On Sunday, news emerged that President Donald Trump has reportedly decided to eliminate the Deferred Action for Childhood Arrivals (DACA) program, something which would profoundly impact the lives of the nearly 800,000 DACA recipients in the United States. Moreover, some individuals recovering from Hurricane Harvey are DACA recipients — also known as Dreamers — meaning they now are facing double uncertainty as they recover from the storm and await Trump's final DACA decision.

As Univision reported on Saturday, Texas is home to 271,000 DACA-eligible beneficiaries — and 68,000 of them are located in Harris County, which houses Houston and was profoundly impacted by Hurricane Harvey.

The outlet also reported that, in addition to likely being victims of Harvey, Dreamers are also actively working in recovery assistance. Indeed, Univision told the story of three Dreamers who immediately jumped in to assist Harvey victims in the wake of the storm: a volunteer who organized firefighter logistics, a volunteer who ran a Spanish language Harvey helpline, and another volunteer who offered assistance to evacuees in shelters.

Carolina Ramirez, the DACA recipient who provided assistance to Harvey victims via a helpline, described the uncertainty felt by many immigrants (DACA recipients and otherwise) in Harvey's wake.

We have been called by families, many of them undocumented, saying their houses are ruined. They want to know where to go. Or they can’t leave yet because they are surrounded by water, or they don’t know where to get food.

Moreover, Buzzfeed also described the story of a Houston paramedic and DACA recipient, Jesus Contreras , who spent six days straight rescuing people from flood waters after Harvey. Contreras shared his feelings about the challenge of not knowing the future of the DACA program, particularly as he is also recovering from Harvey.

Hearing that my future in the United States is being threatened and possibly taken away was disheartening, it was disappointing ... It was like getting an extra kick to the face when you’re already down.

In addition to DACA recipients, Houston's police chief, Art Acevedo, also commented to the media on Sunday about the additional challenges immigration uncertainty poses in the wake of Harvey. While not referencing DACA directly, the police chief did note the problematic nature of debating immigration status in the midst of storm recovery.

So many homes have been damaged and some beyond repair, in our state. And then you add on top of that all the issues with the immigration debate and all the ugliness of that. I was mentioning to somebody yesterday, a state official, that was pushing this anti-immigration ugly narrative. I asked him, 'Now what are you going to tell the American people, when we’ve scared away so many hard-working people?'

It is certainly tragic that much of Texas' immigrant community now faces additional uncertainty as it tries to recover from a devastating natural disaster. While Houston's mayor previously vowed to defend anyone who was seeking assistance during the storm and subsequently faced deportation, this likely provides limited comfort to DACA recipients and others who now face a very uncertain future — just as they are trying to get some sense of normalcy back in their lives post-Harvey.