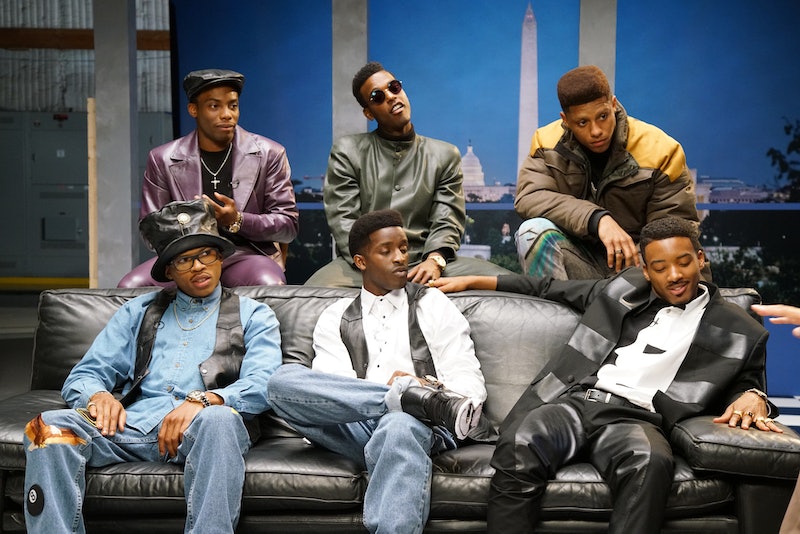 Lifetime may always cause a stir with its music biopics (I'm personally counting down the days until Britney Ever After premieres), but BET is serving up all the real-life drama you could ask for with much less camp in its current musical event. The New Edition Story premieres Tuesday, Jan. 24 at 9 p.m. ET on BET, and it's going to give one of the most famous boy bands in history the cinematic treatment. But considering the fact that the group formed nearly 40 years ago and its influence is still felt in the music industry today, I'm wondering how many episodes The New Edition Story will have and how much of the band's career it will cover.

Well, when BET advertises The New Edition Story as an "event," the network is not lying. The miniseries will air over the course of three nights with one two-hour episode airing each night beginning on Tuesday, according to BET.

The New Edition Story is going to pack more than 40 years of music history into those three episodes. The miniseries opens in 1978 as the group gets its start with members Bobby Brown (Woody McClain), Ricky Bell (Elijah Kelley), Mike Bivins (Bryshere Y. Gray), and Ralph Tresvant (Algee Smith) performing in local talent shows. The rest of the episode will follow New Edition as they're discovered by music svengali Maurice Starr (Faizon Love), gain a fifth member in Ronnie DeVoe (Keith Powers), and hit No.1 on the charts with their debut single "Candy Girl."

The rest of the miniseries will follow Bobby's growing bad boy behavior, leading to the band to kick him out, which is followed by Ralph's exit and the subsequent addition of Johnny Gill (Luke James) to the group. As Bobby's career heats up, all of his group members eventually follow with their own solo acts. Toward the end of the miniseries, we'll see the members of New Edition come together for a reunion tour, but it will only pull them apart as they all go their separate ways once again by the end.

Well, it certainly seems like The New Edition Story will give us a pretty comprehensive look at the career and legacy of this iconic band. I won't know for sure until the miniseries airs, but it seems like three two-hour episodes is just the right amount to tell this tale.

Of course, there doesn't seem to be any right or wrong amount of installments when it comes to a music biopic on TV. A feature-length film could be the right format for many projects in this genre, such as CrazySexyCool: The TLC Story or Behind the Candelabra. But many music biopics tend to be multi-part event series like The New Edition Story, such as The Temptations, The Jacksons: An American Dream, and The Beach Boys: An American Family. If the quality of The New Edition Story is anything like that of these aforementioned music biopics, all of which I highly recommend, it should be well worth three nights out of your week.